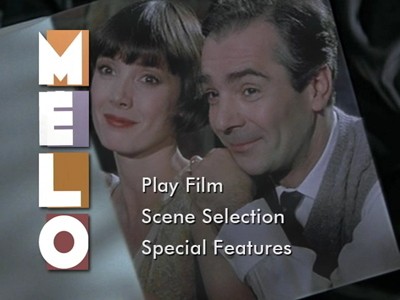 Alain Resnais' most famous films quite often revolve around doomed love affairs, and his most irascible, Last Year at Marienbad, is a challenging, elliptical rumination on the question of "did they or didn't they?" Rumor, memory, deception--the tools of the trade when it comes to illicit trysts. Twenty-five years after making an indelible impression on art-house cinema with Marienbad, Resnais returned to the same topic in 1986, but this time with the intention of removing all obfuscation. Mélo is a story of adultery where the cards are all shown, a melodrama that shares all its secrets and displays the consequences of each.

Set in 1926, contemporary to the original play by Henri Bernstein, Mélo is the tale of a love triangle between two friends and the woman they cherish. Marcel (Andre Dussollier, Tell No One) and Pierre (Pierre Arditi, The Horseman on the Roof) are longtime friends who both play the violin professionally. While Marcel has become famous, Pierre has had more modest success, complete with a more modest life. This includes a marriage to his young wife Romaine (Sabine Azema, A Sunday in the Country), a sprightly woman who looks like Louise Brooks and has a seemingly boundless infatuation with life. Following the dinner where she first meets Marcel, Romaine makes a date to meet him the next day, an appointment to make music--she will accompany his violin on the piano. Then again, there are other kinds of music a man and a woman can make together, isn't there?

The seduction of Marcel is one of many great scenes in Mélo, and one where Azema truly shines. She plays every trick: she is knowing and open, but also coy and demure; shameless, yet protective. She invites, then denies, and then accepts Marcel's advances when he finally propositions her as if it were his own idea. What begins as a lark quickly becomes heavy, however, and when Marcel is due to go on tour, large promises are made. Romaine vows to end her marriage with Pierre before Marcel gets back, a task easier said than done when Pierre grows gravely ill. Yet, here Resnais, who also wrote the screenplay, gets tricky, letting the melodrama veer into more pulpy territory, making suggestions of what the true cause of Pierre's illness is with just a few well-placed--and ultimately unexplained--hints. He even plays with the paradigm of good woman and bad, making Romaine the reluctant femme fatale in contrast to her more virtuous cousin (a lovely Fanny Ardant, 8 Women). 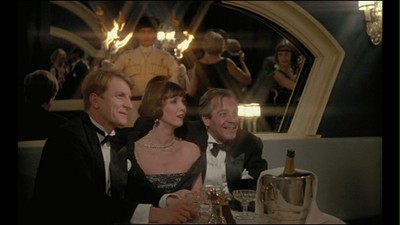 Resnais plays up the theatrical origins of Mélo, shooting long portions of the scenes as single, uncut takes, and dividing them with the image of a red curtain, the filmic fade-in/fade-out replacing the more physical raising and lowering. The opening credits are printed in a playbook, the pages being turned on screen. One could even say that he is recreating the notion of a stock company, as all of the main actors in Mélo would appear in multiple pictures from the director. All but Ardant were in his 2006 film Private Fears in Public Places, and both Azema and Dussollier are in his forthcoming movie, his 48th cinematic venture, Wild Grass. Amazingly, though, the director keeps Mélo from becoming overly stagey. Even as the actors talk, he moves the camera around them, never settling longer than makes sense on a single shot, choosing when to stand still, pan, or cut based on the emotional tenor of the script. His control of the film is remarkable. Each moment appears spontaneous, but the spontaneity that only careful planning can inspire.

As Mélo progresses, the secrets grow more pronounced, and the thrill of romance gives way to rash decisions and great despair. Sabine Azema as Romaine serves as the driving force throughout, but both male actors are excellent as the men driven to distraction in want of her. All the performances are compellingly physical despite all the scenes being confined to a single space (again, sticking to the theatrical convention). Though from a story standpoint it's easy to guess where certain moments will go, the actors make us want to see how it will all play out anyway. Perhaps that is the best testament to Resnais' control, that he knows when not to assert his style. Giving his performers the frame in which to move is enough.

I have to say, Mélo is a bit of a surprise. The 1980s weren't kind to a lot of artists, and it seems like we never hear much about Alain Resnais' movies from this period. Yet, Mélo is an excellent entry in the director's filmography, a solid descendent of Marienbad and a serious precursor to the lighter Not on the Lips (2003). It takes a true master of any craft to work with equal skill in both the abstract and the traditional, and with Mélo, Alain Resnais proves he is just such an artist. 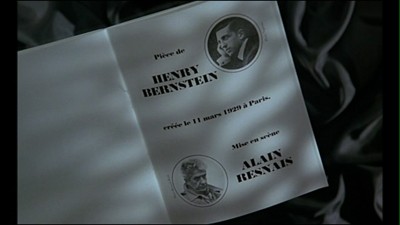 Though the Mélo DVD actually came out in 2008, this copy of the movie was sent out for review in anticipation of Kino's bundling of four of Resnais' 1980s movies into the boxed set Alain Resnais: A Decade in Film. From what I can tell, these are the exact same discs, just now in a box. DVD Savant reviews the set here.

Video:
Mélo was shot at 1.66:1 and the anamorphic transfer on this disc is really good. The colors and grain of the original film stock are preserved while still giving modern viewers a clean digital presentation. There is very little by way of surface noise, just a few stray marks or lines, and the resolution is quite fine.

Sound:
A basic mono mix is applied to the original French soundtrack, and it is also clean and clear. The optional English subtitles are well paced, and despite a handful of typos, full of character and easy to read.

Extras:
In addition to the theatrical trailer for Mélo, we also are treated to a thirteen-minute interview with producer Marin Karmitz, who collaborated with Alain Resnais on a couple of films, and who talks specifically here about Mélo.

FINAL THOUGHTS:
Highly Recommended. Mélo is a fascinating, emotionally rich bedroom drama. A four-person set piece, it tracks the fire and ashes of a love triangle between a woman, her husband, and his lifelong friend. Set to classical music, and featuring the passionate swells and the dark tragedy of great orchestration, Mélo and its characters take hold and don't let the viewer free until the final credits role. A fantastic mid-80s effort from accomplished French director Alain Resnais, it continues his unflinching examination of illicit romance while also exerting a tremendous control over the motion picture medium. 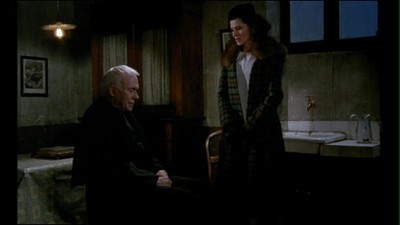