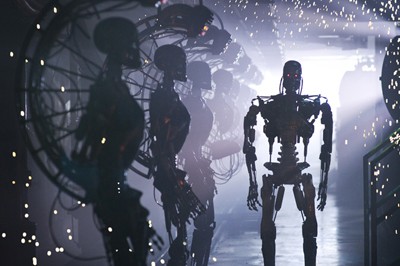 Word of advice to future resistance fighters out there: don't get in a helicopter with John Connor. Seriously, the dude is bad luck. Only one of you is going to walk away from that trip, and it won't be you.

And given that's the main thought that sticks in my head after watching Terminator Salvation, it should tell you something about what a letdown this fourth entry in the series turned out to be. Whereas its predecessor was merely a mild amusement, a feeble effort to turn a sci-fi action classic into light cable television fare, this fourth one comes crashing down like the proverbial mechanical flotsam and jetsam that repeatedly slams to the earth in its overlong 130 minutes.

Unlike the previous Terminator films, or even the recently cancelled TV show, there is no going back in time to save the future here. Rather, director McG, the fellow who was at the helm of the Charlie's Angels movies, and writers Michael Ferris and John D. Brancato, the men who wrote Catwoman, take us to the future to see what all the fuss is about circa 2018. There, the grown-up John Connor (Christian Bale) is trying to convince the world that he is the key to their surviving the war with the machines. He knows it, we know it, but the rest of his fictional world hasn't seen the prior entries and some of them are still skeptical.

The key to stopping Skynet and their army of killer robots once and for all is an audio signal that disrupts their Ethernet or interweb or whatever links them all together and shuts them down. The plan is to fire up the freedom fighting boom boxes and drop a mega-ton of bombs on the central computer while the global regulator is offline. Easy peasy, at least until a cyborg whose been on ice for fifteen years emerges from the mud to throw a monkey wrench in the ending of the war. Marcus Wright (Sam Worthington) was a death row prisoner who submitted his body to experimental science as penance when the state of California stuck a needle in him back in 2003. Newly awakened in a shiny metal body, he discovers the world has been destroyed, and the only two people left in L.A. are John Connor's future dad from the past, Kyle Reese (here played by Anton Yelchin, much better served as Chekhov in Star Trek) and a scared little girl named Newt...I mean, Star (Jadagrace). Sorry, McG switched his James Cameron thievery midstream.

And that's all you probably need to know about the story. It is what it is, for better or worse (though mostly worse). As set-ups for sci-fi action films go, Terminator Salvation could have started on much shakier ground, and at least for the first hour or so, it could have been mangled far worse than what McG manages. I was kind of with it for the first couple of acts, though oddly bored by it. There wasn't much story to worry about, and there are no complex characters to speak of (what is Bryce Dallas Howard even doing in this movie?), so really, there was nothing in the way of McG's making some kick-ass action sequences. Except, I guess, skill. Because I hate to say it (well, no, I don't), but the huge, explosive battles between man and machine are really dull. McG wants Salvation to look like an on-the-ground war movie, like some sort "What if the Transformers fought in Vietnam?" with a little Cloverfield jiggle cam thrown in, but he doesn't seem to know where the action really is. If this were a documentary, he'd have his camera in all the wrong places all the time. He'd be the guy filming a little girl eating ice cream while JFK gets shot behind him.

Sadly, this leaves viewers nothing to hang their hopes on. While I kept praying Terminator Salvation would get better, the lackluster action made it so there was nothing to distract me from the accumulating inconsistencies and ever-widening plot holes. This leads to a big climax that is so bad, so increasingly ridiculous, that it actually caused me to lower my grade of the movie by one whole ranking. Start with the fact that John Connor frees a bunch of prisoners and tells them to run for to the transport ship but seemingly has totally forgotten that he came alone on a motorcycle and there is no transport ship, and go from there. Ooops.

When it comes down to it, I don't feel that I out and out hated Terminator Salvation. It doesn't really make me angry so much as it makes me want to shake my head and say, "What happened?" At the same time, it's hard to pull up anything that really recommends it. Christian Bale is wasted, the inside jokes are lame, and though most of the special effects are pretty good, there is nothing innovative about them. I did like some of the designs on the machine ships and how the pieces all fit together, but that just means McG watched all the right giant robot anime. I guess when it comes down to it, you'll easily find worse movies this summer, and you'll also find better, but it's going to be tough to find one that's more middle of the road. Terminator Salvation isn't so much a movie, more like an object lesson in disappointment. 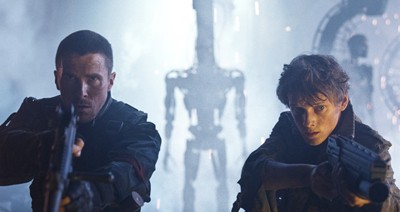