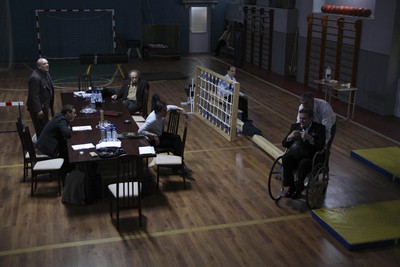 Classics are usually classic for a reason, and if you're going to mess around with proven material, it's my belief you'd better have a damn good rationale. Given the mixed results that veteran Russian filmmaker Nikita Mikhalkov (Burnt by the Sun) achieves in 12, I am sure the debate over whether his updating of 12 Angry Men was successful or not is likely to be as lively as the jury room murder deliberations depicted in the original Reginald Rose/Sidney Lumet production. Not to be too cute about it, but my verdict is marginally negative.

The basic set-up is this: twelve men have sat in a courtroom for three days listening to testimony in regards to a murder of a Russian veteran by his adopted son, a Chechen orphan. Sequestered in a school gym in a building adjacent to the courthouse, the men sit down for what they mainly assume will be a quick deliberation. Their jury foreman, fittingly played by Mikhalkov himself, is ready to move right to a vote, something the group is more than ready for. The wrinkle comes when one man (Segey Makovetsky), an engineer, refuses to vote "guilty" without some further discussion, feeling a human life is worth talking over and that nothing can be taken as a given. This puts him at immediate odds with a racist taxi driver (Sergey Garmash), a Moscow native who doesn't think a Chechen deserves any added effort. The engineer's argument is enough to foster doubt, however, and once another juror, an elderly Jewish man (Valentin Gaft), switches his vote, the conversation is underway.

All of the men here are basically types. They are largely unnamed, defined instead by their jobs and personalities. Thus, some authority is given to the Harvard-educated television executive (Yuri Stoyanov) and the surgeon (Sergey Gazarov), and the comedian (Mikhail Efremov) is meant to be the comic relief. At the same time, as the men argue about the murder, they also reveal things about themselves, their own tragedies, triumphs, and prejudices, and in this, even the jester can prove to have insight.

Problem is, Mikhalkov leaves enough room for reasonable doubt in how much we choose to believe in these characters. Having representative types is one thing when the writing is good, but 12 often uses these stock characters in cheap and obvious ways. Mikhalkov is aided in scripting duties by Vladimir Moiseyenko and Aleksandr Novototsky, the duo behind The Return, and some of their choices defy credible logic. A mentally challenged train car attendant (Alexey Petrenko) can barely form a coherent sentence within his rambling stories, and it's hard to believe a guy with his problems was ever allowed on a jury in the first place. His verbal difficulties also render the stuttering man in the jury box redundant. Elsewhere, the surgeon's over-the-top reaction to a syringe found in one of the school children's lockers arrives much like the way microphone feedback rather obviously announces a rock band taking a concert stage, with the sudden burst of visual violence Mikhalkov indulges in having the same jarring effect. It knocks the viewer right out of the experience. And it's the first of many such outbursts from a director who apparently has impulse control issues.

That said, much of the basic discussion in regards to the case is still fairly compelling, and had Mikhalkov put his faith in that and let the story stay in the jury room, 12 would be a much better movie. Unfortunately, the director decides that a back story on the accused (Apit Magamaev) is needed, and so we get cutaways to him in his cell, to flashbacks to his rough childhood growing up in the war, and even some baffling dream sequences. While this may sound okay on paper, what it does is take the duty of persuasion out of the hands of the jurors. With every flashback, we can feel Mikhalkov pulling on our sympathies. He is manipulating us rather than letting his characters prove their case. Add to this the complicated politics and ethnic prejudices that lay behind this new version of the story, and audiences are likely to feel more confused than convinced. 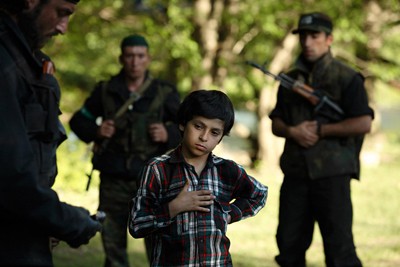 It's hard to know whether to blame the actors for the way the movie falters, because how does one discern what is the fault of the material and the lack of a guiding hand and what is the fault of the performers themselves? The ensemble of older actors may be very good in other circumstances, they are not faces that are familiar to me. In animated moments, they act so demonstratively Russian, they almost look like they are copying their mannerisms from a Mike Myers sketch ("If it's not Russian, it's crap!'). In their confessional moments, however, they come off like summer stock actors who have been waiting for their big monologue. This swings the exaggeration pendulum to both sides of the thespian scale, and it grows tedious as one by one they take center stage.

Okay, I get it. The larger tapestry here is that everyone is connected, we are all part of the process. In this way, each man has a story from his life that explains or illuminates a certain aspect of the case, whether it be the funeral director's knowledge of cons or the cabby's lessons as a father. It's like the Slumdog Millionaire of courtroom dramas: had these things not happened to these specific people, and had they not been the ones chosen to sit in the jury box, then the outcome of this trial could never be possible. But after two-and-a-half hours of this nonsense, it's a little difficult to buy, especially when Mikhalkov's character has a ridiculous proposal for the rest of the crew. You have to wonder if he sounded this crazy when pitching the project, and if so, why anyone ever signed on to 12. If you hadn't had enough by then, however, don't worry, because there are at least three more endings on the way, including some business with the engineer and a sparrow that will make all the Benjamin Button hummingbird haters apologize for not being on board with Fincher's avian metaphor--if they make it long enough through 12 to even get there.

Go and rent the 1957 Sydney Lumet 12 Angry Men with Henry Fonda. It's simplicity itself. Don't get it twisted, it's not that I think a remake shouldn't have some free rein or that the original is sacrosanct and can never be touched, but it really does shed some light on why Nikita Mikhalkov's version doesn't work. It's the fundamentals. Lumet doesn't use any tricks or flashy gimmicks, and Reginald Rose's script sticks to the case. All the drama is right there, it doesn't need the addition of twelve sob stories or gory war scenes. It also doesn't need to define the truth or provide a neat and clean ending. It's about the process, about the humanity that's in the details, and it's why we're watching it fifty years later, will watch it in another fifty, and why no one will even remember Mikhalkov's 12 five months from now.