Girl on a Motorcycle 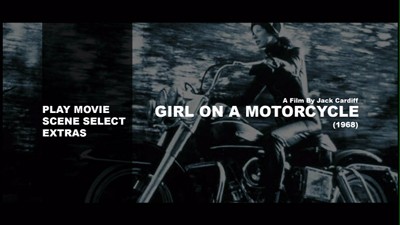 "Love is a feeling."

"So is a toothache."

So is watching this movie! Not love, but a toothache. Long, agonizing, painful. The cover declares that Jack Cardiff's 1968 wankfest Girl on a Motorcycle is a "A film that encapsulates the sixties." You mean it's a bunch of nonsense and self-indulgence followed by a cop-out ending? Hmmmm...probably not what you meant, but it'll do.

Words are really wasted describing this snoozer, but I'll give it a go anyway. '60s chanteuse Marianne Faithfull stars as Rebecca, a bookseller's daughter who is one night liberated by a sneaky professor named Daniel (Alain Delon). Moments after she rejects her fiancé's pre-marital advances, Daniel climbs in her window and makes mad, passionate love to her. As if that weren't enough, for her wedding present, he gives Rebecca a Harley and teaches her how to ride it. He is her liberator, whereas her future husband, the meek and bookish Raymond (Roger Mutton), is stifling. His idea of her being free is never putting his foot down, always saying, "Whatever you want, dear," whereas Daniel is cruel, disinterested, and selfish--in other words, manly. He is a professor who teaches grown-ups and so he does grown-up things; Raymond is a school teacher, working with children, and a child himself.

All these thoughts, all the details of her affairs, run through Rebecca's mind as she rides her motorcycle from Switzerland to Germany for the last time, determined once and for all to leave Raymond and give herself to her macho, macho man. Spurred on by a laughable psychedelic dream, she zipped her naked body into a leather jumpsuit. Once it's unzipped, look out world! Rebecca's going to make it after all! 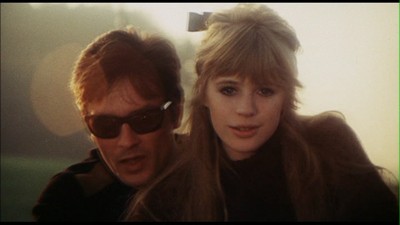 I have no idea if Jack Cardiff and crew really had it in mind that they would create a liberated portrait of the sexual revolution, but one look at the groovy theatrical trailer for Girl on a Motorcycle should make it pretty clear where they ended up. Marketed as exploitative trash, full of sex and co-opting the counter culture (such as it was), whoever put the campaign together really understood what they had to work with. Though Cardiff is a legendary cinematographer, he was really out of his depth with this movie. The journey on the open highway is hard to take seriously when half the time it's shot with blatantly awful rear projection and in most of the other half it's obvious the actors are being towed. The trippy scenes are silly, and the sexual innuendo even more so. It doesn't take a diabolical sex fiend to figure out what we're supposed to get out of seeing Marianne Faithfull straddle the front wheel of her bike. (Personally, I prefer the shots of her leather-clad derriere bouncing on the seat.) What about when that man sticks his gas nozzle in her tank? When is a cigar not a cigar, Mr. Freud? When it's anything in Girl on a Motorcycle!

For fans of Ms. Faithfull, it's hard not to be curious, seeing her so young and, well, shall we say full of life? She is definitely an alluring woman, and this movie was obviously designed to exploit that. Jack Cardiff's photography skills really pay off when it comes to long, lingering shots on her face. I have some doubts of how much we're really seeing her naked, though, since a lot of the more exposed shots are framed so we don't really see her face. In terms of acting, I suppose she pulls off a decent job. There isn't really all that much for her to do. Most of the movie is just long scenes of her riding her motorcycle, accompanied by trite voiceover (which apparently took a third writer to come up with). On the male side of things, Mutton barely distinguishes himself, and Delon pretty much sleepwalks through the picture. He probably knew what most people would be looking at and smartly decided not to waste the effort.

Cap all of this palaver with a perplexing ending, and Girl on a Motorcycle is a whole lot of nothing. Is this really a parable of female empowerment? A woman must choose between boredom and passion, between milquetoast and bitter whiskey? Or are we to assume that it's not up to her at all, and the big finale is the brazen hussy being neutralized. It's not possible Jack Cardiff had a psychic flashforward to the comedown that was just around the corner, the disappointing end of the decade...is it? He does beat the similar ending of Easy Rider by a year. At least the aimlessness of Dennis Hopper's film was kind of the point, though; here it's the unfortunate side effect. 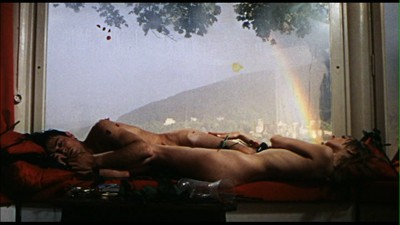 Video:
The 1.66:1 anamorphic transfer of Girl on a Motorcycle is wretchedly spotty, with faded colors, hazy blacks, and lots of dirt and scratches. One can only assume that the manufacturers had a single source material and they ported that directly to disc without any clean-up. There is also a fair amount of interlacing, so not much to shout about here.

Sound:
The mono mix is okay. It's a little metallic at times, and the levels are all over the place. It goes from being really difficult to hear the voiceover to glaringly loud when someone is revving their engine or music is playing.

Extras:
There is the amusing original trailer for Girl on a Motorcycle, a stills gallery, and four trailers for other DVDs from the company that put out this one.

FINAL THOUGHTS:
Skip It. Seriously, to call this film a wreck just to get some cutesy wordplay out of the title would be giving Girl on a Motorcycle more credit than it deserves. This clunker has hardly anything going for it. The story is nonexistent, and its main selling point, its portrayal of sexual freedom, is tame and restrained. Yes, Marianne Faithfull is gorgeous, but if all you want to do is ogle images of her, you might just spend a little time with Google Image Search. It's free and will take a lot less time. 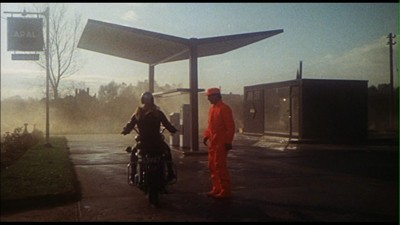