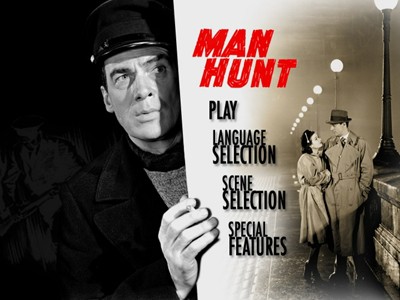 The 1941 film Man Hunt sounds like the kind of thing made just to give trivia buffs something to add to their repertoire. A Hollywood movie made before America entered World War II about a fictional personal skirmish between a British big game hunter (Walter Pidgeon) and Nazis set in a period just before England entered the fray, directed by Fritz Lang, a German ex-patriot. Does that about sum it up?

Based on Rogue Male, a piece of otherwise forgotten serialized fiction by Geoffrey Household (screenwriter Dudley Nichols has a much more distinguished resume, having won the Oscar for John Ford's The Informer), Man Hunt is a fun, captivating adventure yarn, even if it has some serious propaganda. A variation on the "most dangerous game is man" concept, the story opens with a tense, silent sequence where Pidgeon's hunter, Capt. Alan Thorndike, sneaks onto Hitler's compound and lines the Fuhrer up in his sites. At first he appears to plan on leaving without taking the shot, but changes his mind, loading a bullet into his rifle. Before he can fire, a guard happens upon him, clobbers him, and takes him to his SS boss, the drolly sinister Major Quive-Smith (George Sanders). Smith recognizes Thorndike, fancying himself a hunter to rival the internationally famous sportsman. They fundamentally differ on the idea of a "sporting stalk," however; Thorndike has long since decided that the killing is redundant, the challenge is getting close to the target. For Smith, this is nothing but weak-willed non-Aryan hypocrisy. There is no sport, just win or lose, kill or be killed.

Thorndike is in quite a predicament. He can either suffer torture and eventual execution at the hands of the SS, or he can sign a false confession that claims the British government sent him to put a bullet in Adolph. Thorndike refuses, insisting he will stand up to Nazi bullying for all of those who have so far been unable to. It's a battle of wills, Axis arrogance vs. Allied assurance. When the fake suicide the German Major sets up for the English Captain fails, a cross-continent search begins. Thorndike stows away on a British freighter, where he meets a resourceful young crew member (little Roddy McDowal), and then Quive-Smith and a crew of assassins pursues him back to England. There, Thorndike hooks up with crafty Cockney gal Jerry Stokes (Scarlet Street's Joan Bennett), a stubborn, stalwart lass from the wrong side of the tracks. It's love and terror on the backstreets of London as the manly hunter tries to stay one step ahead of an international incident!

In some ways, Man Hunt is a by-the-numbers chase picture, not altogether different than some early Hitchcock pieces like Sabotage and Young and Innocent. The overall movie is a series of tense sequences interspersed between quieter character moments. If one were to start dissecting Man Hunt in terms of story logic, it's not without its problems--namely, Thorndike returns to Jerry's apartment far too often and takes far too long making sure the girl is happy, making him pretty easy to catch were one to try. Still, when the chase speeds up, such as the deadly fight down in the subway and the ingenious stand-off between the two rivals at the climax, the film really crackles with energy. Thankfully, the slow parts are pretty good, too. Bennett overdoes her Dickensian urchin routine at times (she is a girl from Jersey, after all), but Pidgeon treats her sweetly and manages to give their side story some genuine tenderness. It's not forced romance, but a gradual coming together, the macho man being swift to action in the wild, but slow on the take when it comes to the dames.

It's Fritz Lang's mis-en-scene that should really get top billing on Man Hunt, however, not Walter Pidgeon. His technique is awe-inspiring in its sophistication. Subtle camera moves in the early verbal stand-off between Quive-Smith and Thorndike give it the electricity of a boxing match, while Lang's masterful use of shadows often made my jaw drop. Watch for a scene where George Sanders speaks to an unseen SS guard, and as the two men move in separate directions, the Major grows smaller in the background and the imposing shadow of the guard grows bigger in the foreground even though he is leaving the room. Lang has an incredible sense of composition. Man Hunt was shot at a 1.37:1 aspect ratio, and Lang and director of photography Arthur Miller use the square frame to their full advantage. This means some impressive long shots, such as Thorndike swimming in the water, approaching the chain for the anchor of the ship he'll stow away on. Other filmmakers would have gotten in closer, but Lang chooses to show the distance being traveled and the breadth of the murky expanse, and it adds to the off-kilter frenzy of the escape.

There is also an impressive commitment to the harsher aspects of the Man Hunt story. There are certain tough decisions that keep the film from going too Hollywood, including a gruesome fate for one of the main characters. Lang and Nichols, a writer with regular socially conscious proclivities, make no bones about their disdain for Nazi cruelty, and some tough words are exchanged between Thorndike and Quive-Smith that were pretty heated for an American production at a time when the country was trying not to antagonize the Germans and stay out of the War. This makes it all the more disappointing when the film totally blows it in the last couple of minutes. In order to catch the original story up to the times (Household released his book in 1939), Lang attaches a coda that shows the escalation of Nazi aggression in Europe to give an added oomph to the book's corny ending where Thorndike takes the situation into his own hands once again to make a go for Hitler and get his revenge. To call it "implausible" suggests that the contrived finish is in the realm of possibility at all. It takes the story from a believable pseudo parable about current events into something that stinks way more of propaganda than it probably should. Still, not the first or last time a movie falters at the finish line, and if you can grit your teeth and keep in mind when it should have ended, it doesn't ruin the rest of the race. 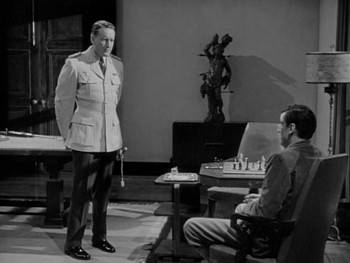 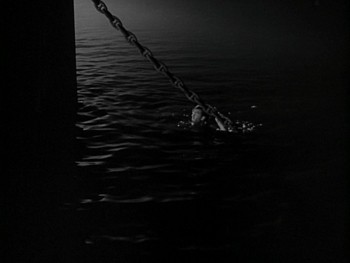 Video:
IMDB lists the aspect ratio of Man Hunt as 1.37:1, and if anything is lost in the framing of this DVD at 1.33:1, it appears negligible. As I noted above, Lang's use of the full frame is masterful, and the aesthetically pleasing look of the black-and-white picture is easy to appreciate on this lovingly restored disc. There is very little by way of print damage, just a couple of short scenes where the original materials must have been scratched a little too much to repair. Still, just tiny drops in an otherwise gorgeous visual ocean.

Sound:
Man Hunt is given two mixes of the original soundtrack, both a more traditional mono mix and a more technologically modern stereo mix. I didn't hear too much by way of mutli-speaker effects that might make purists chafe. The volume levels are very good, with nice oomph in the music.

Subtitles are available in French, English, and Spanish. 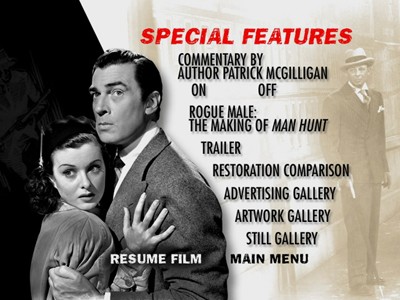 Extras:
Author Patrick McGilligan has recorded a detailed audio commentary for Man Hunt, giving background on the source material, the production, and its participants. His historical info is quite good, and his assessment of style is also well expressed.

McGilligan returns for the behind-the-scenes featurette, "Rogue Male: The Making of Man Hunt," where he joins other commentators like Steven Haberman, Paul M. Jensen, and Kim Newman to go over some of the same ground, but cover it in a more succinct fashion, focusing more on the origins of the story and the reverberations the movie caused, including censorship issues and violations of a non-aggression pact with Germany. There is also a short section on Lang's professional and personal relationship with Joan Bennett, which carried over into several other films. Clips and promo materials are added to keep the talking heads interesting.

Additionally, we get the original theatrical trailer, a short demonstration of the film's restoration, and galleries showing promo art, production art, and stills from the production. I wish there was a more substantial section of the production art, as the handful of drawn images, either from the concept and design stage or the storyboards, are fantastic, and we already saw the same ones in the "Making Of."

FINAL THOUGHTS:
Despite a goofy ending, Man Hunt is a fantastic suspense picture from Fritz Lang. Beginning in Germany and then crossing the oceans to England, it follows a single adventurer, played with charm by Walter Pidgeon, as he first hunts the most dangerous game he can imagine, Adolph Hitler, and then turns into a hunted fugitive himself. Full of some great tension, relieved by some equally good romance, it's a solid early propaganda picture that, for 99% of the movie, manages to be about the suspense rather than the message. Lang's use of shadows and the composition of his frames are remarkable to this day, so I can't even imagine how stunning it must have been to see this in 1941. Highly Recommended. 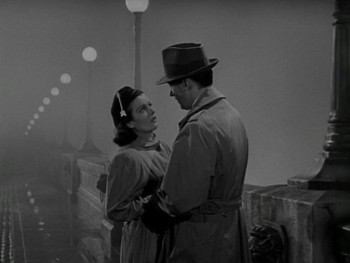 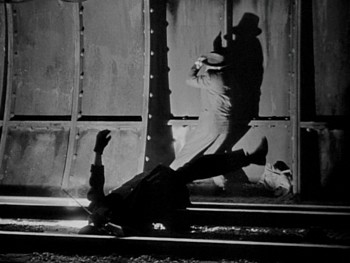