IT Crowd: The Complete Second Season, The 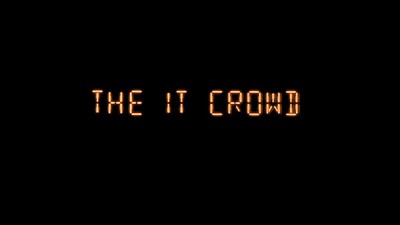 
The Story So Far...
Written and directed by Graham Lineham (Black Books) and produced by Ash Atalla (The Office), The IT Crowd is a British sitcom set at the help desk of a massive corporation (which oddly requires only a pair of analysts to service.) Roy (Chris O'Dowd) and Moss (Richard Ayoade) are socially-inept guys working in the basement peacefully and grudgingly helping the technologically inept, until a new boss is hired. Jen (Katherine Parkinson) knows nothing about computers, and the guys have no interest in being managed. Their shared misadventures in and out of the office were told in three six-episode seasons, which ran a few years back in England. The sets are finally getting released in America, with Season One released in March of 2009.

Oh yeah, it's got awesome opening titles with a killer theme song too.

The Show
The first season of The IT Crowd was a brilliant example of a workplace sitcom, with fantastically unique characters, a surreal sense of humor and perfect set-ups. Ayoade plays the most likable realistic geek ever on TV (move aside, Dwight Schrute) and O'Dowd manages to be both unlikeable and embraceable at the same time, while Parkinson's awkward manager does a nice job of making herding these nuts look like fun. I never really got into Linehan's big series, Father Ted and Black Books, but this series is all-over fantastic, blending workplace comedy with surreal wackiness. After all, you rarely see anyone in full skull-head face make-up at work on The Office. 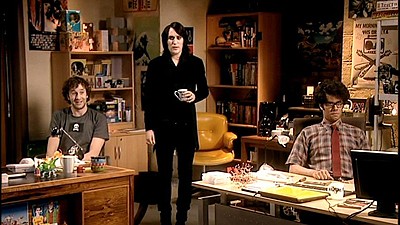 The second season is more of the same, which is a great thing, but with some important changes, including more of Richmond (Noel Fielding), the rarely-seen, goth third member of the IT staff. The biggest of the alterations comes in the second episode, when there's a change in management at Reynholm Industries (one of the best in TV history.) As fun as Denholm was as the head of the company, Matt Berry's performance as Denholm's long-missing son Douglas is outstanding, mixing mad bluster, sexual aggression and utter insanity with one of the finest voices in the business. The change in bosses affects the work dynamic, and gives Jen a bit more to cope with beyond her lack of computer knowledge. In all, it's a positive change, as Berry created what I like to call "the corporate royalty," someone immune to the realities of life thanks to their title at work.

Changes aren't just seen at Reynholm, as we get to see more of the crew's life outside of the office, including a night at the theater, a singles dinner at Jen's and a movie night gone wrong for Moss and Roy. In fact, when you compare the first two seasons, it hardly seems that the trio actually have jobs at times, as only one episode actually revolves around their work. Instead, we get stories about cannibalistic Germans and the perfect bra, or the wacked-out "Gay: The Musical." When you have a show that feels free to do things like turn a subplot about Jen smoking into a story of Soviet Communism (literally,) limiting the characters to their place of work would just seem unfair, especially since it would have robbed us of the chance to see Roy pretend to be disabled just to not get in trouble for using a handicap bathroom. While the more fantastical elements of the show, like a supermodel with her head wrapped in bandages, are the obvious attention getters, the writing is outstanding, with little lines here and there that just draw laughs where they might be otherwise hard to find.

On the commentaries (see The Extras), Linehan frequently references Seinfeld, and you can definitely see some similarity at the DNA level, but unlike that show, the IT crowd are all relatively enjoyable to spend time with. Sure, Jen is neurotic and dim, and Roy is a bit slimy and Moss is an ubernerd, but they aren't out to hurt people. They are just trying to get by in their station in life. In fact, aside from Jen, if Roy and Moss (and Richmond too) were left to their own devices, they'd while away their days surfing the net and playing Guitar Hero, content to simply exist. It's the outside world that's the problem, and they can't even figure out how to turn their computers on. 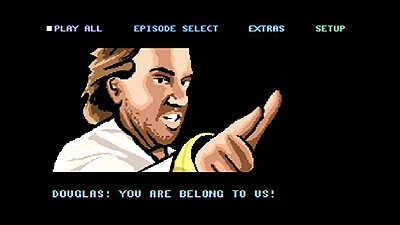 The DVD
A one-disc release, this six-episode set is packaged in a standard keepcase with a promo insert and a spot-UV coated slipcover. (I hope the quote on the cover from the Los Angeles Times is a joke based of the season's first episode.) The DVD features some of the best menus ever, which are based on video games, including a fantastic, poorly-translated 8-bit style opening animation and a Mortal Kombat episode selection menu. Options include play all, select episodes, extras and language set-up. There are no audio options, but subtitles are available in English (there's no closed captioning.)

The Quality
The episodes are presented in anamorphic widescreen, and look quite nice, with bright, vivid color and a decent level of detail. It's not going to be the greatest video you've ever seen, as it looks like a multi-camera sitcom shot on video on a stage, but there are no issues with excessive noise or digital artifacts, so there should be no real complaints about it.

The audio is delivered in Dolby Digital 2.0 tracks, which is fine for the series, as it's really all about the dialogue, which is presented in a center-balanced mix, without any kind of dynamic presentation. It's just not that kind of show.

The Extras
The big extra here is the commentary by creator Graham Linehan, as he provides an excellent track for each episode, with not a dead point in any of them. It's obvious that he has plenty to say in these commentaries, which makes them non-screen specific, though occasionally he'll make a comment about something going on on-screen, especially if it's something he regrets doing in the show. For the most part he'll talk about the experiences of making the show, influences on the episodes, and alternate ideas that weren't used in the series, breaking our great stories, like going to see Matt Lucas (Little Britain) in Taboo, which influenced the season's first episode. Thus, they are about perfect commentaries for fans of the series.

The first video extra is a seven-minute reel of outtakes, which shows the cast breaking up, as Ayoade makes O'Dowd laugh frequently, especially whenever Moss has to get excited or angry. One flub, by Fielding, is particularly amusing, as he tries so hard to not crack. The final extra is a seven-minute look at the making of the show, to be specific, the actual shooting of the episode, with narration from Atalla and producer Jamie Glazebrook. There's a lot of focus on the live audience at the taping, including interviews with them (and Linehan,) giving this piece a unique angle versus most similar featurettes.

I guess you could call it an extra, but under the set-up menu there's a 14-minute credit list for the cast and crew that rolls out as a lengthy computer-animated ticker. It's one of the odder ways this kind of info has been shared on DVD. 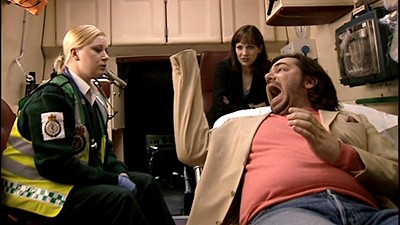 The Bottom Line
Watching these episodes makes me long to see the pilot of the long-since dismissed American remake, no matter how bad it possibly could be, just to see more of this series. It's just that good, thanks to classic writing and a brilliant cast. The DVDs look and sound very nice, and there are some enjoyable extras to enjoy, making it worth checking out even if you've seen all six episodes already.