Legend of the Bog 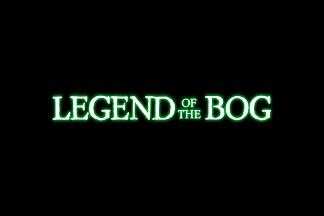 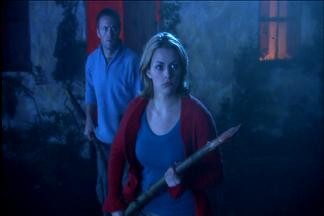 During my tenure as a reviewer for DVD Talk, I've praised distributor Lionsgate for giving home video releases of obscure or low budget horror films that likely would have not received any exposure at all otherwise. This is especially true of low budget fright flicks from other countries. Artifacts from Belgium would be a prime example. On the other hand, however, they've released a lot of foreign-made duds too; movies so bad you wonder how anyone at that company could have sat through the whole thing let alone decide it was worth marketing and distributing.

I guess you have to take the bad with the good.

Legend of the Bog, in any case, is a stinking example of the latter type of movie. When Lionsgate received this Irish horror film for a look-see in the mail, they should have just stamped "RETURN TO SENDER" on the package and replied with a kind no-thank-you. But they didn't, obviously. Instead, they slapped together a DVD cover with misleading art and information to trick horror fans into spending their free time on this mess.

Oof. This was a rough one to sit through in order to write a review. Can you tell from the tone of this writing?

The DVD cover centers upon the visage of Vinnie Jones, a cult actor who recently played the boogeyman in the far, far better Lionsgate title The Midnight Meat Train. Surrounding him on this cover are spears full of human skulls (which make no appearance in the movie) and a fog-covered, moon-lit bog environment a hundred times creepier than the Irish landscapes of the film. Vinnie Jones is in the movie, so the art gets that right, though after a brief introduction, he fails to show up on screen for the next half hour and should be considered a supporting actor at best.

Instead, the movie follows three annoying pairs of characters - none of them played by actors who put effort into their work here - as they all become stranded in the middle of nowhere because of car trouble. A real estate developer and her taxi driver get stuck in the mud. Two young women (I think they may be cousins) run out of gas. And, a professor obsessed with bog bodies (convenient for the film) and his former lover plow into a cow in the middle of the road. [As a side note, this last character, Saiorse, is played by Nora-Jane Noone, who a few years ago appeared in one of the best horror films I've seen this decade: The Descent. It's amazing to see her film career's descent since that time.] Instead of sticking to the roads for help, they all gang up at Vinnie Jones's shack (Jones plays a solitary hunter named Mr. Hunter - clever), where they have dinner and snipe verbal jabs at one another.

And what, you may ask, is the terror here? Well, after a lecture about bog bodies thousands of years old at the start of the film, one would suspect zombies. But no. Instead, one bog body, through bad CGI, morphs into a bald, growling guy (Adam Fogerty). Yep, that's the terror here, a literal 21st Century updating of Tor Johnson from the old Ed Wood disasters of the 1950's.

Folks, it just gets worse from there.

It's extremely rare for me to not finish a movie I started. I can't say that Brendan Foley's Legend of the Bog is a movie I would have stopped if I just happened upon it one day. It's not that horrible. Though, if I didn't have to review it, I may have been tempted to press the fast forward button a few times. A terrible premise. Bad acting. Long stretches of banal dialogue. These are what await wanderers into Legend of the Bog. Just skip it. 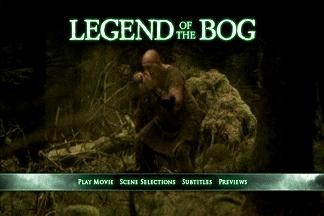 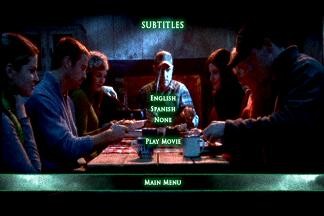 Lionsgate provides Legend of the Bog an anamorphic widescreen presentation in a 1.78:1 aspect ratio. Colors seemed muted and details lacking. Frustratingly, these qualities affected the presentation of what should have been beautiful establishing shots of Irish landscapes.

The lone audio track is an English language Dolby Digital 5.1 affair. This may be the only criterion of the review where I can honestly give some positive comments. The movie sounds fairly well-mixed, which is good news for American viewers unaccustomed to Irish accents. Optional subtitles in English and Spanish are available.

An ad for Break.com and trailers for Know Thy Enemy, Harder They Fall, Never Surrender, and Octane precede the main menu. They're available collectively under an Also From Lionsgate link in a Previews sub-menu, along with the trailer for Legend of the Bog itself.

And that is it for extras.

Lionsgate has released some foreign-made horror film gems on home video over the years. Legend of the Bog, imported from Ireland, is not one of them. Don't sink your time on this one - just skip it.