Highly entertaining on an almost visceral level yet paradoxically also shamelessly manipulative, frequently illogical, and at its core arguably dangerous neoconservative paranoia claptrap, 24 has been the anchor of the Fox Television Network since its debut eight weeks after 9/11, on November 6, 2001. The six-disc set of 24 - Season 7, with former intelligence agent Jack Bauer (Kiefer Sutherland) hot on the trail of African terrorists (and American co-conspirators) threatening American lives, offers an excellent Blu-ray presentation of a season that ended its run only weeks ago, on May 18, 2009. The season has the same qualities and problems as the very first one - and even some nearly identical plot points. It's an easy target for scorn and yet it's also hard not to get hooked, even if afterwards you feel like you've wasted a significant portion of your life watching it. 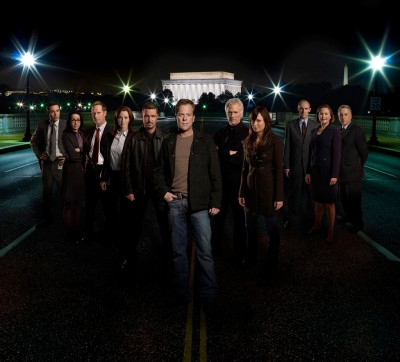 Some personal perspective is in order: Up to now the only season of 24 I watched all the way through was the first one, on DVD about five years ago. In Japan where I live, 24 became a national obsession for quite a while (until audiences moved on to Lost), to the extent that video rental shops still devote an entire aisle to 24's various seasons. I thought the first 12 or so episodes were flat-out terrific.

For the uninitiated, 24 is a "ticking time bomb" show told more or less in real time: a 24-hour storyline told in 24 one-hour (actually 41-42-minute) episodes. Like the 12-15 chapter movie serials that were popular until the advent of television, episodes of 24 feature shocking cliffhanger endings that keep viewers coming back again-and-again, the same labyrinthine escape-recapture structure and, like the majority of chapter-plays, traitors and moles operating at the highest levels of government and big business.

As much as I enjoyed the first half of 24's first season, the seams began to show as it went along; it became obvious the writers hadn't worked out all 24 episodes in advance, nor were they able to sustain it in terms of keeping the story logical and believable, though it remained compelling until the end.

However, I hated hated HATED the final scenes of the last show. (Very old spoilers) Essentially, in the very last seconds they killed off Bauer's wife, a character he'd been trying to rescue and protect for the run of the season, and in a surprise twist her killer turned out to be Bauer's closest ally, in fact one of the terrorists of the story. Though not adverse to tragic endings - On Her Majesty's Secret Service (1969) has a similarly downbeat one, and it's a great film - I came away feeling needlessly cheated, the rug pulled from under me (along with everyone else) for a cheap shock ending that, in retrospect, insulted the audience's intelligence because it made absolutely no sense at all. It was a revelation totally at odds with virtually all that character's actions in the preceding shows.

Mainly for this reason I steered clear of 24 after that, especially after reading Jane Meyer's acclaimed February 2007 article about the show in The New Yorker, in which series co-creator Joel Surnow and others confessed to cashing in on post-9/11 fears of another massive terorist attack. In the piece, Surnow admitted 24's stories were "ripped out of the Zeitgeist of what people's fears are - their paranoia that we're going to be attacked" and insisting that "America wants the war on terror fought by Jack Bauer. He's a patriot."

However, Surnow's patriot famously has no qualms about violating federal and international human rights laws, unhesitatingly torturing suspects to obtain information. In that sense 24 became a neocon fantasy completely at odds with reality: Baurer never tortures innocent people - they're always guilty as hell, typically repugnant mass murderers, and often Muslims and/or non-whites. (When the terrorists are white, nine times out of ten they're motivated by simple greed.) Bauer obtains completely accurate, vitally-needed information from the people he tortures, information needed to save thousands of American lives under an imminent, catastrophic threat.

Ironically, Season 7 of 24 is almost gleefully defiant against such criticism. Those critical of Bauer's techniques are moderate and liberal wusses who just don't get it. In fairness, I need to point out that, due to tight deadlines here at DVD Talk and with Fox, I was only able to watch the first nine episodes of Season 7 but, so far, a major story thread has Bauer teamed up with a by-the-book FBI agent, Renee Walker (Annie Wersching), whose own anti-torture views are tested - and quickly thrown to the winds - under Bauer's influence. In practice, so the show would have it, you'd have to be a fool not to torture the bad guys, for the ends always justify the means - even when in one show Walker almost seems to enjoy the high (or whatever) while psychologically traumatizing a young mother - the unwitting wife of one of the terrorists - by pretending to torture the woman's baby.

Bauer's personal preference for coercion over civil liberties permeates every episode, to the extent that after a while the torturing itself becomes routine, banal, and Bauer himself - and even neophyte Taylor - have little difficulty shaking off the psychological consequences of their actions, staying focused on the task at hand.

And yet 24 is slick and effective, very well made from a production standpoint it not actually very good. It relies on innately involving scenes of peril and a kind of rubbernecking appeal rather than clever plotting or writing that actually explores post-9/11 issues with any real depth. Season 7, for instance, involves military action by the President Allison Taylor (Cherry Jones), a Hillary Clinton look-alike, against an African military regime engaged in genocide. (Tastelessly, Fox News footage of real atrocities is shown.) However, the country in question is pure fiction - with the authentic-sounding name of Sangala - and its politics are as simplified as those in the average Tarzan movie: the thoughtful-looking "freedom fighters" desiring democracy are over here, the brutal, (darker-skinned) freedom-haters who like to barbeque small infants on a spit are over there.

Nevertheless, there's enough slick suspense and intrigue to keep viewers glued to their seats, and hooks to draw them back the following week. 24 is quite significant in terms of the way people all over the world now watch television programs. It seems to have been the first show many viewers "gorged" on, buying or renting an entire season and watching it in one fell swoop, usually over several days, rather than over the course of a full season lasting many months.

As with Season 1 eventually I found myself wearying of the mechanical manipulation of the show, especially its heavy reliance on technology that seems capable of anything; I suspect computer whiz Chloe O'Brian (appealingly played by Mary Lynn Rajskub) could from FBI Headquarters in Washington remotely flush a toilet at the 7-11 in Lompoc, California. There are too many scenes of characters racing around on foot or in cars conferring with people at computer terminals trying to help/stop them, and too much repetition of ideas.

I was surprised, for instance, that in an early episode one of the show's villains orders an undercover Bauer to murder Agent Walker, to shoot her in cold blood. He does, but only wounds her, convincingly faking her death. The very same thing happened in a first season show with a similar character. As amused TV historian Stephen Bowie told me while I was preparing this review, "it always cracks me up how various critics and bloggers go on about how a given season is strong or disappointing...when they're all exactly the same." With admittedly only seasons one and seven to go by, based on the evidence I tend to agree.

Though on older players 24 - Season 7 seems to take forever to load, the 1080p 50GB/1.78:1 presentation is a knockout, up to contemporary high-concept television standards. (The high-def image does have one disadvantage, however. Though set in Washington, D.C., it's easy to spot the Los Angeles locations used for the lion's share of exteriors.) The 5.1 DTS-HD audio is similarly spectacular, at a level comparable with expensive feature productions. SDH English subtitles are included, along with French and Spanish subtitles, but no alternate audio options. The 1050-minute season is spread over six discs. The box does not include a text booklet or episode guide, which is unfortunate, and the packaging itself is rather clumsy; once opened the snap-case isn't easy to close again.

Also included are the usual value-added featurettes, all in high-definition: The Music of 24 (13 minutes), The Ambush (13 minutes, with behind-the-scenes details on the 19th episode), 26 minutes worth of Deleted Scenes, and The Untold Story, a 16-minute overview focusing on how a WGA (Writers Guild of America) strike impacted the show's production.

I confess a fondness for pork rinds, fried pork skin - essentially, deep-fried fat. I only eat pork rinds about once every seven or eight years, because as anyone who eats pork rinds will tell you, if you eat too many of them too quickly, you'll likely trigger a massive heart attack. 24 is the TV equivalent of pork rinds. It's a tasty, guilty pleasure but not exactly good for one's health and easy to overdose on, and one needs to be keenly aware of the risks while consuming it. But there's no denying the taste. As a guilty pleasure, 24 - Season 7 is Recommended.