Street Fighter: The Legend of Chun Li [Unleashed and Unrated] 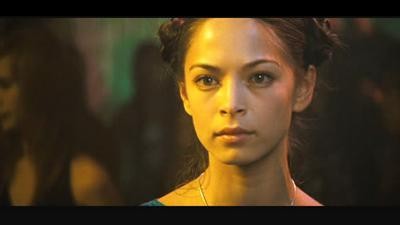 Street Fighter: The Legend of Chun-Li is one of those times when I'm terribly torn. As a movie critic, I probably have the responsibility of telling you that this is a nonsensical, badly-acted mangling of the popular video game. As someone who enjoys bad movies, however, I also want to tell you how funny this movie is. It's just the right level of serious-but-not-too-serious that's critical for a great turkey. The last adaptation of Street Fighter for the big screen took things a little too literally, and this one backs off a great deal, but the whole thing -- kung fu training, secret organizations, summoning balls of energy to blast opponents -- still looks incredibly silly in live-action.

First-time screenwriter Justin Marks has one small concept that works: instead of trying to squish the stories of all the Street Fighter characters into one movie, this time only Chun-Li's story is the focus, giving the film a clear hero and trimming the film of excess character and story. We first meet Chun-Li as a little girl, learning piano and kung fu from her father, Xiang (Edmund Chen). Unfortunately, Dad's been making poor friends, and although Xiang can perform martial arts with his hands on fire, he still ends up dragged away by a vengeful M. Bison (Neal McDonough). That's cool, though. Chun-Li is apparently uninterested until she grows up to be Kristin Kreuk, her mom dies, and a scroll shows up in the mail, at which point she abandons everything to go find out about her missing father.

She takes the scroll to someone who can read it, who tells her she needs to find Gen (Robin Shou), except that Gen will actually find her, when she's ready. 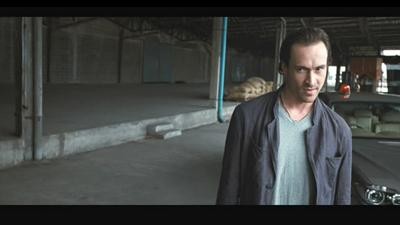 Based on this information, Chun-Li comes to the conclusion that she needs to ignore her wealth, live on the street, and become enraged by crime in the area, which somehow is exactly what Gen intended, and soon Chun-Li is training with him, learning to make yin-yangs in the sand and smack little metal balls Gen throws at her, just in case she encounters an opponent who throws marbles, I guess. He also shows her how to summon those balls of energy I was talking about, but as far as I can remember he does not yell "Hadouken!", which is a disappointment.

Elsewhere, M. Bison has decided to oust his slum-owning competition by killing them, which, as it turns out, is extremely effective. Thus enters the movie's best character. In fact, it may be the best character put on screen in the history of cinema. I would watch several movies about Chris Klein's Interpol agent Charlie Nash, who gets called in to assist local detective Maya Sunee (Moon Bloodgood) when the slum-owner's bodies are discovered. Klein's performance is phenomenal. First off, no offense to the guy, but Chris Klein is not exactly a great actor, but on top of his already flawed performance instincts, he acts like he's imitating Keanu Reeves for a "Saturday Night Live" sketch. Upon seeing that Maya is his partner on the Bison case, he growls under his breath "I love this job," and, in a later scene, turns away from her to dramatically stare off in the distance (towards the camera) and gravely intone about Bison's criminal history. It's ridiculously silly, it's out-of-place in every scene, and, most of all, It. Is. Amazing.

Soon, Chun-Li, Nash and Maya are all on Bison's tail (easy, because plot-relevant information is always the top news story on generic-looking websites), trying to stop him from recovering an important item known only as The White Rose, scheduled to be delivered at the local shipyard within days. You don't even know what the White Rose is!" yells Bison's bodyguard Balrog (Michael Clarke Duncan). "By the time you figure it out, she'll be long gone!" No, they won't, Balrog, unless you give them more hints. 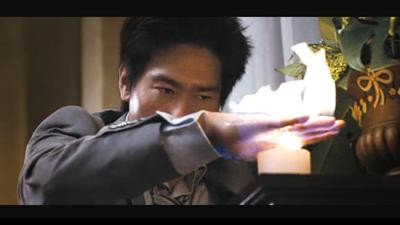 Slow-motion explosions, strange lesbian seduction scenes, people who were thought to be dead turning out to not be dead, and more scenes of Charlie Nash ("Nash out!") ensue, bringing the hilarity to a fever pitch as the movie races towards a franchise-friendly conclusion.

Is there anything to legitimately like about this movie? While I wouldn't exactly praise the fight sequences outright, I suppose they're relatively entertaining, but maybe I'm just amused how kung-fu movies are like the musicals of the action world: people break into martial arts instead of song. Fights take place in alleys (you can tell a group of guys are bad if they just stand around drinking beer, burping and laughing), in clubs (good use of stripper poles), and, invariably, on a rooftop with some seemingly useless bamboo structure, clearly constructed so there could be a fight scene on it. Chun-Li also fights Vega (Black Eyed Peas' member Taboo), one of the video game's characters, but he only really has the one scene, and he just seems like a) a poor imitation of Wolverine, with his giant metal claws, and b) stupid, with a mask that won't stay on.

The rest of the direction, by Doom's Andrzej Bartkowiak, is watchable and moves at a reasonable clip, and the movie isn't boring, but make no mistake, this is a disaster. Still, based solely on how entertained I was through the entire experience, I gotta give Street Fighter a wholehearted pass. I mean, I'm a guy who also loves Super Mario Bros., another game-based trainwreck with even more potent "What were they thinking?" moments than this one. Admittedly, it's the cinematic equivalent of rubbernecking, but if you're into that, or just want a movie to get drunk and give the "Mystery Science Theater 3000" treatment to with a bunch of friends, I don't think I can praise this movie enough. Nash out! 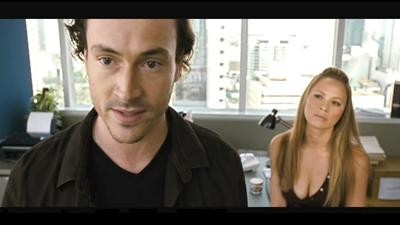 I can't say what's different, since I've only seen the one cut, but it's significantly violent, including headshots, broken necks, severed heads, and an appallingly dark scene in which Bison is using a woman's strung-up corpse as a bloody punching bag (implying that he tied her up while she was alive and proceeded to beat her to death). I wouldn't call it gory, but it is surprisingly graphic. I don't really know what to say about the scene, but overall, anyone who saw the movie in theaters and wished it had more violence should be pleased, I guess.

The DVD, Video and Audio
Fox only provided a screener disc, so I can't grade the packaging or the A/V specs. If they send me final copy, I'd be thrilled to update my review.

The Extras
Well, first of all, the film arrives on DVD in a 2-disc set. I only got one of the two discs in question. Usually this means I missed out on a useless digital copy, but checking out the specs online, it looks like I'm actually missing an animated comic book movie called Street Fighter: Round One -- Fight!. I really don't have any details on how long it is or whether it includes any bonus features of its own, but the image of the box art suggests it will only be included with the DVD for a limited time.

Street Fighter: The Legend of Chun-Li includes an audio commentary (Unrated version only) with producers Patrick Aiello and Ashok Armitraj and actors Neal McDonough and the one and only Chris Klein. Sadly, it's pretty low-key and everyone seems to be taking things pretty seriously, yet there's not really that much in-depth information provided by the participants (although, Armitraj helpfully promotes the game, as if people will somehow be hearing the commentary before the movie opens). If, for some reason, you're really interested in this movie, then I suppose the commentary's a reasonably good time-killer, but others can probably pass on it.

14 deleted scenes (15:28) are as funny as the movie itself. Most of them include some element that isn't completed (a photo of Nash's family, 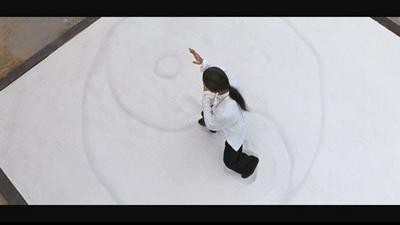 information on computer screens), which makes the actors' emotional investment in them seem even goofier than it does in the final film. You also get to see Gen slip in the obligatory "explanation" for the Street Fighter title, see what may be a terrible alternate ending, and who can say no to more of Klein's Charlie Nash? Not me!

"Becoming a Street Fighter" (17:49) is the main making-of featurette, which actually intersperses footage of the game with people talking about their reasoning for making the movie. This does not make their decision-making process look sound. "I have two kids, ten and seventeen, who love the game," explains one producer. "They said, 'Dad, you should make a movie out of this!'" Protip: Next time, don't listen to your kids. Everyone praises the movie, cast, and crew hyperbolically, which is amusing in its own right, and nobody mentions Van Damme's Street Fighter, either, although it's hinted at a few times. Next, "Chun-Li: Bringing the Legend to Life" (6:34) focuses on the character -- but only the movie version -- using the same participants. Too bad, a look at the video game character might have been nice. That said, this has more of the martial arts training footage than the previous featurette, so if you like that, look here. Or perhaps pop on "Fox Movie Channel Presents: Making a Scene" (9:27), which focuses on all of the movie's fight scenes as opposed to any specific one. Interestingly, Bartkowiak is not interviewed: he doesn't participate in the disc anywhere.

"Recreating the Game: Arcade to Film Comparisons" actually turns out to be a gallery with the game and movie characters placed side by side, and it's joined by "The Fight in Black and White: Storyboard Gallery" and Behind the Fight: Production Gallery". There's also a Marvel vs. Capcom 2: Sneak Peek (1:13) set to "The Touch" by Stan Bush, and a page marked "Trailers" that only includes spots for Miss March, a direct-to-video sequel to The Marine cleverly titled The Marine II, and the Sarah Michelle Gellar thriller Possession (I've seen this trailer on so many Fox DVDs -- isn't it out yet?). Automatic trailers for X-Men Origins: Wolverine, the equally funny-looking Dragonball: Evolution and John Cena's 12 Rounds play when you put in the DVD. No trailer for Street Fighter: The Legend of Chun-Li is included. 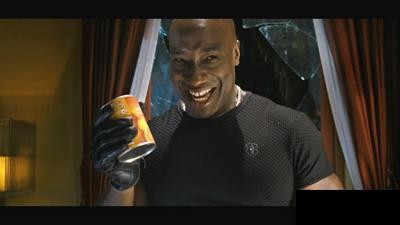 Conclusion
I should tell you to skip it, but I want to tell you I highly recommend watching the movie for pure bad-movie entertainment value. On top of that, the DVD is fairly packed, with two cuts, a commentary, multiple featurettes and more, not to mention an animated movie of some sort that I didn't get to see, as well as a batch of equally funny deleted scenes. In the interest of fairness, I'll lower my rating to recommended, but anyone who likes bad movies should be first in line.