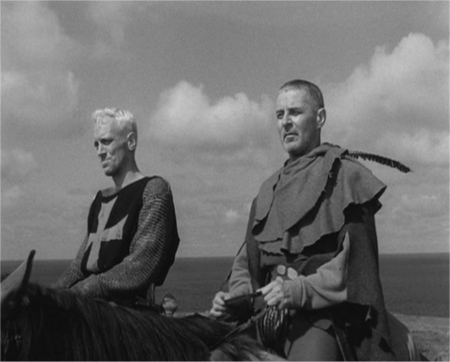 It's been over 50 years since the release of Ingmar Bergman's The Seventh Seal (Det sjunde inseglet, 1957), and it feels both older and younger than its release date would suggest. The film's timeless themes of morality and the search for religion---not to mention a brooding medieval landscape, of course---make The Seventh Seal feel like it could've been made within the last two decades, but its sterling reputation almost implies that it's been around forever. Sourced from a passage in Revelation and adapted from an earlier play by Bergman, this brisk tale wastes little time in getting right to the point: when our time comes, there's little we can do to stop it.

Antonius Block (Max von Sydow, less than 30 years old at the time of production) plays a knight during the Crusades, whose weathered face depicts a man roughly twice his age. Tired and beaten on a desolate beach, he and his squire Jöns (Gunnar Björnstrand) are unaware that Sweden has fallen victim to the Black Plague. Approached by Death (Bengt Ekerot), Antonius soon realizes that his time has come as well. Desperate to escape such a fate, the knight challenges Death to a high-stakes game of chess...and if Antonius wins, he'll also win his life back. If he loses, of course, he'll go without argument. Their game is played in several installments as our story progresses, allowing tension to build while we're introduced to other travellers.

Jof, Mia and Jonas Skat (Nils Poppe, Bibi Andersson and Erik Strandmark, respectively) are a trio of travelling actors. They're making their way across the countryside with Jof & Mia's son, earning a simple living by entertaining townsfolk during such dire times. They eventurally meet with Antonius and Jöns during a peaceful picnic, after which the knight invites the travellers to stay at his castle. With a blacksmith (Åke Fridell), his wife (Inga Gill) and a mute servant girl (Gunnel Lindblom) also in tow, the band of travellers returns to Antonius' castle where his wife (Bertil Anderberg) is waiting. The knight hasn't seen her in ten years, but Antonius has other things on his mind; specifically, Death, who's been following him as their game progresses. Before long, he comes knocking. 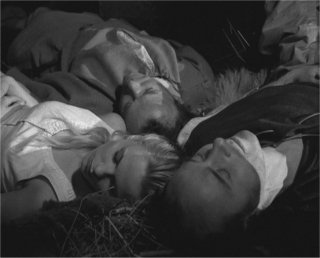 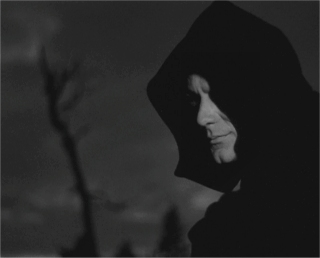 Antonius' religious quandries are undoubtedly the core of The Seventh Seal and his encounters with Death are the most arresting. Trickery is used on both sides to extend the game, but Antonius' reasons are purely noble: he's buying time to see his wife and, later, to allow the travelling actors to escape with their son. These encounters are so strong, unfortunately, that they render other portions of the movie almost unnecessary; for example, the inclusion of the blacksmith and his wife. While these characters---and their own personal issues, of course---broaden the scope of our travelling bunch, they're almost extraneous in every other sense. Though The Seventh Seal hardly overstays its welcome during its 96-minute lifespan, one can't help but wonder why the story tends to stray from such a strong center. Either way, Bergman's film remains as influential, thought-provoking and timeless as ever, more than 50 years after its original release.

Films had moved beyond black-and-white decades before The Seventh Seal came about, but it simply wouldn't look right in color. The grainy, oppresive cinematography is one of The Seventh Seal's hallmarks, creating an atmosphere appropriate for the Black Plague era. Criterion's new two-disc treatment, which is also available as a one-disc Blu-Ray release, reminds us of the film's fantastic visuals on a frame by frame basis. The technical presentation looks to be a modest improvement over Criterion's own 2001 release, but a new handful of bonus features might be the real selling point. Let's take a closer look, shall we?

Presented in its original 1.33:1 aspect ratio and slightly picture-boxed*, The Seventh Seal looks excellent from start to finish. The film's low budget and age aren't a factor in the least, as the crisp black-and-white cinematography appears as good as ever. Black levels are rock solid in all but the darkest of sequences, while image detail and contrast are also solid throughout. Though I don't have the older Criterion release for a direct comparison, it's doubtful that it could look this good.

* - Picture-boxing creates a small black area around the image to compensate for overscan used by most standard-definition TVs. This prevents the loss of image on all four edges, but those with more modern setups will suffer a slight loss of resolution. Click here to view an uncropped screen capture from the DVD.

The audio is less noticeable but also gets the job done, presented in its original Swedish 1.0 Mono mix (and also available in an English dub, which sounds much less robust). Dialogue and music rarely fight for attention and virtually no pops or hisses are present. Overall, it's a low-key but solid effort that fans should appreciate. Optional English subtitles are present during the main feature and some of the extras. 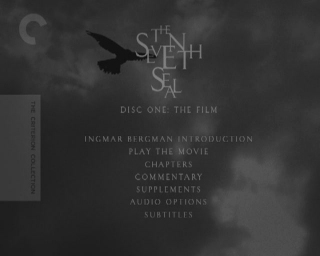 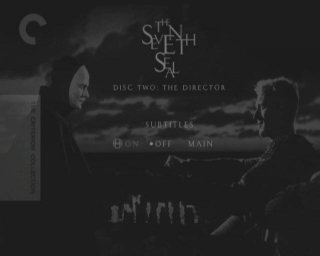 Seen above, the lightly animated menu designs are basic and easy to navigate. The 97-minute main feature has been divided into 15 chapters (16, if you count the color bars), while no obvious layer change was detected during playback. This two-disc release is housed in a clear keepcase with two hubs; also tucked inside is a handsome 24-page booklet with disc specs, photos and an essay by Gary Giddons.

Bonus Features
Spread out over both discs, this release offers a handful of new features that weren't included on the original Criterion DVD. Disc 1 leads off with an Introduction by Ingmar Bergman (2:57), recorded in 2003 for the film's broadcast on Swedish television. Also here is a feature-length Audio Commentary by film scholar Peter Cowie, originally recorded in 1987 for Criterion's laserdisc release. Topics discussed during this scene-specific session include the film's heavy use of symbolism, the strong production design (especially on such a small budget), Bergman's use of comedy and much more. As an update to this commentary, a newly recorded Afterword with Peter Cowie (10:34) has been included; more often than not, the scholar discusses The Seventh Seal's lasting influence.

Also included on this disc are a few minor but enjoyable supplements, such as excerpts from an Audio Interview with actor Max Von Sydow (4 clips, 19:50 total), recorded in 1988 and moderated by Cowie. We're also treated to a short piece entitled "Woody Allen on Bergman" (7:15, below left), a 1998 Turner Network production with Allen sharing his comments and praise for several of Bergman's most memorable films. Last but not least is the film's Theatrical Trailer (2:36), presented in rough but watchable condition. 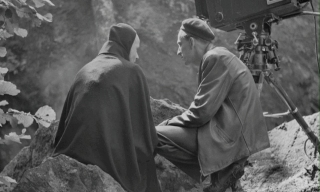 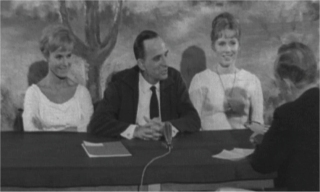 Disc 2 includes a pair of in-depth documentaries, but they're aimed more towards fans of Bergman's entire catalogue. "Bergman's Island" (83:22, above right) is the main attraction, a feature-length piece that discusses the director's life and accomplishments. Originally produced in 2004 and hosted by journalist Marie Nyrerod, topics of discussion include Bergman's childhood, his most memorable films, a strict religious upbringing, his experiences in theater and thoughts on death and mortality. Shot at Bergman's secluded residence on Faro Island (where he lived permanently from 2004 until his death in 2007), it's quite a revealing and sobering piece that fans should enjoy.

Also here is "Bergman 101" (35:21), a more focused overview of the director's career, narrated again by Cowie. In short, he takes us on a guided tour through Bergman's life by way of production stills, film clips and other visual aids, though his comments are the most revealing aspect of this piece. Those newer to the director's work are encouraged to watch this before Bergman Island, as it's presented in a more organized and accessible manner.

All bonus features are presented in anamorphic widescreen when applicable, except for the letterboxed Introduction on Disc 1. Optional English subtitles are included for translation purposes, which leaves out the commentary and several other extras. It's a shame that Criterion couldn't go all the way here, but at least they've made some effort in this department. Overall, this is a lengthy and satisfying collection of extras for Bergman fans of varying experience levels.

NOTE: Disc 2 is also available as a stand-alone release, entitled "Bergman's Island", at a lower price point. This two-disc set represents a better value, though owners of the previous release may choose to purchase it separately.

Potent and thought-provoking, Ingmar Bergman's The Seventh Seal returns to DVD in grand fashion. The film itself has held up quite well during the last 52 years, thanks to its universal premise and strong performances. Only a few extraneous subplots keep our story from being even more streamlined, but this relatively taut 96-minute drama is as affecting as ever. Criterion's two-disc treatment provides a solid technical presentation, but the added bonus features make this an easy choice for those who don't own it on DVD yet. The lower price point is another plus---and combined with the separately-released Bergman Island, provides two different options for owners of Criterion's 2001 disc. Simply put, The Seventh Seal is a top-tier release that belongs in most any DVD collection. Highly Recommended.