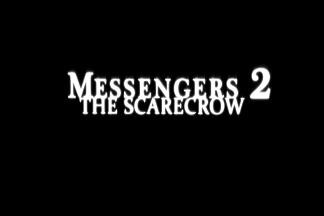 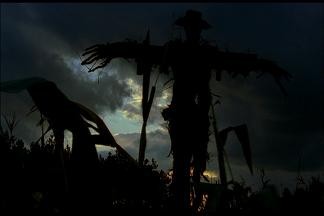 Messengers 2: The Scarecrow represents the latest in a long line of direct-to-video sequels / prequels / remakes to flood the home video market for horror movies that made at least a few cents at the box office. This one comes courtesy of Sony, who at least has a record of distributing some competent fright flick sequels straight to DVD, like this past January's Boogeyman 3. The blurb on the back cover art for this DVD claims Messengers 2: The Scarecrow is a "chilling prequel" to The Messengers, a 2007 theatrically-released ghost film starring a pre-Twilight Kristen Stewart. How closely this prequel fits in with the original is a little tough to judge, as it's been a couple years since I saw the first go-round. However, Messengers 2: The Scarecrow can be viewed without seeing the first film, I can report, as it stands solidly on its own as an independent story.

This prequel is helmed by some guys with experience, at least. The script, provided by Todd Farmer (who worked on Jason X and the recent My Bloody Valentine 3D remake), has a familiar plot with obvious development points signaled throughout, yet Farmer pulls through with a storyline that remains consistent and linear (and perhaps borrows liberally from The Shining and Children of the Corn). Its director, Martin Barnewitz, is apparently fresh off of last year's enjoyable Danish horror flick Room 205. Together, they've assembled a watchable albeit forgettable low budget horror film romp. The first Messengers was a teen-friendly PG-13 spook show, but its prequel is a harder R in an attempt to better assuage the horror crowd.

Messengers 2: The Scarecrow tells the story of poor John (Norman Reedus), a farmer struggling with a number of problems. His cornfield doesn't look healthy, crows are wreaking havoc everywhere in his fields, the bank wants to foreclose on his farm, no one will lend the guy more credit, his irrigation system doesn't work, and to add insult to injury, John's wife Mary (Heather Stephens) may be having an affair.

Things start to perk up, however, when John finds a sinister scarecrow hidden in his barn. John's son has some cryptic things to say about it, but John decides to put it up anyway. Soon after, things start to magically improve: the irrigation system works and the corn starts growing better. Unfortunately, as with a lot of stories involving supernaturally-tinged items, the benefits come with dire drawbacks. At first, it's dead crows littering the fields, but soon John's enemies wind up dead as well. As the body count starts to rise, John begins to have nightmarish visions and is drawn into the mystery of his odd neighbors, a May / December - style couple who also seem to be tinged with the supernatural.

And so it goes, with the film's central question lying with whether the titular scarecrow is somehow alive and malovent, or rather John is just going insane. And that's the problem with Messengers 2: The Scarecrow: this type of story has been done hundreds of times before and thus has a too-familiar feel to it. The movie is clearly low budget, sure, but it's pulled off ably enough by Barnewitz and Farmer. The acting is decent enough, overall. And while this prequel is definitely R-territory, its scares and kills are relatively tame compared to the ultra-explicit likes of Saw, etc. In other words, the hardcore horror-goers may be ambivalent towards the content of this movie.

I wasn't bored by the film, but I wasn't taken with it either. My suggestion would be this: if you're curious about a prequel story to The Messengers, then this 94-minute exercise is probably worth your time as a rental. If not, then this is definitely something to skip. Supernatural horror seems to be "back" in the theaters recently, and there are far better new fright flicks to catch than this. 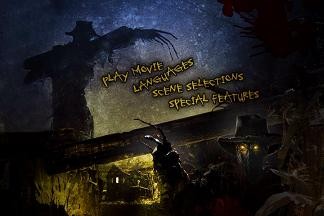 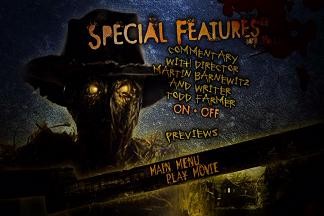 Sony gives Messengers 2: The Scarecrow an anamorphic widescreen presentation in a 1.85:1 aspect ratio. Colors seemed fine, with browns and greens dominating a number of scenes, not providing the richest of palettes. Video noise was present, especially during night-time scenes. But, in general, details were strong, and this movie looks pretty good.

Two language tracks are offered on this disc: English and French. Both are Dolby Digital 5.1, and the English track appears to be the default. I can't fault the mix here: dialogue is clear, and sound effects are presented fairly dynamically. Optional subtitles are also offered in English and French.

Trailers precede the main menu for Blood: The Last Vampire, The Grudge 3 (and by extension The Grudge and The Grudge 2), Boogeyman 3 (and by extension Boogeyman and Boogeyman 2), and The Stepfather. These are accessible via a Previews link in the menu system (except for, strangely, The Stepfather), along with ads for the blu-ray format and the fearnet.com website, and additional trailers for The Devil's Tomb, Angel of Death, Impact, Obsessed, 12, Blood and Chocolate, The Messengers, and 30 Days of Night.

More importantly, a commentary track from director Martin Barnewitz and writer Todd Farmer is provided. A random sampling suggests the two are cordial and friendly, and that their comments are continuous throughout the film.

Messengers 2: The Scarecrow is a competently made but thoroughly routine prequel to The Messengers. With supernatural-themed horror movies en vogue right now, there are far better new fright flicks to check out on home video. If you're a fan of The Messengers, however, then this low budget prequel is worth a rental.