Warner Bros. // PG-13 // July 7, 2009
List Price: $28.99 [Buy now and save at Amazon]
Review by Stuart Galbraith IV | posted July 10, 2009 | E-mail the Author
Though not as witty, literate, or ambitious as the movies Jack Lemmon and Walter Matthau made for Billy Wilder and others, Grumpy Old Men (1993) nevertheless proved a real crowd-pleaser. Indeed, in their seventies the pair became unlikely (and probably uninsurable) movie stars, appearing together and separately in a spate of films until their deaths in 2001 and 2000, respectively.

It's a star vehicle in the good, old-fashioned sense of the term; it's a little too broad, relying at times on sophomoric humor, and it's shamelessly manipulative and sentimental though never quite syrupy. But it's also a terrific showcase for its two stars, as well as several veteran supporting players, all of whom deliver highly satisfying, polished performances.

Despite the film's continued popularity the Blu-ray edition is almost defiantly no-frills; the only extra is a standard-definition trailer. But it's also the first time the film has been available in its proper widescreen aspect ratio - the 1997 DVD and its various reissues were all full-frame. The 1080p transfer is quite nice; on one hand the two stars look even older - Matthau looks particularly decrepit - but the high-def image also helps bring out the subtleties of all the performances and better conveys the film's authentic Wabasha, Minnesota atmosphere. 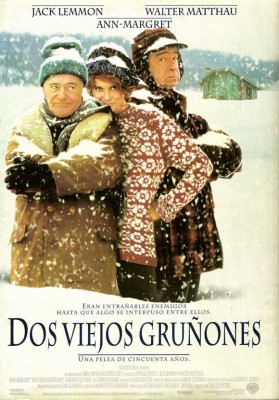 John Gustafson (Lemmon) and Max Goldman (Matthau) are ornery next-door neighbors who have been feuding since 1938. Both men are widowers with adult children: John is a retired high school history teacher with a daughter, Melanie (Daryl Hannah), whose marriage is on the rocks, while Max is a former TV repairmen whose bachelor son, Jacob (Kevin Pollak), is running for mayor.

Shortly before Thanksgiving, eccentric free-spirit Ariel Truax (Ann-Margret) moves in across the street. Both men are smitten, and the film covers their rivalry in attempting to woo her. At the same time, John battles a tenacious IRS agent (Buck Henry) chasing after some back taxes and penalties, bait shop owner Chuck (Ossie Davis) also briefly moves in on Ariel, and John also must contend with his cantankerous, lecherous 94-year-old father, J.W. (Burgess Meredith).

Like Cocoon (1985) and its sequel too much of the film has the old men doing the kind of "cute" and unexpected things younger screenwriters - writer Mark Steven Johnson was just 29 when this was made - find funny, like behaving like kids (John imitates Macaulay Culkin's aftershave bit from Home Alone) and teenagers (after a night of lovemaking, John dances around his house like Tom Cruise in Risky Business), or swearing and talking about sex as if old folks never ever swear or talk about sex.

Still, this is balanced with a lot of real emotion: John worried about losing his home to the IRS but unwilling to discuss it with his daughter, the loneliness of the old widowers and their preoccupation with their myriad ailments, the boredom, their packrat-like existences.

To their credit, Lemmon and Matthau play their ages; Matthau even has an alarming nude scene in a bathtub - a sight as shocking as what Jack Nicholson finds in Room 237 in The Shining*. Each had been acting in movies since the mid-1950s. Matthau had enjoyed starring roles from the mid-1960s until the late-1980s, 1988's The Couch Trip being his last significant role. Lemmon's starring career stretched back even further but petered out at about the same time; 1989's Dad was his last big film until Grumpy Old Men revived it - before that, Lemmon had been reduced to supporting and guest parts in films like Glengarry Glen Ross and Short Cuts. The pair had last teamed up for Billy Wilder's final film, Buddy Buddy (1981); they were both in Oliver Stone's all-star JFK (1991) but had no scenes together. Even so, many in the audiences recognized this as an almost-Lemmon/Matthau teaming, and were happy to see them reunited for Grumpy Old Men.

The film spawned three more teamings: the sequel, Grumpier Old Men (1995), plus the unrelated Out to Sea (1997) and The Odd Couple II (1998), the latter a direct sequel to the film they had starred in 30 years before. None were Academy Award material, but all three were similarly, breezily enjoyable, though the last was pretty feeble.

Grumpy Old Men couldn't have been much of a challenge for either man, but they're funny anyway. Matthau's pained reactions to a mysterious smell emanating from the back seat of his truck - Lemmon tossed a dead fish in there the day before - is very funny.

Nearly lost amid all the feudin' and a-fussin' is Ann-Margret, then in her early-50s, who surprisingly comes off best. She's a vivacious, sexy, earth mother. She, more than Lemmon and Matthau, make their mutual attraction life-affirming, touching, and believable. It's an underrated performance. As Lemmon's ancient foul-mouthed father Meredith nearly steals the film - he refers to septuagenarians John and Max as those "damn kids." The picture revived the 1970s fad of running outtakes over the end credits. The ones that unspool at the end of Grumpy Old Men are quite hilarious, including multiple alternate takes of Meredith's grandpa watching Chuck (Ossie Davis) entering Ariel's lair: "Looks like he's going to enter the holy of holies," speculates J.W., "coitus uninterruptus!" and "Looks like Chuck's going to put the hotdog in the bun!" "Looks like Chuck's taking the skin boat to tuna town!" Meredith's clipped delivery is priceless each time, as are Lemmon's disgusted reactions.

Grumpy Old Men is presented in 1.78:1 widescreen, a 1080p transfer approximating its original 1.85:1 release. The transfer is bright and captures the feel of small town Minnesota in the winter quite well, though a lot of the film seems to have been made at Warner Bros. in Burbank. The Dolby TrueHD 2.0 audio is fine but unremarkable. English, French, and Spanish subtitles are included. The only Extra Feature is a standard-def, 16:9 trailer.

Though no great shakes I confess to enjoying Grumpy Old Men every time I see it, which is once every four or five years, and each time seems as fresh as the first. Maybe it's a better film than I give it credit for, and maybe it's a more durable, popular film than Warner Home Video seems to realize. The Blu-ray disappointingly has no real extras, but the transfer is a big improvement over previous DVD editions, and so this is Recommended.


* Ten years ago, when I worked at the Warner Bros. Archives, I spent several days going through Grumpy Old Men's publicity files, including all the contact sheets and other miscellaneous photos of hairy, flabby, freckly, liver-spotted Matthau in the tub. I don't think I ate for a week after that.