Why control the births when we can increase the deaths? 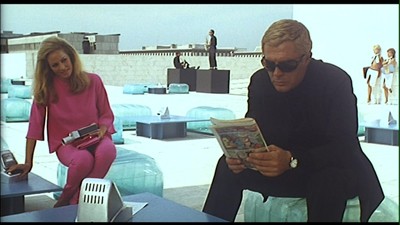 In an unspecified 1960s future, boredom has so overtaken the world that a labyrinthine organization has been created to stage elaborate ten-part hunts. A group of alternating hunters and victims duel with each other to contend for a top spot. The survivor of ten hunts wins the big prize--fame and money.

Adapted from a story by Robert Scheckley, Elio Petri's 1965 sci-fi thriller The 10th Victim is a loose-cannon satire, less concerned with its commentary than it is using what little commentary there is to get away with the sex and violence that form its basis. This is no serious critique, but a fun B-movie that is all the more fun by how much it flaunts that fact that it's not taking itself too seriously.

Marcello Mastroianni stars as Marcello Poletti, a tired loverboy in the middle of his homicidal run. Playing a near parody of the usual Mastroianni character, Marcello is an aging lothario who has just gotten an annulment for his first marriage with Lidia (Luce Bonifassy) and is now trying to dodge a second marriage to his long-time mistress, Olga (Elsa Martinelli). If he can win the hunt and replenish the accounts Lidia has emptied, he can buy his way out of anything, using the cash to get far away from the ladies that hound him.

Bad luck, then, that his next pairing is as the victim to an American hunter, Caroline Meredith (Ursula Andress). The knock-out blonde sidles up to him in the guise of a reporter doing a piece on the love habits of Italian men, and though Marcello suspects that she is the one out to get him, he can't be sure. Killing the wrong person could result in a lengthy prison term--and why get out of the imprisonment of matrimony just to end up behind bars? The two set up various elaborate schemes to expose the other, leading their intended prey into a staged scenario that would allow them to best plug their corporate sponsors when they go in for the final blow. It's a bit like reality TV, though Scheckley and the flick's coterie of screenwriters (including Tonino Guerra, who penned Antonioni's Beyond the Clouds) clearly predicted the trend as being somewhat less exploitative than what we would end up with. It was 1965, how could they know we'd sink so low? Death would practically be a relief at this point. 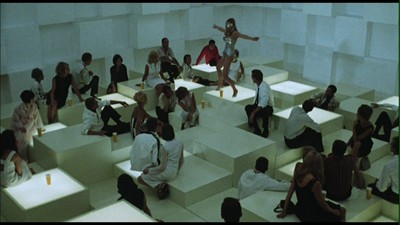 There are little touches throughout that hint at the more elaborate design of this movie's future world. A brief scene shows that Marcello hides his parents in a secret apartment rather than turn them over to the government. Age is scorned, and so the old and infirm are weeded out, and the hunt is a way to keep overpopulation at bay. At the same time, The 10th Victim doesn't play on any imagined technology, its world is styled in the same mod tailoring as was in vogue at the time it was made. Mastroianni wears slick suits, Andress is tarted up in sexy go-go gear, and Martinelli is a black-and-white fashion plate. It's a vision of cool that is loose in form, The 10th Victim often seeming like a weekend lark by a bunch of pals rather than a well-planned film.

Not that there is anything wrong with that. A celebration of the fantasy is actually part of Elio Petri's intention. In our one look at religion, we see that Marcello is a clergymen of a cult that worships the sun (though it's hard to tell if he really means it or if he's just pursuing another revenue stream), and the religious fanatics who oppose this sect are labeled Neorealists. Elsewhere, Fellini is paid tribute by having a street named after him. Petri is squaring off against the old guard, pitting the new limitless freedom represented by Maestro Federico against the old-school pragmatism of the post-War directors. It's his intention to have a good time, his desire to be less serious, and this makes The 10th Victim more of a goofy comedy rather than a space-age thriller.

Things do get a little serious in terms of Marcello's lovelife, though. Here is a man trying his best to stay one step ahead of anything that would tie him down, and Caroline proves equally dangerous for his heart in matters of romance as she does in actually aspiring to stop it beating. When Marcello tells her, "I knew you were my hunter," it's a love metaphor, not just part of the game. The two have been doing the dance since they met, tumbling into passion in direct violation of the roles they've been assigned--in life, they are also ill-matched, he a commitment-phobe and she frigid and sexless--or perhaps it's because of these conflicting traits that they are undeniably drawn to one another. It's all about sincerity in The 10th Victim. How much does Petri mean it? How much did the Neorealists? Is anyone who they say they are, and what is true versus a trap? Does Marcello truly love Caroline, and vice versa? If life and death can be a game, feeling may have also lost its potency. Thus, in an absurd comic turn, Marcello receives a fate worst than death in the end.

The 10th Victim is a hoot, and despite all the internal debates over meaning, I don't think we're meant to take it for any more than that. Marcello Mastroianni is always worth watching when he plays the weary bounder, and though Andress is a bit of a non-personality, she sure is sexy. The look and feel of 1960s Italy is ever-present, and that alone makes the movie worth the time. Though it may be a struggle for the leads to make it through all their hunts, it's certainly no struggle for us to watch them try. 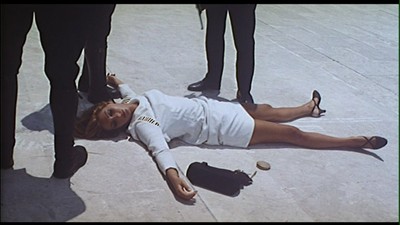 Video:
Anchor Bay released The 10th Victim on DVD in 2001, and that disc received decent marks on this site from DVD Savant when it was released; I have not seen that edition, and indeed, had never seen this film prior to this viewing, so I can't compare. The 1.85:1 anamorphic transfer on this disc, however, is of fairly good and appears to make good use of the sources available. The colors are occasionally muddy but overall, nicely rendered, and though there is some fuzziness at times, the image quality is fairly clean throughout.

Sound:
As with a lot of 1960s Italian films, there were likely a variety of languages spoken on set, and thus dubs are very normal. The mono mix of the English dub sits alongside the Italian version, and both sound fine, though not spectacular. A quick sampling made it pretty obvious to me that the Italian "original" was the way to go, and the subtitles were nicely done. They are rendered in mustard yellow. 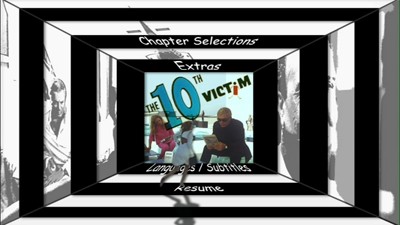 Extras:
A theatrical trailer and text-based bios of Andress and Mastroianni are the only extras on the disc.

The 10th Victim comes packaged in a clear plastic case with a double-sided cover; a chapter listing is printed on the inside front cover. Kudos to Blue Underground for the stylish and fun animated menu on the DVD.

FINAL THOUGHTS:
Recommended. Elio Petri's adaption of Robert Sheckley's The 10th Victim is fun lo-fi sci-fi. This 1960s Italian film features the fantastic Marcello Mastroianni and the voluptuous Ursula Andress as participants in a 21st-century hunter/killer game. Squared off against each other, they find love and death, which we all know for a guy like Marcello can often be the same thing. Full of cheeky references to Italian film movements, silly futuristic details, nods to comic books, and a healthy dose of self-parody, The 10th Victim is a solid futuristic romp. 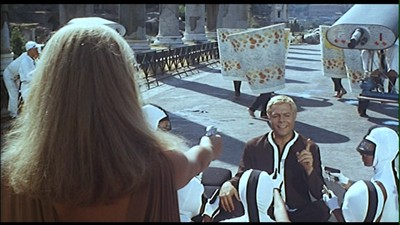