Edition Filmmuseum // Unrated // June 26, 2009 // Region 0 // PAL
List Price: €22.99 [Buy now and save at Edition-filmmuseum]
Review by Stuart Galbraith IV | posted July 13, 2009 | E-mail the Author
Essentially an illustrated astronomy lecture in the form of a special effects-filled German silent film, Hanns Walter Kornblum's Wunder der Schöpfung ("Our Heavenly Bodies," 1925) is a feast for the eyes. It covers a wide range of topics over the course of its 92 minutes, from the history of astronomy to an imaginary exploration of the solar system and beyond by spaceship, from faster-than-light travel to Einstein's Theory of Relativity. Though science has made innumerable new discoveries and disproved faulty theories the film is, even now, surprisingly relevant, entertaining, and informative. Using all manner of special effects, especially myriad forms of animation, Wunder der Schöpfung is an amazing cinematic accomplishment, comparing favorably to contemporary fiction films like Fritz Lang's Metropolis and Harry Hoyt/Willis O'Brien's The Lost World.

The region-free PAL DVD, released by Filmmuseum München, has a few minor authoring flaws but otherwise is a beauty, with the tinted and toned film looking almost brand-new at times. Kornblum's equally intriguing short film about The Einstein Theory of Relativity (1923) is also included, there's an extensive DVD-ROM section, and a beautifully illustrated full-color booklet with essential essays about the films and Kornblum in both English and German. 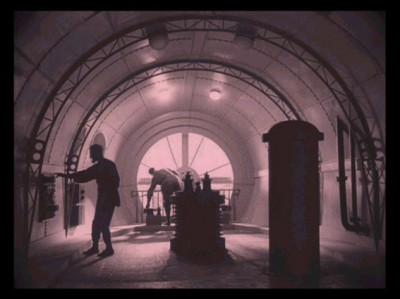 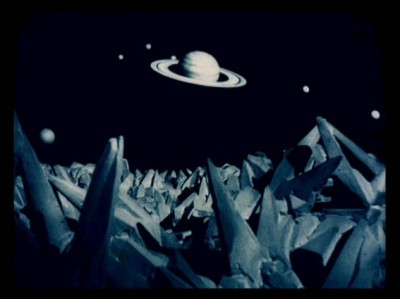 Wunder der Schöpfung is divided into sections running about 10-15 minutes apiece. One covers early concepts about the heavens and includes animated recreations of these theories, as well as live-action footage of actors playing Galileo, Isaac Newton, Copernicus, etc. Other sections illustrate Newton's Three Laws, elliptical orbits, the tides and, eventually, there's a fanciful tour of the solar system and beyond aboard an imaginary rocketship, which on the inside resembles those seen in the later Flash Gordon serials, while in a brief exterior shot it looks like a flying saucer trapped inside a colossal gyroscope.

One section late in the film, "At the Gates of Infinity," may have influenced Stanley Kubrick. There's a resemblance to shots in this and concepts that later turn up in 2001: A Space Odyssey's "Jupiter and Beyond the Infinite" and one sequence featuring actors walking on the spaceship's cabin walls in zero-gravity is not unlike what appears in Kubrick's film. The film concludes with hypotheses about the ultimate fate of the earth: Will she freeze when our sun dies out, or will it collide with another heavenly body?

The lecture aspect of the film takes the form of wordy German-language inter-titles. English-speakers have the option of listening to English narration, a direct translation of the original German, rather than standard English subtitling. I was a bit leery about this unusual translation method, but in this case it works quite well. The unidentified narrator has a smooth Mid-Atlantic-accented delivery, and because there's so much text - most of the film simply alternates between title card and shot, title card and shot, etc.; it's almost like watching an animated slide show - the result is in keeping with the lecture-style presentation. A lyrical, unobtrusive piano-violin score also accompanies the feature.

Most of the shots of various planets, moons, and stars revolving around one another appear to have been accomplished with stop-motion animation of carefully-lit miniatures that, like George Pal's later Destination Moon (1950) adhere to what was established scientific fact back then. But virtually every other type of special effect trick is used at some point: time-lapse photography showing the tides, what appears to be clay-on-backlit-glass here and there, an articulated puppet dinosaur for one short scene, mattes and forced perspective for a brief sequence dramatizing Gulliver and the Lilliputians from Swift's classic satire.

Wunder der Schöpfung, restored primarily from combining two different sources, is complete except for a few missing shots. The image is outstanding, very clean and free of dirt, scratches, and other damage, and attractively tinted throughout. A couple of times a cut between live-action or special effects footage and an inter-title is marred by some fleeting (a frame or two) of digital break-up. However, this only happens about three or four times in the entire film, and mostly is confined to the first reel. The 2.0 stereo scoring and English narration is quite good. The show can also be played with German narration, or none at all.

The Einstein Theory of Relativity (1923), utilizing an American print from the George Eastman House with English inter-titles (with optional German narration), runs 29 minutes and has much the same appeal. It takes highly complex concepts and through visual examples makes them understandable. It's a fascinating little film. Also included is a 43-minute audio-only interview - unfortunately in German only - from 1968 with the by-then 90-year-old Kornblum, one of the few records of his career as a filmmaker.

An invaluable 20-page booklet, with English-language essays about the filmmaker and the production of the two films, is also included, as are archival documents presented as a DVD-ROM feature that rounds out the supplements.

Wunder der Schöpfung is a one-of-a-kind movie, fascinating for its mostly accurate science and depictions of outer space more than 30 years before even the first artificial satellite and the earliest pictures taken from outside the Earth's atmosphere. It's lively and uniquely entertaining, and so well presented here it's a DVD Talk Collector Series Title.