Paramount // Unrated // June 9, 2009
List Price: $49.99 [Buy now and save at Amazon]
Review by Stuart Galbraith IV | posted July 18, 2009 | E-mail the Author
Court's in session once more as Perry Mason debuts its fourth big season on DVD, in CBS/Paramount's release of Perry Mason - Season 4, Volume 1, a collection of the first 16 episodes from the 1960-61 season. The good news is that the show is exactly as good as it's been all along: the shows have great production values and style, the guest-casts are like a Who's Who of classic TV character actors and actresses, the regular cast is a joy to watch. The bad news, at least for the hapless reviewer vainly trying to say something new about the series, is that it's exactly as good as it's been all along. Except for a few supporting cast changes (ill-health forced Ray Collins to retire before it ended), the difference between the earliest Perry Masons and the last ones is negligible. It's one of those shows where the only way to tell what season it's from is by the slightly varying opening titles.

This is not a complaint. While I would have like to have seen a little bit of subversiveness occasionally (and there was - very rarely, and only slightly), the calm, expert legal mind of attorney Perry Mason (Raymond Burr), the warmth and humor of tireless secretary Della Street (Barbara Hale), and their worldly, slightly cynical pal-colleague, P.I. Paul Drake (William Hopper) have by this point become old friends, and in those days as now, familiarity bred affection, and network television wasn't about to tamper with a good thing. 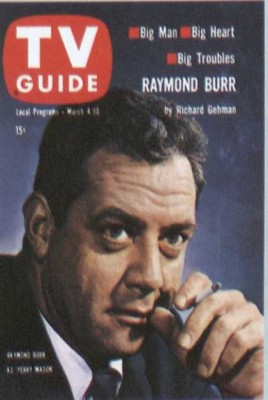 For those wanting general impressions of the show, this review incorporates elements from the six previous Perry Mason reviews penned by this writer. Below that are some comments particular to this edition.

For the uninitiated, the show revolves around Los Angeles-based celebrity attorney Perry Mason (Raymond Burr), his loyal assistant Della Street (Barbara Hale), and their pal Paul Drake (William Hopper), a breezy private detective steadily in Mason's employ. Each week Perry comes to the rescue of a defendant (usually) accused of murder. In most of these cases, Perry is up against wily police Lt. Tragg (Ray Collins) and District Attorney Hamilton Burger (William Talman).

Though the show's format would seem pretty restrictive -- Perry's clients are always innocent, hapless and exasperated Burger always loses the case, and Perry always exposes the real murderer -- the writers manage to come up with a wide and engaging variety of storylines. Despite these restrictions the show so far never feels likes it's slipping into a tired routine.

Essentially a mystery show with a courtroom setting for its climax, Perry Mason's single flaw is that as a mystery it doesn't really play fair with its audience, though the same could be said for B-movie mysteries of the 1930s and '40s, radio mystery shows, and virtually all other TV whodunits. Sherlock Holmes and Hercule Poirot (to name two examples) faced seemingly irresolvable cases with bizarre, inexplicable clues -- yet the solutions were always quite simple and logical. The great literary detectives simply had powers of observation lost on us mere mortals, even though we're armed with the same information as those protagonists. .

On the other hand, Perry Mason, the Charlie Chan movies, Murder, She Wrote, etc. operate under a different set of rules. The resolutions to the mysteries don't always make sense and audiences often don't have access to the same clues the protagonists do, and they often leap to conclusions and solve crimes in ways that don't hold up to scrutiny. Instead, these kinds of movies, TV and radio shows rely heavily on atmosphere, characterization and star power to entertain their audiences. One might guess who the real murderer is, but in most cases you won't be able to solve the mystery on your own.

Fortunately Burr, Hale, and Hopper and just wonderful in their roles. Apparently they became close friends in real life, and this camaraderie very much extends to their scenes together on the show. About the middle of season two, Talman's Hamilton Burger started getting more shading, a welcome addition. Often regarded as television's most thankless role, Hamilton Burger this season still is Perry's weekly nemesis, but now he's more affable outside the courtroom and flexible in, especially when new evidence casts a shadow of a doubt over the guilt of Perry's client.

The Case of the Disappearing D.A.: William Talman appears in the season opener, "The Case of the Treacherous Toupee" and the following week's show, "The Case of the Credulous Quarry," then disappears entirely until "The Case of the Fickle Fortune," a January 21, 1961 episode. And that's it as far as this set goes. What happened was Talman had been arrested earlier that spring at a wild party in Beverly Hills, where supposedly nude guests were cavorting about, and police reportedly found marijuana at the scene. (One can imagine Talman's Hitch-Hiker character there, but...Hamilton Burger?) CBS gave him the boot while the previous season was still in production, and he missed that year's last batch of shows, but in a touching show of support and unity, members of the cast and crew lobbied for his reinstatement while fans of the show, most of whom couldn't have cared less what William Talman did on his days off, sent angry letters to the network. Eventually they brought him back. I don't know this but suspect the first two season four shows were probably shot in late-August or even early-September, after a bunch of episodes filmed earlier in the summer were already in the can, and that CBS rushed these two through to get Talman back on the air, at least for a couple of early shows during the crucial season premiere weeks.

Talman comes back for good around the end of February 1961, but in-between a number of actors take over his pole position on the show. Kenneth Tobey plays a deputy D.A. in two episodes (and a third later on), Paul Langton appears in another one, Robert Karnes appears in five shows, and so on. Conversely, Ray Collins, starting to look frailer owing to his long battle with emphysema, manages to appear in just about every show in this set; with Talman's absence his presence was needed more than ever. During the second-half of season four, Talman's back while Collins appears less and less. He's in 14 of the first 16 season four shows, but only six of the next 12, a second-half of a season cut short by the 1960 Writers Guild of America (WGA) strike, which dragged on for six months. (CBS probably should have broken these down into two DVD sets of 14 episodes.)

One other note about this set: Two episodes, "The Case of the Treacherous Toupee" and "The Case of the Envious Editor," previously included in the Perry Mason - 50th Anniversary Edition set are included here as well, but those are the only repeated episodes.

CBS DVD's Perry Mason - Season 4, Volume 1 presents 16 terrific-looking episodes spread over four single-sided, dual-layered DVDs (four shows apiece). The black and white full-frame image is very sharp and detailed with strong blacks. The Dolby Digital English mono is generally quite good, too. Episodes are not time-compressed, with some running close to 52 minutes. The music does not appear to have been altered. The discs are closed-captioned, though no other subtitle option is offered.

Perry Mason is a terrific show, well-produced with a highly enjoyable regular cast and weekly guest stars familiar to those who watch a lot of '50s and '60s television. The fact that the show never really changed all that much during its nearly decade-long run matters not one bit to its fans, this writer included. Highly Recommended.