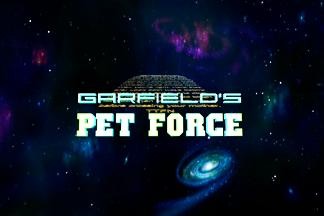 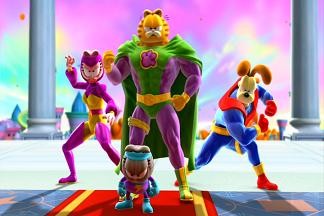 Since that time, Garfield has continued to proliferate in the visual media, with animated specials and cartoon series for television, a couple feature films, and now as a series of direct-to-video computer-generated movies.

Garfield's Pet Force is the latest entry in the last category. At 78 minutes, it's a breezy and colorful romp, with a mildly-inspired attempt to recast the well-known residents of Jim Davis's comic strip as comic book superheroes (and villains). The fact that the film is written by Davis himself lends some charisma (not to mention credibility) to the goings-on. Adults will find just enough quips directed at them - including a couple surprising zingers at lawyers in the first few minutes - to not be bored by the otherwise juvenile narrative. However, this home video cartoon is squarely aimed at the little ones. 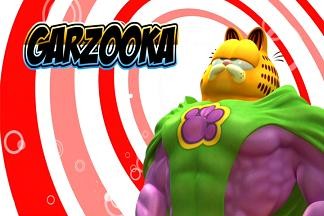 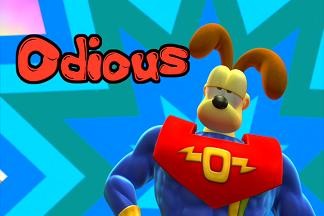 Garfield's Pet Force opens on the planet Dorkon, after a not-so-funny parody of the scrolling text that precedes Star Wars movies. On this planet, Garfield is Garzooka, the super-buff leader of Pet Force, whose membership also includes Odious (Odie with a super-strong tongue), Starlena with a super-powerful gaze, and the super-fast Abnermal. Dorkon is ruled by an Emperor modeled after Jon, Garfield's owner. Jon is so desperate to marry someone that he impulsively proposes to, as the DVD's back cover art describes her, "an evil comic book demoness." Geez, who writes these blurbs? In any case, this demoness (who I suspect may be modeled off of Jon's veterinarian girlfriend in the newspaper strip) tricks Emperor Jon into giving her access to a device called the Moscrambulator, with which she plans on ruling the universe. The Moscrambulator, created by Jon's put-upon adviser Professor Wally, becomes an important device (in a literal sense) in the plot of the story. It rather magically scrambles up and animates whatever its rays hit.

With Pet Force defeated, Garzooka takes a rocket to whatever-planet the talking Garfield we all know lives to enlist the help of the fat cat and his friends.

This story is encapsulated within a comic book that Garfield and his friends read during a cookout. However, it seems that the story is very "real," as first Garzooka and then our evil villains literally pop out of the storyboard frames and into their universe. This framing device allows for a few postmodern jokes about comic book collectors and superheroes. It's also a convenient device to keep the narrative moving without a dull moment. 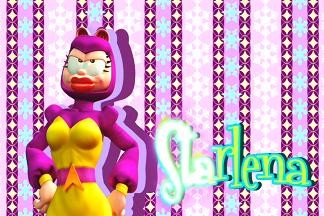 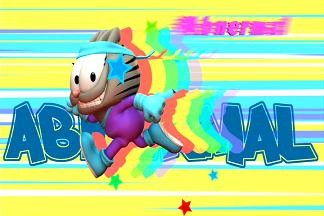 And that's the appeal of this home video concoction: it's never dull nor does it go too overboard with its cartoon violence (though really little kids may be upset with townspeople transformed into zombies by the villainess - however, it does lead to a couple funny lines about zombies that adults will appreciate and, of course, as a G-rated film, no ultimate harm comes to anyone). No one is going to mistake Garfield's Pet Force for a Pixar production, but for what it is, it's surprisingly decent. I'll give it a mild recommendation for long-time fans of Garfield and parents with little kids. It doesn't really aim to appeal to others, so if you don't fall into either category, you can definitely take a pass on this. 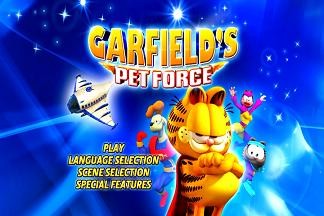 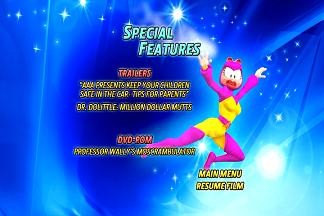 Fox presents Garfield's Pet Force in anamorphic widescreen with a 1.78:1 aspect ratio. Computer-generated animation tends to look pretty good on DVD, and this film is no exception. Colors are rich and bright, and details are fine.

The lone audio track is an English language Dolby Digital 5.1 affair. No complaints are warranted really in the sound department; dialogue is always strong and clear, and special effects are dynamically presented in the mix. Optional subtitles are available in English, Spanish, and French.

Quite a few things precede the main menu: an auto safety spot from AAA, and trailers for Dragonball: Evolution, Garfield's Fun Fest, Garfield Gets Real, The Strawberry Shortcake Movie, and Angel Wars: Guardian Force. The AAA spot is separately accessible via a Special Features sub-menu, along with a trailer for Dr. Dolittle: Million Dollar Mutts.

The only other extra is a DVD-Rom game called Professor Wally's Moscrambulator, taking inspiration from the character and device from the movie. It wasn't really clear how to access the game in the menu's directions, as it only dictated computer requirements to run the program. I was able to access it by finding the EXE file on the disc's contents. It's a fairly simplistic "game" that allows its users to create their own Garfield superhero using templates, name the hero, and then print an image of the hero out. This is not a game that will occupy a child's time for very long, but as an extra on a movie disc, it's okay.

Aside from an occasional lawyer or zombie joke for the adults (and some comic book quips), Garfield's Pet Force is aimed squarely at little kids. As such, it's a reasonably diverting and colorful adventure that creates intergalactic superhero versions of the newspaper comic strip's major characters. Mildly recommended, if you have little ones.