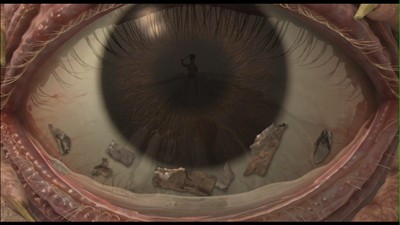 Everybody knows this pain: you see a great trailer, it makes you want to see the movie it's promoting, you see the movie, and you realize it was just a good trailer. Such is the case with Big Man Japan, which looked pretty great when I saw the preview on YouTube. Hell, it sounded pretty great when my friend described it to me and told me to find the trailer online. That promo clip runs under two minutes, though, and having now sat through nearly two hours of the movie itself (and facing about as much time on bonus features, as well), I can only surmise that this really was a two-minute concept stretched into a full-length yawn. Even the producers at SNL would have balked before taking this one beyond the stoned-at-3-a.m. pitch.

Big Man Japan is a mockumentary from Hitoshi Matsumoto. Leaping from the small screen to the big one, the Japanese comedian writes, directs, and stars in this thing. He plays Masaru Daisatô, a.k.a. Big Man Japan, the sixth in the family line of superheroes/monster fighters. The Big Men all grow to gargantuan size when zapped with electricity, trundling off to defend Japan from all sorts of whacky creatures. The current Big Man's Grandfather, referred to as Fourth and played by Taichi Yazaki, was a popular hero when there were a ton of monsters and being a giant monster-smasher was all the rage. The profession has faded since then. The Fifth Big Man died due to his own inferiority complex, and the Sixth is apparently the last of a dying breed. Not many monsters left, and not many monster fighter fans. His TV show has now been relegated to the 2:40 a.m. time slot.

Not that Daisatô's personality does him any favors, either. He's a real sadsack, living along in a house covered with garbage and graffiti, lying about the failure of his marriage and his relationship with his daughter. It's amazing this guy can get out of bed, much less get into the giant purple underwear he uses to cover his privates when he goes Big. With a giant eraser haircut straight out of David Lynch or, more likely, a Kid 'n' Play music video, and his ever-present umbrella/club, he--well, he doesn't rush into battle. There isn't much rush about anything in this movie, no urgency. Big Man rides his scooter out to one of two electrical plants to get juiced, and then he goes off to find the monster he's been summoned to fight. You'd think in all that time there would have been much mayhem, but usually the monster is just kind of hanging around. Big Man doesn't even really go for the gusto in the brawl, either. Half of the monsters we see him fight basically die by accident. 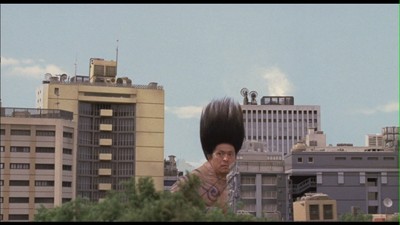 This lack of excitement falls over the entirety of Big Man Japan like tar. The monster fighting takes up probably less than 20% of the film, and the rest of this snoozer is looking at how pitiful Daisatô's life is. The beginning of the movie takes more than twenty minutes to introduce its central concept, as if we somehow needed to be teased that this schlub is really a biological monstrosity. I understand that Matsumoto is trying to make a comment about how jaded the world has become, and how the adventurous spirit of the past has been lost in a big pile of "I don't care," but at the same time, he has to convince me that I should care; otherwise, ironically, he makes the point for the other side. (Though, I do wonder, is this a fault of the movie exclusively, or is the mockumentary genre just played out? Is the illusion of reality busted to such a degree that we can no longer be patient with false plays for authenticity? And is it worse that the director here defies his own conceit by showing us flashbacks into Big Man's childhood without making any pretense that they were somehow filmed?)

Things turn for the better about 2/3 or so in. The monster fights, despite being rubbery low-rent CGI, are the highlight of the picture just for the craziness of the monsters themselves. If you've ever read any Japanese ghost stories, you know that their old legends are full of some of the most bizarre creatures you're every likely to find. The first guy Big Man takes on looks like a walking strait jacket with a bad combover, the second is a giant head sitting atop a giant leg. The third is a hairy torso with a lower appendage with an eyeball on the end that it whips around like a mace. For as ho-hum as the rest of the stuff is, these guys are really fun, and the story picks up steam after Big Man beats the Eyeball Kid. Before he can catch his breath, Big Man is knocked down by a new monster, a twisted devil that looks like a decrepit version of that old Harvey Comics character Hot Stuff. 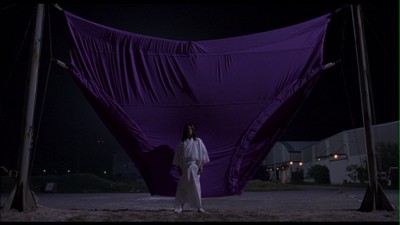 Hot Stuff beats the snot out of Big Man, and he runs away, and the supposed hero's cowardice sparks a renewed interest in the super-sized gladiator. It also sparks an upward trajectory on the weirdness and a downward slide for the main character, both of which set him up for enough redemption to fill those grape-flavored Incredible Hulk undies of his. But wait...no! Matsumoto isn't going to give us the glitzy sports-movie ending. Instead, he cuts to a bizarre Ultraman parody that both lampoons the fake looking but oh so popular TV superhero style (if you don't know Ultraman, think Power Rangers) and maybe a little reality TV, as well. Even Big Man and Hot Stuff are no longer CGI, but now wearing ludicrous muscle suits. What the hell does this last ten minutes have to do with all that has led up to it? Beats me. I imagine that Matsumoto wanted to make one last attempt to defy expectations, but instead he ended up creating a cop-out that is emptier than the cliché he's decided to discard. Bummer.

There's enough raw material here that a merciless editor might be able to take Big Man Japan and carve an enjoyable movie out of it. Pick up the pace, cut out the padding, give us less of Matsumoto's sad face, convincing as he may be as a loser, and get straight to the butt kicking. Or, you know, use some of that DVD technology and give us the option to just watch the fights. Make it like a porno disc for geeks, select your favorite fetish and have at it. Otherwise, Big Man Japan is one thin idea stretched way too long. So long, in fact, that it breaks, and apparently the "auteur" doing the stretching was buried too deep in his foam-rubber muscle outfit to notice. 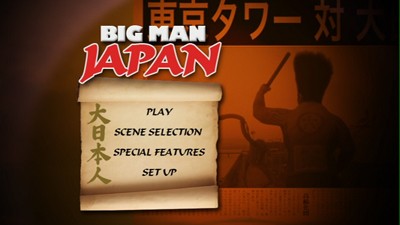 Video:
Big Man Japan comes to DVD at its original aspect ratio of 1.85:1. The transfer is decent, not great. There is an interesting contrast between the "documentary" scenes and the computer-generated battle sequences that looks pretty good, one offering a more gritty reality and the other a highly polished fantasy. The colors are mainly good, though the darker aspects can be spotty and the resolution can appear soft at times.

Sound:
There are two mixes of the original Japanese soundtrack, one in 5.1 and the other 2.0, both Dolby Digital. Subtitles are available in English and Spanish. The sound is pretty good, with some nice background effects that at times adds depth to the atmosphere of the piece. The dialogue is kept up front mostly, and sometimes is a little flat, but otherwise, a decent job. The subtitles appear in white and are easy to read. 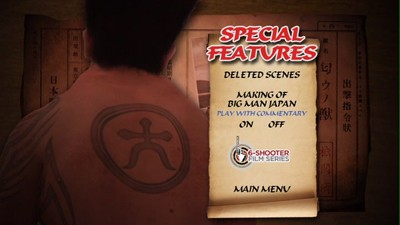 Extras:
Nearly an hour of deleted scenes adds to the tedium. Most of them are either extended versions of interviews with various characters or bits that were cut altogether, and honestly, add nothing to the impact of the film by appearing here. No fight scenes were scrapped, so don't expect any added creatures or added excitement.

Lasting more than an hour is the obligatory "making of" featurette, a fairly comprehensive look at how this was put together, from concept up. Oddly enough, this documentary has a director's commentary. Yes, you read that right, Hitoshi Matsumoto comments on the "making of," not on the movie. It's a fairly interesting concept, and the comedian's humor does get to shine through in some of it, but if you're as bored with Big Man Japan as I was, overkill doesn't even begin to describe what it takes to get through all this. (Both audio tracks on the documentary are Japanese, both have English subtitles.)

There are also some trailers for the "Six Shooter Film Series," which includes Let the Right One In, Timecrimes, Donkey Punch, Special, Eden Log, and the Big Man Japan trailer.

FINAL THOUGHTS:
I'm deep enough in nerd culture myself to know that a lot of you reading this care little for what I have to say, and if the concept of Big Man Japan is as alluring to you as it initially was to me, there is nothing that can dissuade you from seeing it. (Chances are, you also sat through both Transformers movies and Snakes on a Plane, too, so that puts me three ahead of you!) Luckily this time around, there is enough in the fight scenes for me to say you should Rent It. The monsters in Big Man Japan are pretty crazy, and a good fast forward button means you can find them pretty easily. Still, don't be fooled, anything satirical about this movie arrives dead on arrival, and if you just want to see huge creatures knocking each other around in Tokyo, there's a lot of boring junk that gets in the way. Kind of like if you really only want Lucky Charms for the marshmallows, there's way more cereal that comes with it that you'll have to contend with to get those pink hearts, yellow moons, orange stars, green clovers, and blue diamonds. Adding to the disappointment, I'm pretty sure they left out the hearts and the diamonds this time around. Like I said, bummer. 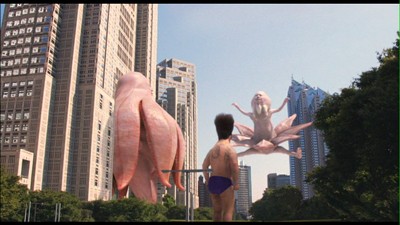