First Run Features // Unrated // August 18, 2009
List Price: $24.95 [Buy now and save at Amazon]
Review by Chris Neilson | posted August 14, 2009 | E-mail the Author
Gendun Choephel was born in 1903, the year Tibet was invaded by Great Britain. He died in 1951, the year Tibet was invaded by China. During his lifetime he assumed many identities: monk, traveler, researcher, author, translator, painter, journalist, philosopher, agitator, husband, prisoner, and alcoholic, but he would probably want to be remembered foremost as a Tibetan nationalist. The life and legacy of Gendun Choephel is the subject of Swiss filmmaker Luc Schaedler's 2005 documentary Angry Monk: Reflections on Tibet. 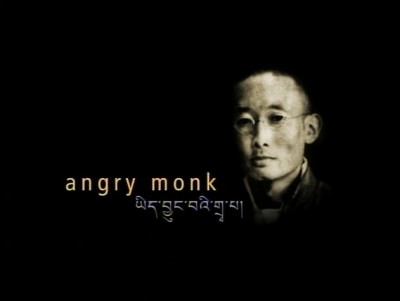 A Buddhist monk from the age of 14, Choephel excelled at theological debate. Although recognized as the reincarnation of a high Llama, Choephel left the monastic life in 1934 to see the wider world first hand. He became fast friends with a British Christian missionary who taught him about the technological marvels embraced in the West, and to the Indian Buddhist scholar and Marxist revolutionary Rahula Sankrityanan, who invited Choephel to accompany him back to India.

Choephel encountered the Indian independence struggle against the British Empire first hand. There he also took up painting, researched Tibetan political history, wrote erotica and travelogues, frequented prostitutes, and took up drinking. In 1946 Choephel joined the Tibetan Revolutionary Party to agitate for a Tibetan government free from religious or foreign control. Upon returning to Tibet, Choephel was imprisoned by the Dali Lama's government in 1947. During his three-year incarceration, Choephel's health and spirits declined rapidly. When he was released in 1950 on the eve of the Chinese invasion he was physically and psychologically broken. Thereafter, he quickly married, secluded himself from friends and well-wishers, and proceeded to drink himself to death.

Choephel's now best known book, a political history of Tibet, was published posthumously. Although Choephel is little known outside of his homeland, his legacy has gained increasing stature among Tibetan nationalists, especially among those seeking a secular state.

Schaedler approaches his subject through a mixture of modern travelogue tracing the steps of Choephel's life, archival material, and interviews with modern Tibetan thinkers and with people who knew Choephel personally. Schaedler's intent in bringing Choephel's biography to the attention of western viewers is to suggest that there's another alternative to the Tibet political question other than Chinese control or a Buddhist theocracy.

Angry Monk: Reflections on Tibet is a mixed success. Schaedler appears to have recourse to only a handful of photos that get used repeatedly. Schaedler also seems hesitant to delve into Choephel's actual writings, content to leave it to interviewees to sum up far too quickly. Thus, for example, it's not clear whether Choephel actually came very far in proffering a viable third way to theocracy or foreign domination or whether he mostly just inspired those who came later. Further, after lingering overly long on Choephel's time in India, especially his penchant for prostitutes, Schaedler rushes through the events leading up to his release from prison and the final year of his life. However, despite all that's lacking, Schaedler does manage to round up an engaging group of interviewees from among Choephel's surviving contemporaries and exiled Tibetan intellectuals who collectively challenge the standard Western understanding of Tibetan politics.

Presentation
Video & Audio:
Shot on mini-DV, this release is presented in unenhanced letterbox (1.85:1 aspect ratio) with burnt in English subtitles and 2.0 DD audio. Video quality is average for a documentary of this kind. The image is interlaced and suffers mild color blooming, but colors levels are otherwise accurate, and detail is adequate. 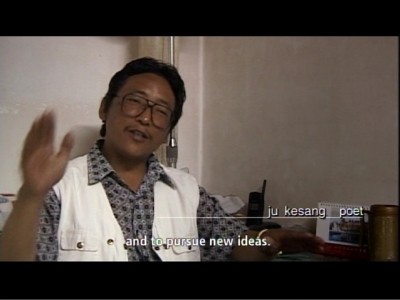 The 2.0 DD has no noticeable separation between channels, but dialogue is clear, levels are consistent, and there are no noticeable dropouts or distortion.

Extras:
The paltry extras consist of six pages of onscreen text (four with director Luc Schaedler and two of extracts of Choephel's writings), and a trailer for Dreaming Lhasa. No trailer for this release is provided.

Final Thoughts:
Viewers keenly interested in the question of Tibetan autonomy from China will wish to see Angry Monk: Reflections on Tibet for its presentation of an alternative to the standard dichotomy between secular Chinese domination or homegrown Buddhist theocracy, and for its engaging assortment of interviewees, especially those drawn from the community of exiled Tibetan intellectuals. However, filmmaker Luc Schaedler's limited engagement with his subject's writings and uneven recounting of his biography adds up to a less than compelling whole which won't much appeal to a broader audience.