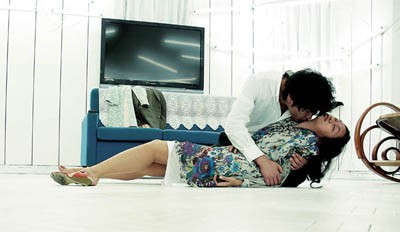 Last year, Sweden's Let the Right One In was the surprise hit of both the foreign and horror movie circuits, its uniquely creepy take on the kiddie vampire genre proving stories about young bloodsuckers need not be all angst and puppy love. On the other end of the spectrum, but working some of the same territory, is Park Chan-wook's Thirst. It's a grown-up vampire feature, and it seems the Old Boy director is out to prove that you can be a high school graduate and still grow fangs. Thirst wants us to see that there is more to the carnal desires of being a flesheater than just wondering who might take you to prom. It's a challenge Chan-wook takes on with a noble determination, though his success in this Korean-language flick is mixed.

Song Kang-ho, previously seen in Park Chan-wook's Joint Security Area and Sympathy for Mr. Vengeance, as well as the monster movie The Host, plays a hospital priest named Sang-hyun. Given the nature of his assignment, Sang-hyun has come to believe that science is an extension of God's master plan, a gift he has given to humans to aid us in maintaining our Earthly health. This idea that man does not survive by prayer alone means Sang-hyun is troubled by the patients that current medical standards cannot save. In order to speed up the research process, he submits to an experimental procedure to be a test subject for a vaccine to stop a progressive, debilitating virus. 499 men have died in the study, but Sang-hyun is determined. Grimly so.

As luck would have it, 500 is the charm, and Sang-hyun survives the experiment. No one is sure why, though the holy man gets an inkling when sunlight starts to burn his skin and he develops a craving for blood. From what he can figure out, he received a transfusion of blood that had come from a vampire while on the operating table, and the healing powers of Nosferatu keep the virus at bay--but only as long as he continually replenishes and drinks of others. Seen as a saint by ailing patients and their friends and family, Sang-hyun wrestles with the religious implications of his transformation and finding nonviolent ways to satiate his thirst.

One such believer is Lady Ra (Kim Hae-sook), whose son Kang-woo (Shin Ha-kyun) is dying of cancer. Sang-hyun prays for him, and Kang-woo's disease largely disappears--though, he is such a bundle of illness, constantly shivering and with an unstoppable runny nose, one can't really be sure he was ever dying at all. Regardless, this encounter is actually a reunion, as Sang-hyun knew this family from his old neighborhood. He starts joining them for mahjong night, and he becomes reacquainted with their adopted daughter/sister, and now Kang-woo's wife, Tae-ju (Kim Ok-vin, soon to be seen in Lee Je-yong's Actresses). A childhood crush redevelops. Tae-ju has grown into a beautiful young woman, but she is essentially an indentured servant for Lady Ra. This awakens more desires for the vampire priest to wrestle with, and his obsession turns dark when it's revealed that Kang-woo may be abusing Tae-ju. A plot goes into gear to free her from her prison, and release Sang-hyun from the binding of Catholicism so he can indulge his passions in full. 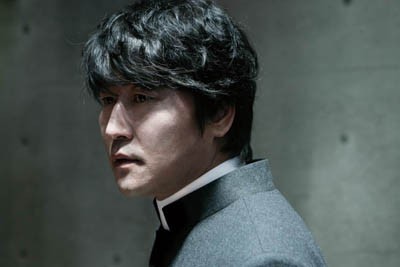 There is a lot of heavy thinking in Thirst. Park Chan-wook essentially ties all human desire, be it the need for divine salvation and a belief in a power greater than us or basic horniness, into the vampire metaphor. All of these things are no different than a vamp's need for blood. Once you give in to an impulse, once you decide something is a "solution," it becomes an addiction, a compulsion, a need that must constantly be refilled. Yet, the selfishness of said acts can lead to madness, sometimes manifesting as religious fervor, sometimes as the drive to constantly have more. Once Tae-ju and Sang-hyun are together, they become trapped in an old-school potboiler, bound together by their secrets, driven mad by their guilt. In some of Thirst's best sequences, their sins return from a watery grave to haunt them, and the way Chan-wook handles it is delightfully disturbing.

Unfortunately, for as good as much of Thirst is and for as intriguing as a lot of the ideas are, the script is too heavy with ambition. At 133 minutes, the movie is too long, it is paced too slow, and there seems to be some confusion as to what is important. Many inconsequential scenes could have been cut. For instance, once the couple is together, we see Tae-ju cheat on Sang-hyun; yet no comment is made on her infidelity, it never becomes part of the plot, so why is it there? There are many such stray details, little moments that Chan-wook never develops, and they only bog Thirst down. Ironically, however, had the director applied the same quick pacing to a lot of the other sequences, he'd have a movie that would be a lot less boring while being no less deep. The slow crawl of seduction seems to go on forever despite the inevitability of the destination. Do we really need to see that many mahjong games? Thirst could have done with more lively scenes like the one where Sang-hyun demonstrates his powers to his new love by leaping from rooftops (think the way Spider-Man shows his web skills to Mary Jane) and less of these two sitting around and feeling sorry for themselves. It's one of the few times where the movie's tone aligns properly with Park Chan-wook's stunning visual sense. The movie is gorgeous even when it's tedious, juxtaposing the static world of mortals with the ungrounded existence of the undead by jumping between very straight compositions and unmoored, fluid crane shots.

Chan-wook co-wrote the script with Jeong Seo-gyeong, his collaborator on his most recent films, and I'm a little surprised to discover that Thirst is based on an Emile Zola novel called Therese Raquin. A quick look at a summary of that 1863 novel (ten years later, it was also turned into a play) reveals that they largely took Tae-ju's story and her subsequent affair from Zola, the Catholicism and the vampires are what they added to the narrative. I guess this just confirms that maybe Chan-wook bit off more than he could chew and let his ambition get the better of him (another irony, given the message of the movie; plot details are like blood for storytellers!). Really, the movie's best section is the early sexual relationship between the girl and vamp and all the consequences that come tumbling after.

Song Kang-ho is solid as the overly serious, pensive priest. He's a reliable actor, and he never fails to deliver an excellent performance (I still love him best in Bong Joon-ho's Memories of Murder). He's only second fiddle, though, the movie really belongs to Kim Ok-vin. As Tae-ju, she begins as meek and troubled, but she slowly reveals herself as a scheming femme fatale who, when she is unleashed, is sexually potent and daringly alluring. She saves the back half of the film, where the increased seriousness of the vampire--whom she needles by continually calling "Father" despite his having renounced his priestly collar--starts to bog Thirst down. Kang-ho maybe should have studied a little more of Fred MacMurray's performance in Double Indemnity to see how a man can learn the folly of his own obsession and take action without being too big a philosophical lump.

Thirst's imperfections aren't enough to make me dissuade you from seeing it, but I would say prepare for some bathroom breaks. When the movie starts to feel like it's stretching, it probably is, and that's a good time to make a run for the toilets. If the chewy, thought-provoking ideas had been better melded to the more lurid and involving aspects of the plot, Thirst would have been a real winner; instead, it's a muddled good effort, worth a look. An adult vampire movie with adult concerns doesn't mean it needed to be as boring as adults often can be. In fact, Thirst is at its best when its characters aren't being so grown-up and serious. I mean, really, what's the point of living forever if you don't go for a few youthful indulgences? 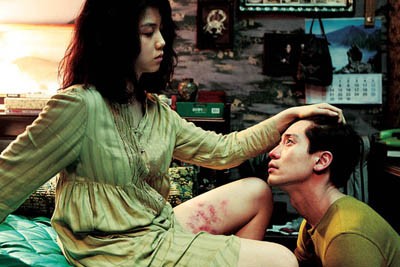