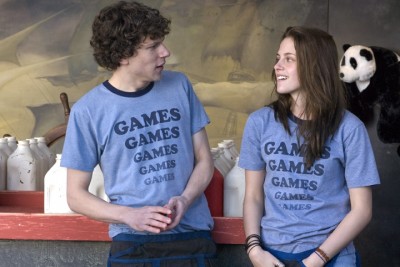 I'm positive "Adventureland" had a breathtaking original screenplay. The finished product hints at the magnificence of a layered, nuanced piece of writing that captures the bewildered minimum-wage happenings a cluster of young people encounter on their way to the finality of adulthood; however, very little of that character shading and dramatic ambition survived the brutal journey to the screen. It's fantastic to observe "Adventureland" reach out and seek a timeless youthful uprising feel, but the film's eventual realization is a crushing disappointment.

As his last year of college winds down, James (Jesse Eisenberg) dreams of a summer in Europe to expand his horizons. With the money tight at home, James is forced to take a job at Adventureland, Pittsburgh's worst theme park, run with questionable safety and food preparation requirements by Bobby (Bill Hader, joined by Kristen Wiig). Loathing the work, James takes comfort in the sarcastic employee camaraderie (including Martin Starr and Margarita Levieva), turning a romantic eye toward the reclusive Em (Kristen Stewart). While the summer drones on and pot and booze are consumed daily to drown out the prickly park guests, James tries to make sense of Em's mounting troubles and his own budding desires, leading him to accept advice from the park's lothario handyman, Mike (Ryan Reynolds).

"Adventureland" resembles a haphazardly stitched together movie that was forced to make sense of hours upon hours of summertime blues footage and various intricate subplots. I won't go so far as to brand the film a mess, but considering the filmmaking proficiency that director Greg Mottola demonstrated before with "The Daytrippers" and "Superbad," his inability to juggle the emotional infrastructure of "Adventureland" is a disappointment. 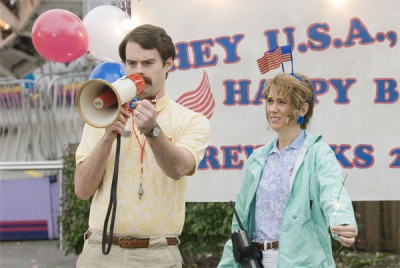 The idea of "Adventureland" is to step back in time to a place of virginal worry; the last year of passable adolescence before the hammer falls and maturity comes crashing in. The curious, wandering cinematography symbolizing the last gasp of social indifference is Mottola's greatest accomplishment, capturing the Pittsburgh malaise and substance-fueled mischief, buoyed by a flood of on-the-nose 80's alternative and pop hits. If there's one lasting impression to be made by the film, it's clearly that Mottola had the time of his life picking out the tunes, one of which actually makes it into the framework of the story as a running gag.

Where "Adventureland" lost me is in the sheer number of stories it wants to tell. Finding the whole park crew interesting, the film leaps around trying to maintain worthy arcs for the actors. With limited time to digest James's multifaceted aches, taking focus away from the character weakens the ultimate invitation of the story: to observe his accelerated cognizance. Instead, the gang bombs around the park pulling pranks and trading smooches, but nothing gels as the coming-of-age event the script is reaching for. Mottola doesn't even show much interest in the park itself, refusing to let the viewer savor the bigger picture of dilapidation and carny swindle, only showing the grounds in frustrating fragments.

Any enjoyment or basic investment I pulled from the film arrived in the brittle shards of behavior from the cast, who do the best they can with the uneasy dramedy tone of the piece, though a few actors, namely Stewart and Eisenberg, fail to break the tiresome acting bells and whistles that have come to define their careers. Still, there are a few gem performances to be hoarded here, spotlighted within any depiction of workplace rumormongering and vocational frustration. 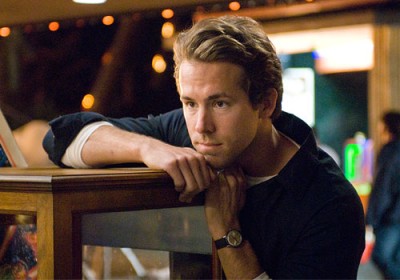 The AVC encoded image for "Adventureland" (1.85:1 aspect ratio) offers a startling amount of life. Colors are universally appealing and crisp, creating agreeable atmosphere for the domestic disturbances of the movie and the Adventureland sequences. The theme park scenes are undoubtedly the highlights of the presentation, allowing the BD to parade solid work with neon-filled carnival lighting and superb character detail. Shadow detail has some difficulty coming out to play, often swallowed by low-light sequences or thick heads of hair. Grain shows up here and there, but never disrupts the mood.

It's all about the music. The 5.1 DTS-HD sound mix on the BD is stellar with juicy soundtrack cuts, offering the crunchy, synthy tunes a proper presentation, with subtle LFE response and overall warm, inviting fidelity. Dialogue is adequately separated from the music, kept fresh and available. I also enjoyed the Adventureland ambiance in the surrounds, adding to the experience of the picture with faint ride mechanics and guest chatter. A French 5.1 Dolby Digital mix is also included.

The feature-length audio commentary from writer/director Greg Mottola and actor Jesse Eisenberg gets off to a rocky start with the duo in full-on joke mode, hoping to crack up the room with their gentle purple-nurpling of info track clichés. The pair never truly flushes away their impish behavior, but the track eventually grows up and attempts to impart some real information about the creation of "Adventureland." When Eisenberg prompts Mottola with questions, it's a joy to hear the filmmaker express his concerns and desires for the screenplay, where he fretted over how he could make a poignant film out of what was essentially a grab bag of memories from his teen years. There's also plenty of discussion about the soundtrack choices (the BD even includes a "Song Selection" function for the movie's 30 tunes) and Mottola's cinematic inspirations (he was grateful for Ron Howard set visits). The guys get caught up in a quip coma too easily, but once the humor is dropped, the track becomes enlightening and worth the trouble.

"Just My Life: The Making of 'Adventureland'" (16:31) is the EPK addition to the BD, though executed with a sense of humor and a few surprises. Cast and crew interviews are unfortunately conducted on-set, but still offer some insight to the movie and a couple of giggles, most courtesy of Hader and Wiig, who goof around during their segments. BTS footage is appealing, but the rest of the featurette is more promotional than reflective.

"Deleted Scenes" (2:27) are tiny slivers of character and comedy, including a sincere exchange of panic between Mike and James. They can be viewed with or without commentary from Mottola and Eisenberg.

"Frigo's Taps" (2:34) is a guide on how to perfectly whack sensitive genital areas, hosted by actor Matt Bush. Following Bush around the set as he details the myriad of ways to slap midsections, the featurette quickly starts to resemble a YouTube video as actors and crew are subjected to the crotch punches. It's funnier than I make it sound.

"Welcome to Adventureland" (1:21) is a pair of faux commercials highlighting the promotion of the park, created with mid-80's video technology. Goofy, but fun.

"Employee Orientation Video" (3:34) is a second stab at retro video production, this time showing off the ins and outs of Adventureland employment. A bit more strained, but still worth a look.

"Drug Policy" (:44) is the last of the gag videos, this time taking a comical snapshot of Adventureland's unconvincing chemical guidelines.

With the diverse cast, golden growing pain era, and an appetizing plot of consistent heartbreak, I wanted to treasure "Adventureland" for the film it was aspiring to be. Instead, I was distracted by an episodic feature that holds little focus where it counts the most and remains free of genuine gravitas, even with a Replacements-heavy soundtrack around to purchase some credibility.