Last Days of Disco, The

The Criterion Collection // R // August 25, 2009
List Price: $39.98 [Buy now and save at Amazon]
Review by Chris Neilson | posted August 25, 2009 | E-mail the Author
Released in 1998, The Last Days of Disco was the final film in writer-director Whit Stillman's loose trilogy of satirical social comedies about the so-called "Urban Haute Bourgeoisie" (UHB), a sub-culture of young, white, East-Coast, Ivy-league elites. Stillman's characters are as wordy as any Woody Allen has written and are as observant as those created by Larry David and Jerry Seinfeld, but they're far more brittlely class conscious. Well-educated and urbane, but also young, naïve and insular, these characters, with their carefully-fabricated and rehearsed bons mots, are fascinating to watch. 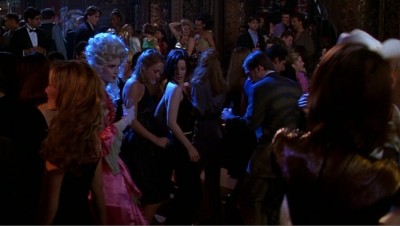 Set in "The Very Early 80s", one might easily imagine that the characters of The Last Days of Disco are the younger siblings of the UHB's of Stillman's first film Metropolitan (1990), a few years older and finally coming into their own. Being seen at the club, an unnamed but decidedly Studio-54-like discothèque, is as important for these twentysomethings as the débutante balls were to the characters of Metropolitan in some unspecified yesteryear.

Alice (Chloe Sevigny) and Charlotte (Kate Beckinsdale) are liberal arts grads fresh from Hampshire employed as assistant editors at a Manhattan publishing house, getting by on low wages thanks to continued financial support from their fathers pending landing promotions or husbands. The men in this circle include Des (Chris Eigeman), an assistant manager at the club, Des' best friend Jimmy (Mackenzie Astin), a junior ad executive whose job depends on getting his firm's clients into the club, Des' college pal Josh (Mathew Keeslar), a freshly-minted assistant district attorney, and Tom (Robert Sean Leonard), an environmental lawyer. 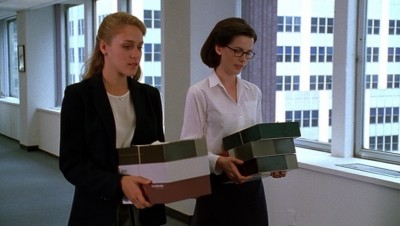 The principal concerns of the characters revolve around getting into the club and pairing off, added to this is a poorly-conceived seemingly-last-minute plotline about tax evasion which is best ignored by the viewer as much as possible. Fortunately this rather thin plot is dispensable window-dressing. At heart, The Last Days of Disco isn't really about dancing, fornicating, or tax dodging. It's really about providing the characters with opportunities to exchange clever observations about subjects ranging from whether yuppies actually exist, to the homosexual appeal of Mutual of Omaha's Wild Kindgom's Jim Fowler, to the social benefits of gonorrhea, to whether Shakespeare's "To thine own self be true" is sound advice, to what it takes to succeed in publishing, to whether classic animated Disney films spawned the modern environmental movement and programmed women to fall for cads.

As evidenced by the extensive film soundtrack, large number of extras, and period-staged locations, Stillman had considerably more money to make The Last Days of Disco than he had for Metropolitan, yet it isn't nearly as good. Metropolitan, like Louis Malle's My Dinner with Andre or Tom Noonan's What Happened Was... actually benefits from the minimalism imposed by the confined sets and lack of extras. On the other hand, in The Last Days of Disco, the intensity of the ensemble performances are somewhat dissipated by the large sets, numerous extras and frequent music.

Though Stillman always seems to be on the verge of some new project, most recently a screen adaptation of satirist Christopher Buckley's novel Little Green Men, he hasn't completed a film since The Last Days of Disco more than a decade ago, but thanks to this release from Criterion all his films are again available for the North American home video market, at least.

Presentation
Video & Audio
Last Days of Disco is presented anamorphically in its original 1.78:1 aspect ratio. The transfer is so good that I wonder why Criterion did not release this title on Blu-ray as well. Objects often seem to pop off the screen looking practically 3-D and colors are vivid.

The 5.1 DD audio mix is excellent without being overdone. Dialogue is typically front and center, music to the rear, and ambient noise minimal. Optional English subtitles are appropriately sized, paced, and placed.

Extras:
Criterion has mustered just enough extras to warrant the $39.95 MSRP price point. Foremost is an audio commentary with filmmaker Whit Stillman and actors Chloe Sevigny and Chris Eigeman, recorded in 2009 specifically for this release, in which the trio are unreserved and funny. Also included are four deleted scenes with optional audio commentary by Stillman, Sevigny, and Eigeman (8 min.), a vintage behind-the-scenes featurette (6 min.), an audio excerpt of Stillman reading from his film novelization The Last Days of Disco, with Cocktails at Petrossian Afterwards, a stills gallery, the original theatrical trailer, and a foldout booklet with an essay by David Schickler.

Final Thoughts:
Continuing in the tradition of Metropolitan (1990) and Barcelona (1994), filmmaker Whit Stillman's Last Days of Disco (1998) crafted a poignant ensemble comedy of manners about New York's privileged young elite. Though weakened by a poor plotline about tax evasion and almost overwhelmed by sets, extras, and music out of proportion to all need, The Last Days of Disco is highly recommended to anybody that enjoys their comedy dry and urbane.