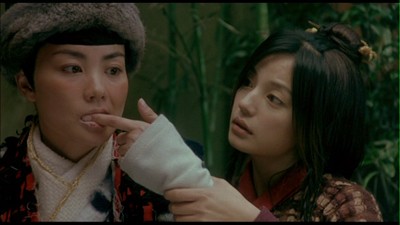 Princess Wushuang (Faye Wong, Chungking Express) and Emperor Zheng De (Chen Chang, Crouching Tiger, Hidden Dragon) are the Royal children of the Ming Dynasty, the descendents of the Empress Dowager (Rebecca Pan, In the Mood for Love), who still rules over the land. Not content with courtly existence, the heirs apparent regularly make escape attempts in hopes of breaking out of the palace and seeing life in the real world. At the start of Chinese Odyssey 2002, Wushuang is finally successful, using the distraction of her brother's capture and her Iron Headbutt martial arts technique to bust through the gate of the Forbidden City. Disguising herself as a man, she heads to a nearby village, where she is taken in by Bully the Kid (Tony Leung, Faye Wong's Chungking Express and 2046 co-star), a local thug and restaurateur who thinks he may have found a husband for his sister. Phoenix (Wei Zhao, Shaolin Soccer) has not yet found love thanks to her tomboy style and also the local fear of her brother. Believing he has a psychic bond with her, Bully knows this makes her heart ache.

Except there is no psychic bond. As we discover in voiceover, the deep thoughts Bully believes his sister is having are far more trivial when the audience is allowed to eavesdrop on them. He thinks she is transmitting feelings of deep yearning, she is wondering why he hasn't washed his face. It's a silly joke, and indicative of the kind of broad slapstick style that makes Chinese Odyssey 2002 a lot of fun. Directed by Jeffrey Lau, who also helmed two unrelated Chinese Odyssey movies with Stephen Chow and has a new movie called Kung-Fu Cyborg, wrote and directed this over-the-top send-up of arty wuxia pictures, recreating them for laughs but employing the same exacting (and often very pretty) art direction. Lau mimics and mocks such big budget kung-fu flicks as Hero and Ashes of Time, playing up the metaphysical themes, superpowers, and convoluted plotting. The latter reference is especially pointed, as Lau places Tony Leung in similar shots and situations as ones from Wong Kar-Wai's puzzling deconstruction of the genre. Fittingly, Kar-Wai is a producer on Chinese Odyssey 2002, and he takes his lumps with dignity. References to 2046 and Days of Being Wild pass with a wink, and Lau and cinematographer Peter Ngor (Sex and Zen)) play on Kar-Wai's slow-mo style, as well. The jabs are lovingly thrown; in fact, this isn't the first time the director and producer teamed up for this kind of jokefest. In 1993, Kar-Wai produced Eagle Shooting Heroes, Lau's alternate adaptation of the same Louis Cha books that spawned Ashes of Time.

What a difference a decade makes, though. Where I found the slapstick of Eagle Shooting Heroes to be overdone and flat, I found the similarly styled comedy of Chinese Odyssey 2002 to be delightful. A far more sophisticated hand guides us into a script that has much more going on than just an unmannered grasping for yucks. 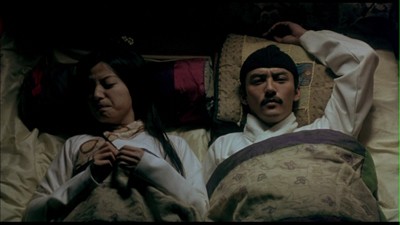 Once Princess Wushuang gets to the city and we get through the neo-Shakespearean gender-bending set-ups and gags--in one scene, Phoenix, Wushuang, and Bully all cross-dress together, with the other two never realizing that Wushuang is actually revealing her true self--a tender romance starts to develop for real. Bully is drawn to the Princess, mistaking genuine affection for the residue of his perceived sibling bond. When Wushuang is taken back to the palace, she leaves her new friends believing that she is the actual Emperor, allowing them to then be caught unaware when Zheng De comes to town disguised as an actor and inventor who dreams up anachronistic objects like platform shoes and afro wigs. Phoenix falls for the rapscallion, not knowing that to love him fulfills her misconstrued betrothal to the Emperor rather than betraying the person she thought was said Emperor. Sure, it sounds confusing on paper, but trust me, the movie flows along just fine.

Though Zheng De is able to pull rank on his mother and insist Phoenix is the woman for him, Wushuang and Bully aren't so lucky. A superstitious ritual gives the Empress reason to dismiss Bully, who suffered a similar rejection in the past. It's another very Wong Kar-Wai-like subplot, and the movie requires an equally Kar-Wai solution. Things actually get a little heavy as the Princess goes mad and Bully must learn to stop being a Kid and become a man, and the whole theme of switching roles finally pays off in a big romantic way. Of course, what more can you expect from a movie that has Romance itself personified in a metamorphosing rabbit named Solid Gold Love (played by Athena Chu, herself named for a goddess of love)?

It's a surprising turn of events for a film that set itself up as a mere parody of period-piece martial arts dramas--complete with its own well-choreographed action scenes. (I particularly liked the Emperor's fighting style that allows him to draw power from flirting.) Chinese Odyssey 2002, like its many characters, only begins by presenting itself one way in order to have more impact when it throws off its disguise. Though the comedy may be too goofy for some, the love story gives it a good balance. It's light fare, but it's got heart.

It's also got Tony Leung and Faye Wong, a reteaming that should be enough for all the Chungking Express fans out there to give Chinese Odyssey 2002 a look. They are both quite good at comedy, and they are also both gorgeous, which isn't such a bad thing in a film where you are rooting for the two leads to eventually make kissy faces. The scene where they are reunited is as tender as the other scenes are ridiculous, and the exchanges that pass between them are wonderful.

I suppose on one side it's arguable that this film has something for everyone--comedy, action, romance, good acting, a vibrant visual style--but as a bit of fair warning, you should know it's also very much rooted in cultural and cinematic traditions that may not be to everyone's tastes or even completely recognizable. Still, if you enjoyed House of Flying Daggers or maybe even Hot Shots back in the day, there should at least be some access points for you. If you've seen your fair amount of Chinese period pieces or just dig Hong Kong cinema in general, enter safely. 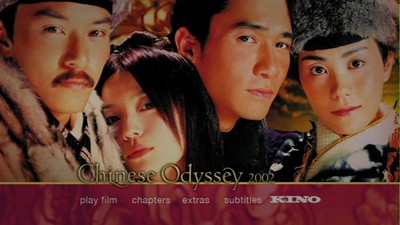 Video:
Chinese Odyssey 2002 has a 1.85:1 anamorphic transfer that preserves the original aspect ratio of the movie's theatrical release. The image is of decent quality with very little noticeable dirt or grime. If I had any complaints about the look of the DVD, it's that the image was a bit soft at times, and the colors muted. There was also some interlacing.

I can live with the picture quality on the disc, but I do have a major complaint about the cut of the movie on this DVD. The original running time for Chinese Odyssey 2002 is 97 minutes, and the version on this Kino disc is only 90 minutes. Since I own an all-region Chinese import released by Mei Ah in 2002, I was able to confirm that the native cut is indeed longer. While I am not entirely positive of the full extent of the trims, there is at least one substantial deletion from the beginning of the film. Before Bully the Kid returns home, we see him on a battlefield engaging in a public rumble with some other brigands before it is shut down by the cops. While this is not so essential that I noticed it missing when rewatching the movie all these years later, I also don't see the purpose in cutting it.

From what I can tell, this may be an international cut that is also on the Tartan region 2 DVD released in 2005. Looking around for some info, I did find one source that gave the running time of that edition as 86 minutes and suggested there was a 4% speed-up in the PAL conversion. 4% would be consistent with 4 minutes lost from a 90 minute cut, not 11 minutes from a 97-minute cut.

Sound:
This Kino disc comes with a simple 2.0 mix in Cantonese, which would be consistent with the Hong Kong version of the film. (There is also a Mandarin dub for mainland China that is not included here, but it is on the Mei Ah release, where both tracks are mixed in 5.1.) The soundtrack is of good quality, with fine tones and no extraneous noise. The subtitles are very well done, including witty puns and careful translations of the songs.

Extras:
Not much, just a Chinese theatrical trailer and a stills gallery featuring production and promo photos.

FINAL THOUGHTS:
I'm on the fence about how strongly to encourage people in terms of seeking out Chinese Odyssey 2002. While I definitely want to recommend the movie, I almost want to suggest that you rent the U.S. edition and then seek out the Chinese version for ownership. Still, all things being equal, and even missing seven minutes of footage, I really like Chinese Odyssey 2002's mix of martial arts parody with heartfelt period romance. Faye Wong and Tony Leung lead an excellent cast through slapstick comedy and cool action sequences toward a more complex emotional climax than anyone should be rightfully expecting. It's also gorgeously shot, something that gets a little muted on this disc. Still, know those caveats, and Chinese Odyssey 2002 is reservedly Recommended. 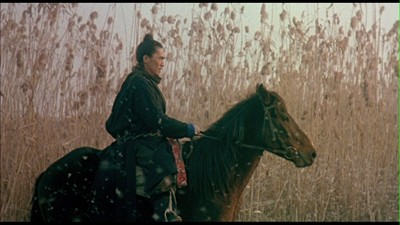