Doctor Who: The Rescue / The Romans

BBC Worldwide // Unrated // July 7, 2009
List Price: $34.98 [Buy now and save at Amazon]
Review by Stuart Galbraith IV | posted August 28, 2009 | E-mail the Author
An intelligent pairing of two highly satisfying, consecutive stories and packed with the usual bounty of thoughtful, slickly-produced extra features, Doctor Who - The Rescue / The Romans is a real treat for fans of the First Doctor, played by William Hartnell, and that era's largely contrasting approach to the Doctor Who series of the 1970s and beyond. First broadcast during January and February 1965, the two stories, with two and four episodes respectively, came early in Doctor Who's second season/series, sandwiched between two stories already out on DVD: The Dalek Invasion of Earth and The Web Planet. 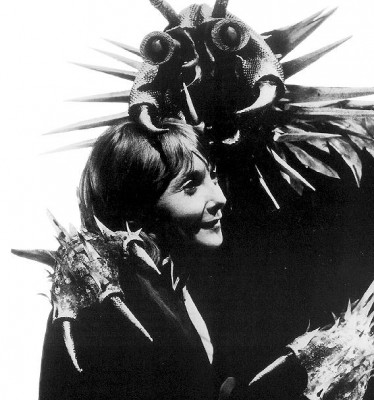 Although The Rescue was mainly intended to introduce a new companion for the time-traveling Doctor (Hatnell) and his friends Ian Chesterton (William Russell) and Barbara (Jacqueline Hill), high school teachers from present-day Earth, the two-part story is quite strong on its own terms. Dripping in foreboding atmosphere, it features a smart, if somewhat predictable climax and resolution.

The two live in abject fear of native creature Koquillion (Sydney Wilson), who immediately attacks Barbara and later traps the Doctor and Ian in a massive cave. The Doctor finds the creatures aggressiveness strange; he had visited the planet some time before, and found the race utterly peaceful and highly intelligent.

The Rescue is a neat little story, compact and with its excellent set design (half-destroyed spaceship interior, evocative caverns and ghostly ruins of an ancient civilization), it is highly atmospheric throughout. Though alert viewers can probably guess what all the mystery is leading up to pretty early on, it's dramatized well and the final payoff works thanks to David Whittiker's clever dialogue.

Undeniably, the story is a showcase for both new companion Vicki and the actress who plays her, Maureen O'Brien; her emotions run the gamut from sorrow to elation, and the actress is up to the showy part. 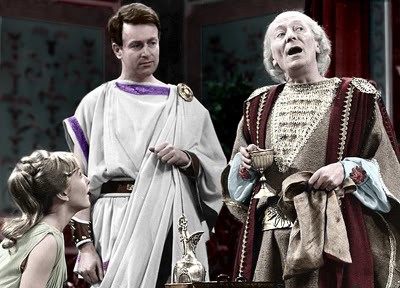 In the four-part The Romans, the Doctor, Ian, and Barbara, now joined by Vicki, travel to Ancient Rome during the reign of Nero, for what's intended as a relaxing break. Instead, slave traders kidnap Ian and Barbara while the Doctor, mistaken for famous lyre player Maximus Pettulian, is escorted to the palace to perform before Nero (Derek Francis).

The Romans was unusual in several respects. As a series, Doctor Who was originally conceived with educational historical stories interspersed with the overtly fantasy ones, though after Hartnell left the series in 1966 historical storylines became extremely rare; fans preferred adventures set on other planets featuring monsters and futuristic technology.

The Romans is also unusual for its darkly humorous tone. Nero, who spends much of the story chasing household slave Barbara around the palace, is something of a devilish madman with buffoonish qualities, much like Charles Laughton's and Peter Ustinov's interpretations of Nero in The Sign of the Cross and Quo Vadis, respectively, while the Doctor is unaccountably fey and giddy throughout the story. (Part of the fun of this episode is seeing how the confident but non-musical Doctor will avoid having to play the lyre.) This is contrasted by fairly grim scenes of Ian toiling away on a Roman galley ship and later threatened with man-eating lions as a gladiator fighting in the Coliseum.

Such epicness gives The Romans the ambitions of Spartacus on a shoestring, or maybe Quis crumens? ("What Budget?") A behind-the-scenes documentary reveals the show made do with an appallingly low set budget of just £400 per episode, and while a few of these don't come off - Ian and another gladiator-slave fight to the death in what looks like a children's sandbox - those willing to suspend their disbelief will not be disappointed.

Indeed, one of the things I like very much about the William Hartnell-era Doctor Who is how producer Verity Lambert seemed willing and eager to attempt the most dauntingly ambitious story material, and how her art directors, set decorators, and effects people do such a great job creating large-scale environments mainly through suggestion - i.e., hint at a passageway, a large cavernous ruin, a spaceship interior, and the like in much the same manner as was achieved during the glory days of radio drama. In other words, let the audience's imagination do the rest. It's the antithesis of show-me-everything-and-then-some CGI showiness, but I found it hugely effective on both shows here.

The Rescue / The Romans is presented on two discs: Disc One includes the two-part The Rescue and all its extra features, while Disc Two features the four part The Romans and its accompanying supplements. The episodes run a grand total of 146 minutes and look good considering they were shot on primitive B&W videotape 45 years ago. Optional English subtitles are available, including on all the extra features.

As they have reliably done in the past, 2|Entertain and BBC Video have crammed this release with lots of entertaining and highly informative supplements which make this already desirable release much more so. Both stories include audio commentary tracks: "The Rescue" is moderated by Toby Hadoke and features actor William Russell, director Christopher Barry, and designer Raymond Cusick. "The Romans" features Hadoke, Russell, Barry, and they're joined by actors Nick Evans and Barry Jackson. Though a bit meandering at times there's also a lot of good humor and insight into the production of these episodes and the personalities involved.

"Mounting the Rescue" and "What Has 'The Romans' Ever Done for Us?" are 21- and 34-minute making-of documentaries, both in 16:9 enhanced widescreen format, as are most of the documentaries. Both are excellent, with on-camera interviews of the programs' survivors with much rare footage and photographs. The latter expands its coverage to include the participation of historians who discuss the latter show's fidelity to the real Ancient Rome, while Christopher Biggins, who played Nero in I, Claudius, and Anthony Andrews, Nero in A.D., appear on-camera to discuss the character. A brief "Roma Parva" discusses the set design, while the self-explanatory "Dennis Spooner - Wanna Write a Television Series?" talks about "The Romans" scribe. A segment from the series Blue Peter discusses the traditional Roman banquet.

The too short but very good "Girls! Girls! Girls! The 1960s" gives viewers a run-down of all the series' leading and supporting female characters, and almost all of those still around appear on camera to discuss their roles, including the apparently ageless Jean Marsh. (Maybe she's going to turn out to be a robot after all, just like that Twilight Zone episode.) A photo gallery and PDF features (including more set designs and Radio Times listings) round out the extra features.

The Rescue / The Romans are two delightful stories, and the dam burst of intelligently organized extra features only adds to the fun. If you are a classic Doctor Who fan this is a must, and even if you're new to the series, this set isn't a bad introduction to the long-running series. Highly Recommended.