Simpsons: The Twelfth Season, The 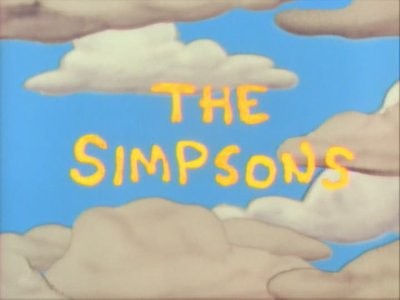 To trace the perceived decline of The Simpsons would be redundant and, in my opinion, trivial. There's nothing original in the suggestion that The Simpsons started a steady downward spiral sometime around its tenth season. (Some would posit that the show's decline had an earlier start.) Since then, dedicated fans of the show have raised their voices in a persistent, whining chorus of disapproval. I myself stopped watching the show sometime during the twelfth season. There was nothing acrimonious or indignant about my attitude toward the show - the way I saw it, The Simpsons had provided me with nine or ten seasons of some of the best and most memorable comedy ever broadcast. Without thinking too much about it, I simply stopped watching - perfectly satisfied with the DVD sets that were just then starting to be released. I happily relived all the great moments digitally, and for the last nine years, have seen only a small handful of new episodes. (Although The Simpsons Movie is entertaining and has hilarious moments, it did not capture the charm and sophistication of the show at its peak.)

Watching The Simpsons: The Twelfth Season was a minor revelation. I was expecting to feel like I was entering the doldrums - the sense of past excellence giving way to repetitive mediocrity, a greater reliance on shock gags, and less satirical content. This is the sense I've had of the show in the few episodes I've seen over the intervening nine years. But Season 12 is not bad. Maybe it's the passage of time. Maybe I've changed somehow. Whatever the situation, Season 12, while not the best in the show's history, has many very strong episodes, some fantastic conceptual experiments, and countless top-notch gags and one-liners. 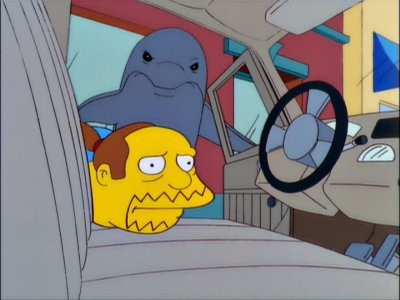 Admittedly, the season's opening episode, the annual installment of "Treehouse of Horror," is probably the weakest of that beloved sub-franchise up to that point. The usual three acts depict Homer as a ghost trying to get into heaven, an amalgamation of Grimm's fairy tales, and the hostile takeover of Springfield by vengeful dolphins. Although the latter segment is a near-classic, the first two are extremely mundane and feel like the writers are stretching for Halloween-related material. Even the dolphin segment doesn't feel "Halloween-like," even though it is perfect in other ways. The issue of the Halloween episode is minor overall, but because it is the first episode on the set, it made me brace for disappointment. 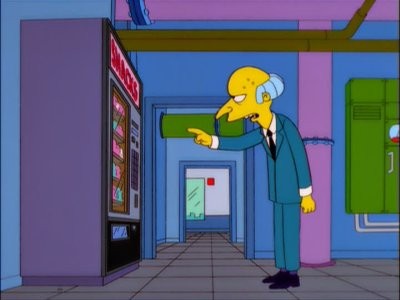 Most of the episodes that follow are wholly enjoyable, with moments of trademark Simpsons brilliance generously sprinkled throughout the season. "The Computer That Wore Menace Shoes" stands out as a smart satire of online muckraking a la Matt Drudge and transmogrifies into a bizarre but bold parody of The Prisoner. "HOMR" reveals the root of Homer's sub-normal intelligence: a crayon lodged in his brain; when it is removed, his IQ skyrockets. This episode cleverly indicts the anti-intellectual tone of American public discourse, while Homer learns to empathize with Lisa's day-to-day struggle against the forces of mediocrity. "Worst Episode Ever" focuses on Comic Book Guy for the first time in the show's history. Here, the unnamed loser take a sabbatical and ventures forth in search of social contact, while Bart and Milhouse run the comic book store in his place. There's some great stuff here, including the ridiculous comic book "Biclops," which Milhouse over-orders for the shop, not knowing that the bespectacled hero is the creation of LensCrafters.

There are also episodes that miss, and miss big. As I said before, the old Simpsons charm is present here, but it's not as thickly available as in prior seasons. In some episodes, the jokes are spread thin, or they just don't work. The weakest episode, in my opinion, is "Simpsons Tall Tales." With the exception of most installments of "Treehouse of Horror," the anthology episodes of The Simpsons don't work for me. Straight parody and jokes based on cultural references are easier than character-driven situational humor. It's understandable that after eleven years, a show might have trouble continuing to come up with original material for the same five characters, but the anthology episodes come across as rather transparent attempts to avoid that challenge.

In the end, The Simpsons: The Twelfth Season contains more than its fair share of laughs, while generally maintaining the show's creative integrity. Although far from the series' strongest season, taken on its own, it still compares favorably to most other comedy programs past and present.

Gracing the front cover of the slipcase is the corpulent head of Comic Book Guy; his presence dictates the "Bi-Mon-Sci-Fi-Con" theme of the interior packaging, with the show's cast of characters at a big Comic Con-like extravaganza. The packaging of this set is similar to that of Season 11, except that the discs are easier to remove from the accordion-style fold-out sleeves thanks to the addition of cut-out thumb tabs for each disc. There has been much bitching about these new sleeves, and while they are not ideal, they cut down on the bulk of the set while allowing for some elaborate original artwork that looks pretty cool. There is also the usual well-designed booklet detailing the disc contents and extra features. 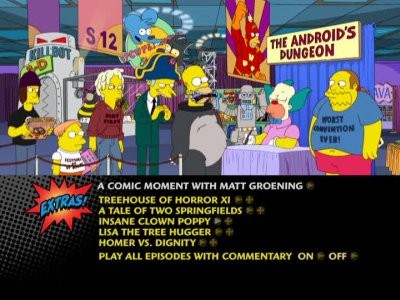 The full-screen transfer is typically bright, sharp, vibrant - very pleasing to look at. Fox almost always produces exemplary presentations of their animated properties, and this set is no exception. Colors pop, blacks are deep, images are clear and clean without being overly sharp.

Each episode is accompanied by a Dolby Digital 5.1 surround track. These are in keeping with previous Simpsons releases. The tracks are not terribly active in terms of the surrounds, but they maintain the engaging nature of the show's approach to sound, which relies mostly upon the extremely talented voice actors and the wonderful music by Alf Clausen. Sound effects are of less importance most of the time, as is appropriate with character-driven comedy. Still, the track is active and involving all-around.

Going back to the release of Season 1 in 2001, The Simpsons' DVD releases set a gold standard for extra features on TV boxed sets. That tradition continues here. Again we are treated to an embarrassment of riches. As with all previous releases, each episode is accompanied by a commentary track. On all of them, creator Matt Groening is joined by show runners, writers, animators, directors, and cast members. The commentaries on each season usually yield a guest star or two, and this time around we have Roger Daltry of The Who showing up to talk about his band's appearance on "A Tale of Two Springfields." In addition, recurring guest star Joe Mantegna (Fat Tony) joins the fun on "Insane Clown Poppy" and "Pokey Mom." These commentaries are typically chatty and filled with banter and interesting behind-the-scenes anecdotes.

Most episodes also feature optional deleted scenes accessible when a small scissors icon appears in the lower right corner of the frame. There quite a bit of deleted material. Many of these scenes are very funny and were certainly cut for time as opposed to merit. One of the most memorable features Roger Daltry cursing at Marge, so keep your eyes and ears peeled for that. (See Disc 4 below for a bit more about the deleted scenes.) 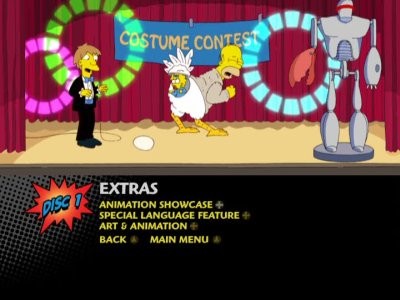 The other extras are mostly what we have come to expect from The Simpsons DVD releases. On Disc 1, we start things off with a short introductory piece called A Comic Moment with Matt Groening (1:22). An Animation Showcase allows us to watch "Treehouse of Horror XI" with picture-in-picture storyboards or animatic, with the ability to use the angle button to jump between views. The Special Language Feature offers up "Homer Vs. Dignity" dubbed in Hungarian, Portuguese, Ukrainian, or Italian. Under Art and Animation, we can view "Lisa the Tree-Hugger" with an illustrated commentary with the animators in a feature called A Bit From the Animators (13:15).

Moving on to Disc 2, Comic Book Guy: Best. Moments. Ever. (9:38) is a greatest hits compilation from the series - even extending past the twelfth season - featuring the beloved self-hating shut-in. You'll notice how Hank Azaria's vocal characterization has changed slightly over the years. There's also another A Bit From the Animators (11:36), this time discussing "HOMR" with an illustrated commentary.

Disc 3 contains only a single extra feature (aside from the episode-specific commentaries and deleted scenes), and that is another Animation Showcase, with optional picture-in-picture storyboards or animatic for "Day of the Jackanapes," an episode featuring Sideshow Bob.

Finally, Disc 4 starts off with the option to Play All Deleted Scenes (24:12) with or without commentary. This is a little longer than a full episode's worth of cut material, and as I mentioned earlier, it's quite good. The Global Fanfest (7:28) is a highlights reel from a mini-Simpsons Con that took place in 2000 on the Fox backlot. The brief snippets we are afforded here merely make us wish we had either been there, or that the entirety of the event was included here. Alf Clausen, the voice actors, and Matt Groening all make appearances. Oddly, the event was emceed by Mark Walberg, now the host of Antiques Roadshow - funny to see him here. A selection of Commercials (total 1:38) is included; seeing these characters step out of the satirical world of the show to pitch candy bars or burgers never ceases to disturb me. Under the heading Art and Animation we have a brief Sketch Gallery (0:48) and another A Bit from the Animators (11:26), this time providing an illustrated commentary for "I'm Goin' to Praiseland," although the menus don't specify the episode.

Every disc also has its share of easter eggs, but they're pretty easy to find and I don't want to ruin the pleasure of the hunt by detailing them here. In all, perusing the extras will take you much longer than simply watching every episode on the set. It's a generous assortment that should satisfy fans.

My love of The Simpsons revolves mainly around Seasons 2 through 9, or thereabouts. Subsequent seasons may not have been able to sustain the quality and density of the earlier seasons' writing. But The Simpsons: The Twelfth Season has its fair share of classic moments. This set provides solid entertainment and is of a higher and more consistent caliber than most other animated - or live-action - comedy programs. Casual fans may want to rent it, but for those who know their Simpsons, this is highly recommended.