Snow White and the Seven Dwarfs

Walt Disney Studios Home Entertainment // G // October 6, 2009
List Price: $39.99 [Buy now and save at Amazon]
Review by Stuart Galbraith IV | posted October 10, 2009 | E-mail the Author
It comes as no surprise the Blu-ray + DVD combo edition of Snow White and the Seven Dwarfs (1937) was recently selling for less than $10, about 75% off its suggested retail price. Disney can afford to be generous. Undoubtedly this is going to be one of the best-selling titles on Blu-ray thus far, just as it was on DVD and laserdisc and VHS before that and just as it will be when it debuts on media yet to be invented. No one seems to grow tired of buying it over and over again in order to watch it over and over some more.

The new three-disc "Diamond Edition" somewhat confusingly packages one standard DVD along for the ride, with everything on that disc plus a whole lot more packed onto two Blu-ray discs - one with the feature and some of the bonus material, the other with nothing but supplements. Further confusing matters, consumers can choose between DVD or Blu-ray case packaging, or they can buy the "Collector's Book Edition," which seems to come with a book in place of the standard DVD, or go premium with a "Plush Gift Set" (SRP: $79.99) or "Limited Edition Collector's Set" (SRP: $249.00).

Tucked away amidst all this unbridled commercialism is Walt Disney's charming little movie, the first and perhaps most influential animated feature of all time, a film that retains its timeless, universal appeal. More importantly for those wondering whether this latest Snow White is worth the upgrade from standard-def DVD, the answer is yes. The spotless high-definition picture belies its 72 years of reissues and remasterings; complaints that it almost looks too good to reflect its original theatrical version are not unwarranted. The truth is it probably does look better on Blu-ray than what 1937 audiences experienced: the Technicolor matrixes are in perfect alignment throughout, there's no dirt or negative scratches at all. As my colleague DVD Savant put it, this release almost looks like they pulled all the original backgrounds and cells out of storage and re-shot everything.

Extra features are of the Something-for-Everybody variety: historical featurettes for film buffs and animation fans, games for the kids, a music video and an "Exclusive Sneak Peek" and an upcoming title that might appeal to more mainstream viewers. 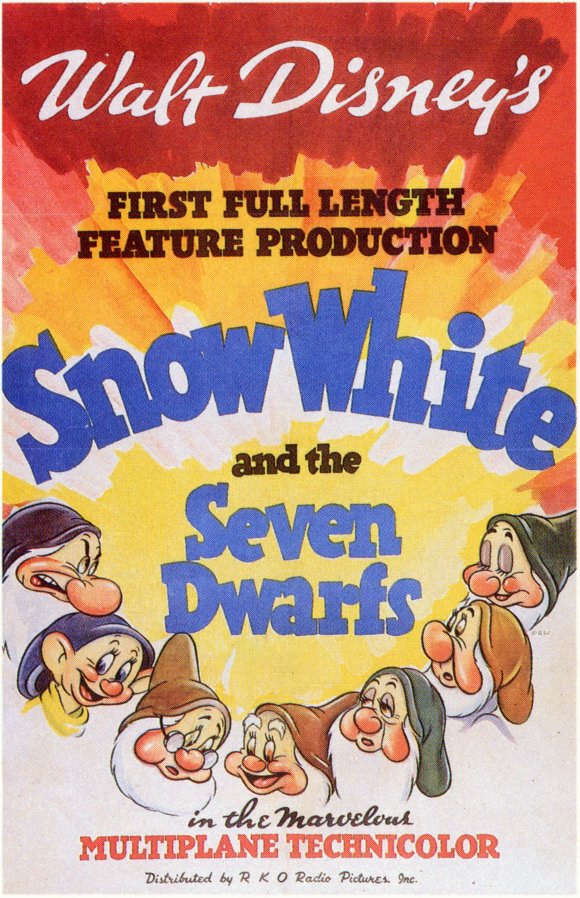 Once upon a time, a vain Queen (voiced by Lucille La Verne), forces her stepdaughter, the princess Snow White (Adriana Caselotti) to dress in rags and work as a scullery maid. Despite this, one day the Queen's magic mirror informs the Queen that no longer is her beauty without peer: Snow White has become "the fairest one of all." Cruelly, she orders a reluctant huntsman to take Snow White deep into the forest to murder her. But, unable to kill the young innocent, he spares her life and she flees deeper into the forest, where she soon befriends seven miners, dwarfs all: Doc (Roy Atwell), Grumpy (Pinto Colvig), Sneezy (Billy Gilbert), Happy (Otis Harlan), Sleepy (also Colvig), Bashful (Scotty Mattraw), and Dopey, a mute with a toddler's sensibility.

It's easy to underestimate the enormous gamble Disney took in producing Snow White and the Seven Dwarfs, the complex problems in trying to adapt a short animation factory into feature film production for the first time, and the huge impact the picture had when it was finally released.

Disney naively believed a film that ran the length of about 10 short cartoons would cost ten-times as much to produce. But what he thought could be made for $250,000 - about the cost of the average "A" picture in the middle 1930s, wound up costing $1.5 million and took nearly four years to produce. (Looking at it today, Snow White is subtly, stylistically closer to a 1934 Hollywood film than a 1937 one.) At the time, very few films had cost that much and taken that long to make.

Structurally, the film resembles the movie operettas that were popular during the early- to mid-1930s, and one can see other Hollywood influences in the things like the voices of Snow White and the singing voice of Prince Charming, which sounds rather like Allan Jones or Dick Powell. Though short on story considering its running time (84 minutes, long by 1937 standards), in terms of structure the film is nearly perfect, particularly in introducing and reprising its many classic songs.

More than the Disney features to follow, Snow White plays like what might have been a live action fantasy (along the lines of Paramount's Alice in Wonderland or Hal Roach's Babes in Toyland) filmed instead as a animated feature (in three-strip Technicolor, one of only about a dozen features up to that point). The composition of shots, the editing, the pacing, etc., all resemble a 1930s live action movie, somewhat heightened stylistically in its adaptation to the animated form. That Disney and his team could pull off long scenes of dialogue (like the dwarfs fretting about their seemingly invaded home) and fusing so many different styles of drawing and characterizations (the "realistically" drawn, often rotoscoped Snow White, Queen, and the Prince; the more conventional but character-driven dwarfs, and the standard if beautifully done furry animal material) reflect this pulling together of experience and experimentation.*

The results are uneven. Snow White and the Prince move realistically but aren't detailed. Snow White's nose seems to vanish from scene-to-scene, while the prince looks unfinished when not outright effeminate. But the Wicked Queen is an unqualified, mesmerizing success. In every scene she's in, the film generates atmosphere to spare, and you can't take your eyes off of her.

Just the right balance is struck with the dwarfs: little comedy set pieces with loveable Dopey, exposition from Doc, etc. There's an especially nice character arc involving the irascible Grumpy, who seems modeled after the similarly anti-bath, anti-women grump George "Gabby" Hayes. Watching Grumpy gradually succumb to Snow White's innate, indefatigably kind nature is really the heart of the film. When she falls victim to the Queen's poisoned apple, Grumpy's heartbroken reaction will put a lump in your throat.

As with its memorable songs, Snow White is rightly remembered for its many animation set pieces: Snow White's flight into the forest where she becomes literally hysterical with fear (it's still considered one of the all-time great horror sequences), the washing up and dancing scenes with the dwarfs, the queen's transformation into the old witch, and the dwarfs' pursuit of her at the climax.

Filmed in the standard 1.37:1 aspect ratio, Snow White is presented two ways, giving viewers the option of watching the film on 16:9 TVs with black bars on either side of the frame, or in "DisneyView," which keeps the 1.37:1 framing while unobtrusively adding painted images on the sides (which change every few scenes), in place of the black pillarboxing. The use of theater-like curtains is a nice touch; it's like watching the film in a cozy old movie palace. The painted trees, castle walls, etc., in other scenes are only slightly more distracting. It's a nice feature, and doesn't seem to cause any ill effects on those watching the film on plasma monitors. (The opening titles are windowboxed on both versions, and the RKO logo is seen over the end title card.)

As stated above, the image is essentially flawless. The original film used soft pastels and even soft focus and distortion here and there, and the animation is less detailed and refined in some respects (from an animation standpoint, 1940's Pinocchio, to cite one example, is far more complex) but it still looks just great. The 7.1 DTS-HD doesn't go overboard tweaking the original modest mono track. A 5.1 Spanish track is also included, along with English SDH, Spanish, and French subtitles and menu screens.

Another plus: With Snow White, viewers can bypass the gazillion ads that always seem to precede Disney videos, and the menu screens are also much easier to understand and navigate compared with their older deluxe editions.

Disc one of the Blu-ray includes a previously released audio commentary, along with some new material in HD, most notably an interesting featurette about a heretofore unknown Snow White Returns short subject developed but dropped after the release of the feature, and which was to have incorporated two scenes planned and penciled but not used in the longer movie. Of much less interest are the BD-Live-enhanced games and a new music video performed by Tiffany Thornton, though some may want to check out the featurette about Disney's upcoming The Princess and the Frog, which shows some promise.

Disc two includes The One That Started It All which puts the film into perspective for those unfamiliar with its place in animation history; and a terrific featurette about Hyperion Studios, Disney's Mouse House before moving to Burbank in the early-1940s. The studio's long gone (I once lived nearby and used to shop for groceries and rent videos at the shopping center that currently sits in its place) but some nearby apartments patterned after the dwarfs' cottage are still there.** There's a lot more material: trailers, a karaoke sing-a-long feature, etc., but all of these seem to be carryovers from the DVD version.

Despite the über-aggressive marketing, symbiotic cross-promotion, and almost daunting consumer choices and overwhelming extras, like an overstuffed bedroom closet ready to burst, Disney's classic film is what counts in the end, and it's as universally charming as ever, and has never looked this good before. A DVD Talk Collector Series title.

* Recently, my two-year-old daughter has become obsessed with the Mickey Mouse cartoons of the mid- to late-1930s. Watching them over-and-over, I realized how much more sophisticated they are, animation-wise, than not just the black & white cartoons from a few years before, but also the Mickey Mouse shorts of the 1940s. Clearly, Disney's animators were learning and practicing new techniques on these shorts toward developing their use in features.


** On Hollywood Boulevard near Highland Avenue was a place called The Snow White Coffee Shoppe - it may still be there, but I've not been there in years - where scenes from the movie were beautifulluy painted on the walls. When I asked the owner how he managed to avoid a major lawsuit from Disney all these years he claimed the paintings were all done by original Disney animators who worked on the film. Maybe so.