Paramount // Unrated // September 1, 2009
List Price: $89.99 [Buy now and save at Amazon]
Review by Stuart Galbraith IV | posted October 20, 2009 | E-mail the Author
Gil Grissom, we hardly knew you - at least on Blu-ray, where CBS/Paramount have opted to leapfrog ahead, releasing The Ninth Season - CSI: Crime Scene Investigation, less than four months after debuting the show's First Season to Blu-ray - the first and until now only CSI show available in the format. The decision to jump ahead so many seasons makes economic sense, what with the ninth season shows having finished airing this past May, itself timed to coincide with the First Season Blu-ray release.

As a relative neophyte in all things CSI, I was a bit concerned the leap ahead might be jarring - after all, in the space of half a season, the show loses three of its original characters, including its longtime star. But, happily, early ninth season episodes quite nicely reference shows and characters from way back in its first year, while the departure of Gil Grissom (series star William Petersen) doesn't occur until about halfway through the ninth season, allowing the character to ease out leisurely while gradually introducing his replacement, Dr. Ray Langston (Laurence Fishburne). Moreover, another former regular, Sara Siddle (Jorja Fox), for years billed third after Petersen and Marg Helgenberger (as CSI Catherine Willows), comes back to the series for three guest appearances and whose character is discussed in other shows.

As with CBS/Paramount's Blu-ray of the first season, The Ninth Season is a real knockout. The 16:9 high-def transfers are outstanding and the disc is packed with entertaining, worthwhile extra features. Where oftentimes labels madly seem to be shoveling supplements onto discs without much thought, in this case - from the easy-to-navigate menu screens to the intelligent selection and organization of the extras, it's obvious a lot of thought went into the production of this set. I pegged the first season set as "one of the best TV releases this year." This is at least as good, maybe even slightly better. 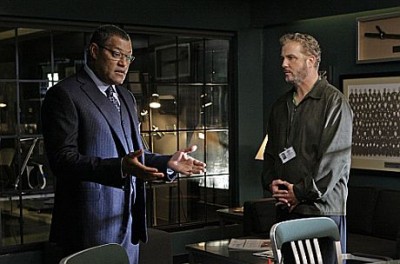 That last character, cocky, jaded, and gratingly sardonic, is one of season nine's few missteps. It's not clear whether Smith quit the show or if the producers decided to get rid of her character, but she's gone by the end of the season at no great loss. She was the kind of shallow, abrasive, and annoyingly acerbic 20-something that populates a million other shows, something CSI can live without, especially with its history of strong three-dimensional women played by Fox, Helgenberger, and others.

Season nine (2008-2009) premieres with the death of troubled CSI Warrick Brown (Gary Dourdan, a regular since the first episode), who dies in Grissom's arms in the opening scenes, his character having been shot in the season eight cliffhanger. Warrick's death prompts a visit by Sara Siddle, who left at the end of season eight, which eventually reignites the romantic sparks between Sara and Grissom that had been left hanging, more or less unresolved, at the end of the previous year. Cleverly on the part of the writers, Sara also revisits tragic characters and circumstances first introduced in the season one episode "Too Tough to Die," with both shows exemplifying Sara's major strengths and weaknesses character-wise. Her occasional return and Smith's departure has prompted speculation that actress Fox may be back on a regular basis in season ten.

Though it's been around for nearly a decade, CSI: Crime Scene Investigation is pretty much the same high quality show it's been since it began: a hugely entertaining popcorn show, slickly produced on an extravagant budget that allows for lots of glossy production value: location shooting, elaborate visual and makeup effects, good sets and music, and an extremely evocative photographic and editing style it practically owns.

Having jumped from the first season to the ninth, I noticed no perceptible drop in quality, writing-wise, though one imagines the enormous struggle it must be for the writers to invent new ways for people to murder one another. (An early season nine show, "Art Imitates Life," does just that. It's about a would-be artist who poses corpses in active, lifelike positions.) Petersen's departure is unfortunate, but so far Fishburne (who, to say the least, has filled out since his Cowboy Curtis days on Pee-wee's Playhouse) makes an interesting replacement, a character perhaps capable in the future of carrying the show. Wisely, the writers have the experienced pathologist but inexperienced CSI starting at the bottom; his steady improvement and gradual acceptance by the team is a good place way to introduce the character.

I'm no fan of producer Jerry Bruckheimer's movies (Top Gun, Armageddon, etc.) but his high-concept approach for once is a good match with creator Anthony E. Zuiker's characters and situations. The Las Vegas setting provides a glamorous backdrop of bright neon in every direction, ostentatious hotel suites, and casinos buzzing with activity 24-7, which in turn facilitate an endless supply of chronic gamblers, crooked Blackjack dealers, Mafioso types, drug addicts, and the like with motives for murder to spare.

Holding it all together is the leading characters' basic humanity. They keep the series grounded. Indeed, part of CSI's appeal is that, no matter how exciting their work is made to appear, the characters themselves clearly regard what they do as a job like any other, and never lose sight of the value of every life lost.

As with The First Season, the equally impressive audio, up to the best contemporary television standards, includes a 7.1 DTS-HD Master Audio with optional English SDH and Spanish subtitles.

The CBS promos from The First Season are absent here, but there's plenty of other good stuff to compensate for that loss. Deleted Scenes are included on all but Disc 2, along with the following features, all in high-definition:

Disc 5: Audio Commentary with writer Naren Shankar, actor Wallace Langham, actress Liz Vassey, writer Bradley Thompson, and writer David Weddle on "A Space Oddity"; Rats in Space (a 27:20 featurette about the making of "A Space Oddity," a "lab rats episode" focusing on the CSI technicians); From Zero to 200 in Nine Seasons (an 18:56 featurette about the 200th episode, directed by William Friedkin, who is interviewed here)

CBS/Paramount has another terrific TV release with CSI: Crime Scene Investigation - The Ninth Season, a set that sells the Blu-ray format as much as the show itself. It's another of the year's best TV releases and a DVD Talk Collector Series title.