Fox // Unrated // October 6, 2009
List Price: $34.99 [Buy now and save at Amazon]
Review by Stuart Galbraith IV | posted November 2, 2009 | E-mail the Author
The granddaddy of holiday movies, Miracle on 34th Street's (1947) popularity as a perennial annual tradition predates even Frank Capra's It's a Wonderful Life by a few years, though The Wizard of Oz aired at Christmastime during the late-1950s and early-'60. In any case, Miracle on 34th Street and Capra's film are among the few classic movies and virtually the only black and white ones people with a low threshold for such things will unhesitatingly watch and enjoy.

In the case of Miracle on 34th Street, its durability is due to a combination of delightful performances, transcendentally magical moments - coupled with an all-important ambiguity - and because its biting, knowing commentary about the commercialization of Christmas sadly becomes more relevant with each passing year. Its effectiveness is also due to writer-director George Seaton's light touch in adapting Valentine Davies's story; the 1994 remake fails miserably partly because of its syrupy heavy-handedness.

Fox's Blu-ray release offers a good but not stellar high-def transfer of the original black and white version only. Nevertheless, the packaging also promises but doesn't deliver "an all-new, colorized Blu-ray version that's sure to delight fans old and new!" I went nuts trying to find the non-existent colorized version, and for a while assumed my player(s) required yet another firmware update to access them. However, that's not the case. Again, to be absolutely clear, despite what it says on the box, the colorized version is not included. No doubt somewhere at Fox heads are rolling.

The disc does include most (but, curiously, not all) of the extras from the 2006 DVD release, with no new material. 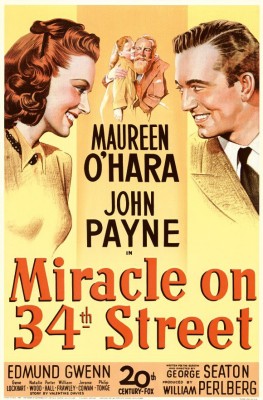 Incredibly, the picture was released in June, and so the original posters downplayed - to say the least - the Christmastime setting


The familiar story: When the actor hired to play Santa Claus at Macy's Thanksgiving Day Parade turns up drunk, an elderly man with a white beard (Edmund Gwenn) agrees to take his place. A resounding success, the man is offered the role of Santa at Macy's 34th Street department store for the holiday season, a job he gladly accepts.

However, supervisor Doris Walker (Maureen O'Hara, convincingly suppressing her Irish accent) is shocked to learn the old man calls himself Kris Kringle and genuinely believes he's the one and only Santa Claus. She wants to fire him, but he's so popular with both customers and their children that she reluctantly allows him to stay on - even after it's learned that he'll sometimes send customers to archrival Gimbels and other stores when their prices and products are better than what Macy's has to offer.

Meanwhile Doris, the divorced mother of nine-year-old Susan (Natalie Wood), becomes friendly with a neighbor, aspiring attorney Fred Gailey (John Payne), who in turn offers to share his apartment with Kris. Fred and Kris worry that Doris's bitterness over her failed marriage is having an adverse effect on Susan, that Doris is imposing upon her little girl a cynical, too-adult worldview bereft of imagination. Among other things, the little girl doesn't believe in Santa Claus.

But Kris's patience and kindness eventually begin to win Susan over. At Macy's Susan is surprised to see Kris talking and singing with another little girl, a war orphan, in her native Dutch. Just as Susan is beginning to think maybe Kris really is Santa Claus after all, Macy's curmudgeonly human resources director - and amateur psychologist (Porter Hall) - threatens to have Kris committed as a dangerous lunatic.

Just about everything in Miracle on 34th Street plays to perfection. The ensemble cast of character actors such as Porter Hall, Jerome Cowan (as the unenviable district attorney), Philip Tonge (as Shellhammer, Doris's co-conspirator), Gene Lockhart and William Frawley (as the pragmatic judge and his no-nonsense advisor) are all marvelous. Alvin Greenman, later a respected casting director, is especially sincere and authentic as the pudgy, overtly New York-Jewish janitor Alfred, while Thelma Ritter adds similar verisimilitude as a harried shopper.

O'Hara is fine as Doris, and Payne impressive as Fred Gailey. Payne typically starred in Fox musicals before this, and Westerns for film and television thereafter, but this undoubtedly is his legacy; odd that Fox didn't cast him in more roles like this.

Natalie Wood, who reportedly believed Gwenn really was Santa during filming, gives one of the best-ever child performances in an American film, though the character's jaded sophistication helps somewhat, i.e., Susan is herself "acting," grown-up that is. In a sense, Wood wasn't incorrect; for all intent and purposes, Gwenn became everyone's image of Santa, no matter that Gwenn had already appeared in 60 movies before this including, occasionally, playing villainous roles (e.g., an assassin in Hitchcock's Foreign Correspondent). After this Oscar-winning success, Gwenn became somewhat typecast as a loveable Kris Kringlian types, in movies like Them! and The Trouble with Harry.

All other aspects are well done. The (for the time) innovative and extensive use of real locations - including integrating the actors into the real Macy's Thanksgiving Day Parade and footage shot inside Macy's with real workers and customers in the background - is highly effective, as is the unusual use of two real department store powerhouses as settings.

I'm always impressed by the film's ambiguity; Seaton and Davies are extraordinarily clever here. There's not a shred of hard evidence that Kris is anything other than an eccentric old man. Unlike most Christmas-themed movies, there are no reindeer in sight, no elves in the wings, no acts of magic. Even the famous, often misinterpreted ending leaves it up to the viewers to decide whether or not Kris Kringle and Santa Claus are one and the same.

In its original full-frame format, the 1080p Miracle on 34th Street looks okay, but it's more in line with the HD DVD of My Favorite Brunette and Road to Rio than, say, the high-def versions of Casablanca or Great Expectations. The image is grayish and rather washed-out with weak whites, and it's not as sharp as it might be. As enormously popular as the film has been for more than 60 years, it's entirely possible the original negative has been over-printed and no longer useable a la Fox's The Robe, but whatever the case this looks fairly good and a step up from the DVD, though a modest step it is.

I'd have rather seen more effort gone into improving the image than bothering with a rather pointless 5.1 DTS-HD Master Audio mix (good for all those explosions and gunfire?). A 1.0 mono track is included, as well as 1.0 tracks in Spanish and French, and subtitles in Spanish and English.

I very strongly suspect Fox is planning a Blu-ray Special Edition of Miracle on 34th Street down the road, and that accounts for the lack of new extras here, and the absence of a few supplements (such as the colorized version) included in previous DVD versions. Carryovers include a charming audio commentary featuring actress Maureen O'Hara, who remembers myriad details of the film she made 60 years before; a generic but entertaining AMC Backstory from 2001 about the film, featuring actors O'Hara, Greenman, and the late Robert Hyatt (who played Cowan's son), among others. Movietone News: Hollywood Spotlight offers footage of Gwenn accepting his Best Supporting Actor Academy Award, while Macy's Thanksgiving Day Parade: Floating in History talks about the location shooting and the parade generally. What's billed as a promotional short is really the film's extremely clever, extended trailer, which features Fox contractees such as Rex Harrison and Anne Baxter. It's really one of the very best trailers of its kind and not to be missed. A poster gallery rounds out the extras. Besides the missing colorized version, this Blu-ray also does not include the first made-for-TV remake, The 20th Century-Fox Hour of Stars show from 1955 with Thomas Mitchell as Kris Kringle. It makes no sense not to include it - unless, of course, they're saving it for a Special Edition. The featurettes are all in standard-def.

Seven decades haven't dimmed Miracle on 34th Street's wit and heartwarming charm in the slightest. The Blu-ray, both in terms of the image quality and the supplements, is slightly but not greatly disappointment, and overall this is Highly Recommended.