Warner Bros. // PG-13 // November 3, 2009
List Price: $49.99 [Buy now and save at Amazon]
Review by Stuart Galbraith IV | posted November 23, 2009 | E-mail the Author
There's been an enormous glut of holiday-themed movies in recent decades, but few have made as lasting an impression as National Lampoon's Christmas Vacation, which, somehow, became a 20-year-old movie in 2009. The third and best of four "Vacation" movies starring Chevy Chase and Beverly D'Angelo (a fifth entry featuring neither was made-for-TV), Christmas Vacation consists mostly of broad slapstick, crude toilet humor and obvious double-entendres, but at its best it captures the nightmarish essence of a Christmas holiday where just about everything goes wrong. The ensemble cast and an infusion of loopy energy in its second act help a lot.

National Lampoon's Christmas Vacation was first released to Blu-ray back in December 2006 with a singularly unimpressive high-def transfer. This "Blu-ray Ultimate Collector's Edition" has a lot of knick knacks packed into a colorful Christmas tin, but the lackluster transfer and extras are the same as before. The stocking stuffers inside, like the film's jokes, range from pretty clever to cheap claptrap. 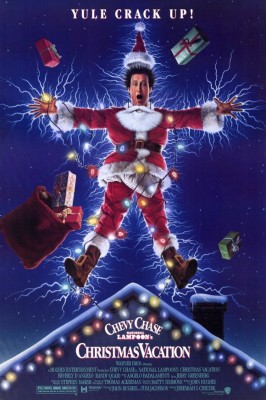 Perhaps only because the first two "Vacation" movies were essentially road comedies, Christmas Vacation similarly opens with some slapstick involving the Griswold family car as Clark (Chase), Ellen (D'Angelo), and their two teenage children, Audrey and Rusty (Juliette Lewis and Johnny Galecki) spend the day searching for the ideal Christmas tree - in what appears to be the Illinois Rockies. (The film is set in Illinois but all the scenes involving real snow were filmed in Colorado.)

In fact, the rest of the picture takes place at the Griswold's upper-middle class suburban Chicago home, writer-producer John Hughes métier. Though mostly a series of gags, holding everything together is Clark's desire for a traditional family Christmas. He's looking forward to surprising his family with an announcement that he plans to use his Christmas bonus to buy a big swimming pool.

Like nearly all of writer-producer John Hughes's movies from the late-1980s on, National Lampoon's Christmas Vacation is a basically rudderless jumble of broad set pieces, held together by over-emphatic upper middle-class suburban nostalgia and sticky holiday sentiment. The sentimental qualities are more in check here than, say, Hughes's Home Alone movies, partly because with Chevy Chase it's hard to tell when he's sincere and when he's being cynical. But the fact remains that after cornering the teen angst market briefly in the middle-'80s, Hughes turned to high concept family films, most of which he wrote and produced but did not direct, and almost all of which are quite terrible.

After a lot of mechanical (at best) and lame (at worst) comedy sequences with Chase at the center of things, Clark's relatives show up and, almost magically, the film suddenly gets a lot funnier. Partly this is due to the fact that Chase's established screen persona is not particularly funny, chiefly because he never really had a persona to begin with. His movie roles defined him in vaguely Bob Hope-esque terms (a loser always getting into fixes while lusting after beautiful women) but usually Chase's inconsistent, badly defined roles were at the mercy of bad scripts. Stripped bare with only his deadpan delivery and soulless grin to carry him, as he was on his famously disastrous The Chevy Chase Show, the comedian had nowhere no turn.

Chase is much more effective reacting to the disasters around him rather than at the center of things, causing them. Perhaps the biggest credit for Christmas Vacation's success goes to whomever had the bright idea of casting good actors rather than Second City-type comedians in the supporting roles. It's a lot of fun watching veteran character actors like John Randolph clearly having fun - he even delivers the film's funniest line: Asked by dispirited son Clark, "How did you get through it?" Clark Sr., smiling impishly, replies, "I had a lot of help from Jack Daniels!"

Later sight gags also payoff because of the ensemble cast's reactions - an overcooked turkey that collapses into a dry, unappetizing carcass; a squirrel loose in the house, wreaking havoc; a mischievous pussycat electrocuted by the Christmas lights.

Though a product of the 1980s, when lab work on high-print run titles like National Lampoon's Christmas Vacation was routinely poor to begin with, the 1.78:1, 1080p transfer here, apparently identical to its 2006 Blu-ray release, is incredibly lackluster. Colors are dull and dirty, and the image lacks a sharpness it should have but doesn't. It's an improvement over the standard-def DVD, but not by very much. Originally released in Dolby Stereo, the Blu-ray is 2.0 Dolby Digital only; there's not even a 5.1 remix, let alone TrueHD. It's not a terrible mix, but given the perennially-selling nature of this title, and the repackaging here as a "Blu-ray Ultimate Collector's Edition" release, the Video/Audio gets failing marks. For the record, 1.0 mono tracks in French and Spanish are also included, along with optional subtitles in all three languages.

What's new is the packaging. The film is packaged in a fairly sturdy Christmas tin. Inside you'll find an adult-size Santa hat, a small box of novelty "snow powder" ("just add water!"), four durable coasters with images from the film, an "I Survived a Griswold Family Christmas" button, and a "collectible Moose Mug figurine." The latter is disappointing: it's tiny with a thimble-sized cup and made of cheap plastic.

Other extras are identical to the 2006 release. There's an audio commentary featuring D'Angelo, Quaid, Galecki, Miriam Flynn (who plays Eddie's wife), director Jeremiah Chechik, and producer Matty Simmons, and a standard-def trailer, but that's it.

Overall, National Lampoon's Christmas Vacation is pretty funny, despite the usual problems associated with John Hughes-written/produced movies and Chevy Chase vehicles. This Collector's Edition offers a tin crammed with tchotchkes but the same crappy transfer and no new substantive extras...for a lot more money. If you don't already have the film and are looking for some holiday fun, then this is recommended with a lot of reservations, but if you have the film on DVD or Blu-ray already, you'll want to hold out for a remastered edition and have every reason to Skip It.