Paramount // Unrated // September 22, 2009
List Price: $129.99 [Buy now and save at Amazon]
Review by Chris Neilson | posted October 4, 2009 | E-mail the Author
When the first season of Star Trek: The Original Series was released on HD-DVD in November 2007, nobody could have expected that it would take nearly two years to see the second season finally released in high definition. Following the demise of the HD-DVD format, Paramount took its time before finally embracing Blu-ray. Now though the wait is over. With the first season released on Blu-ray back in April, season two released in September, and the final season to follow in December, all is right with the world for fans of this classic series.

Though Star Trek was conceived as a grand space opera re-imagining of NBC's popular western frontier show Wagon Train, it was always more about the personal relationships of the characters than it was about adventure, or futuristic technology and aliens. The USS Enterprise was captained by James Kirk, a brash, romantic, adventurer, modeled on C.S. Forester's Horatio Hornblower. The initial idea for the show was that Kirk's most important friendship would be with chief engineer Montgomery "Scotty" Scott, played by Irish-Canadian actor James Doohan. However, because the creators could not justify having the chief engineer on the bridge enough, it was decided to make the Vulcan first officer Spock (Leonard Nimoy) Kirk's closest confidant. Midway through the first season, chief medical officer Leonard McCoy (DeForest Kelly) was elevated to star billing as well when it was noted that his humane sentimentality was a useful foil for Spock's cold logic. 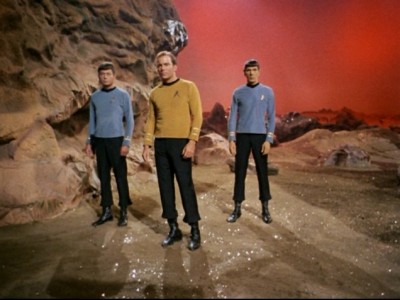 Among the many fine episodes provided in Season 2, four stand out: