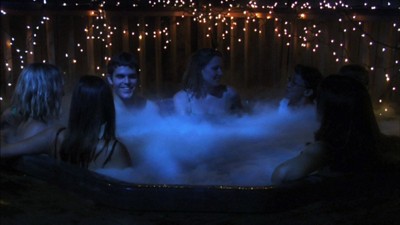 Brad T. Gottfred writes, directs, and stars in this movie. He crafts a brilliant,
multi-faceted story out of the main character who struggles to make his own way
in life without living in the shadow of his father. The plot itself is simple enough
and has been told countless times. However, as you watch and ponder what you are
seeing, the story's meaning becomes deeper. Often, movies that attempt to "be deep
and symbolic" come across as pretentious (I'm looking at you, 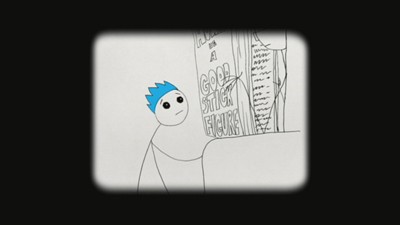 The movie begins with an amusing cartoon of Baxter's own version of Genesis, which
explains who God is and why He created the universe. The stick figure cartoon segments
are peppered throughout the movie. These segments parallel Baxter's journey to find
The One - a woman so perfect that his delusional fantasies of orgies will end. This
is a rare instance where dream sequences and cartoon intervals work extremely well
in a movie. Baxter's mission to end the fantasies ties the sequences into the story
wonderfully. These elements are integral to the story and it truly couldn't be told
as well without them. The interrogation flashbacks of Baxter being quizzed by his
father could possibly have been left out. However, the flashbacks emphasize some
of the issues Baxter is facing: that Baxter is tortured by his father's success,
that Baxter is unable to be his own man, and that Baxter has lived under the rigid
set of rules outlined in his father's bestselling book, Five Lessons on How to be
a Good Person in the Eyes of God. 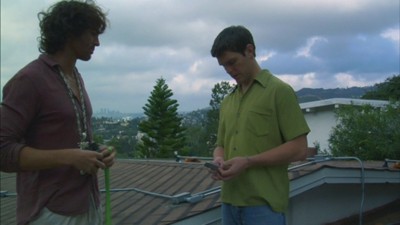 There are a few loose ends that aren't neatly tied up in some of the subplots. There
is a lot of symbolism used in this movie such as portions featuring a turtle on
the road, a bizarre neighbor who is searching for his lost dog, and the use of the
color, bright green. As a personal preference, I appreciate when writers explain
their meaning; I don't like abstract symbolic elements in stories being left open
to interpretation. However, I have to admit that I enjoyed speculating a little
on what some of these elements might have meant. Not a lot, mind you--just a little.

Sound: The audio is presented in Stereo 2.0. It's not the clearest
audio ever, but it serves its purpose. I did have to crank my volume up quite a
bit to be able to catch all the dialogue. Obviously this title wasn't designed to
flex your shiny, new, 7.2 audio system.

Video: The visual quality of this movie is subpar. There is noticeable
blocking, especially in darker portions of the film. The colors seem faded and the
image tends to get blurry in spots.

Extras: The extras included in this set are simply fantastic. I
was left wanting even more and that's a compliment considering I was impressed with
what was already included.