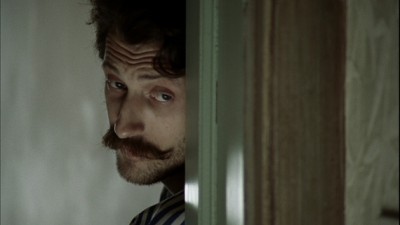 After all the damage Madonna has inflicted on the world with her acting, it's amazing anyone would allow her the chance to actually direct a motion picture. The upside of "Filth and Wisdom" is that Madonna doesn't make an appearance onscreen. That's a huge upside. The downside is that "Filth" is under Madonna's complete artistic control. She might be music royalty with a striking career of pop culture achievements, but she's just not meant for big screen glory.

"Filth" is a meditative comedy focused intently on the senses, teeming with characters that absorb life through touch, sight, and scent. It seems appropriate that Madonna would finesse this material for her directorial debut, as the film seems tailor-made for her flamboyant sensibilities and appetite for naughtiness. Still, just because her questionable taste happened to manifest itself into a filmable screenplay doesn't automatically make it an eye-opening statement of cinema. Even Madonna needs to manage eccentricity carefully when it barrels through the door uncontrollably.

Using T.K. as a philosophical guide to these agitated lives, "Filth" is an episodic odyssey scrutinizing the frustrations of life. It's a low-budget feature that blends poetic passages of soul-searching with comedic spasms typically centered on sexual perversions of every sort. The vignettes are composed passively by Madonna, arranged in a way that surely tickled her, but leaves the viewer cold with their persistent indifference and dramatic constipation. Perhaps Madonna was aching to portray a contained madness, paying homage to the European experimental films of yesteryear, but her imagination is limited to withered stabs at Benny Hill-flavored slapstick and dreary insight into ruined lives yearning for a shot at opportunity. The connective tissue is missing from the whole enterprise, leading the film to resemble a diseased sketch comedy movie practically made up on the spot.

Beyond the story, "Filth" is a love letter to Hutz and his band Gogol Bordello, who make up the majority of the soundtrack with their charged Gypsy punk musical rants. Appreciating the group is a matter of personal taste, but Madonna has a drooling crush she spends most of "Filth" working out of her system. Hutz isn't much of an actor, but he's charismatic, leaving the few bright spots of the picture to him and his bathtub-housed lecturing. In fact, the whole cast sort of swims around looking for leadership Madonna is unable to provide, leaving behind a host of messy performances from limited actors that are difficult to watch.

If someone were to simply glance at the anamorphic widescreen (1.78:1 aspect ratio) presentation for "Filth and Wisdom," I wouldn't be surprised to hear accusations that Madonna made a vampire film. Oddly drained of color, the DVD maintains strong shadow detail and overall HD grit (perfect for close-ups of Hutz), but the colors seem unnaturally muted, draining the life out of the viewing experience.

Filled with a boisterous soundtrack of speaker-bouncing songs, the 5.1 Dolby Digital track on the DVD keeps up a spirited energy, filling the front soundstage with boisterous music cues that retain a proper echo befitting club atmospherics. Dialogue is muffled at times, but never buried, separated suitably from the tunes and larger examples of London life.

"Filth" doesn't add up to much. Either Madonna failed to successfully guide her movie to a coherent state of mind or she simply has no gift for filmmaking. A case could be made for both, though the latter is an awfully tempting summarization of "Filth and Wisdom."