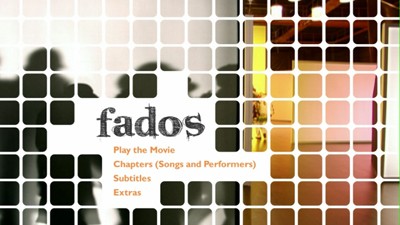 Judging Carlos Saura's 2007 performance film Fados is not as straightforward as simple ratings like "Rent It" and "Recommended" would suggest. To propose one should rent this title, as I do in the sidebar over there, is perhaps good advice from a consumer point of view, but it may not really do justice to the film, which is a well-made piece of cinema. It just may not be the most easily accessible for a good portion of the audience who frequents this site--including myself.

Fado, as it turns out, is a form of music most associated with Portugal, but that also has roots in Africa and Brazil. The songs are performed with guitar and voice as their spine. Other instruments are, of course, allowed, and more modern versions are more rhythmic, incorporating hip hop and rap. It's not a static art form, it flows with the times and the people. The subjects of most of the songs on this disc are lovers in peril, the day to day plight of workers, and fado itself. As the introduction to the film explains, it is the songcraft of immigrants and travelers. It's the only time Saura stops to explain anything, though. I learned more about fado from the back of the DVD case and a little independent research than I did watching Fados on its own. Saura is using this film to share something he loves more than he is to educate. It's one of many films he has made on Spanish dance and music, some of which are narrative driven and some of which are purely performance driven; this is the latter.

Fados is a collection of over 20 songs, performed on sound stages by contemporary artists--though there are also a few nods back to earlier performers. Quite effective, for instance, is Saura's tribute to Alfredo Marceneiro. In the first segment, the director uses an archival performance of Marceneiro singing "Tricana." He projects it on a giant screen while a pair of dancers perform in front of it. This is followed by a rap song, "Marceneiro," performed by NBC, SP, and Wilson, and featuring a chorus sampled from another of the singer's signature tunes. It's a simultaneous portrayal of the old and the new, and full of the kind of visual invention and energetic staging that distinguishes Fados as more than just a live concert movie. Saura brings the songs to life using all kinds of cinematic trickery, including mirrors, rear projection, and colorful lights and sets. He even shows us a little history in the "Revolution" segement, using documentary film footage to show us how these particular songs had political significance.

All 92 minutes of Fados is taken up with music, and for fans of the art form or people who may otherwise be drawn to this dramatic song style, this is likely a great boon. For someone like me who is peeking in from the outside, it's actually a little alienating. I wanted something that was more explanatory. What is this music, where did it come from, and why are these particular performers important? There is neither commentary nor context.

This doesn't, of course, prevent much of Fados from being beautiful. I was particularly struck by the "Morna" segment, where songstress Lura sings the mournful ballad "Flor di Nha Esperanca" underneath a cerulean sky. Then again, I don't know why this chapter was called "Morna" or why any of the other chapters have the names they do. It's like Carlos Saura has made me a mix CD, but he hasn't included any pointers to help me understand where any of the tunes he's chosen have come from or where I can find more. I enjoyed listening and watching, but beyond that, he's left me on my own. 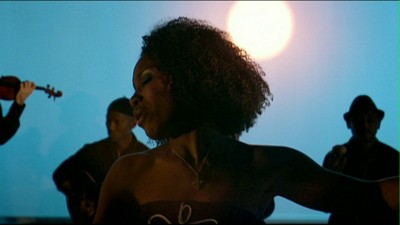 Video:
The 1.85:1 anamorphic transfer of Fados looks very good. The bright, bold colors shine on the screen, and there is no dirt, scratches, or pixilation to otherwise mar the image. The resolution is crisp.

Sound:
The original soundtrack was recorded in Portuguese and Spanish, and it is mixed here in stereo. The sound is clear and clean, with no distortion and good levels given to the various musical elements. Lyrics are subtitled in English.

Extras:
Fados is housed in a clear plastic case with a double-sided cover. It comes with a folded insert that includes the chapter listings, complete with details of the songs and the performers (this info also appears on the scene selection menu on the disc). In addition, the insert has a statement from director Carlos Saura.

The DVD has a photo gallery of Saura on set, two theatrical trailers, and a 25-minute featurette called "The Making of Fados." This program sheds some of the light on this project I was hoping to find in the main feature. Saura explains his feelings about fado, his intentions with the movie, and some of his process, and this is backed by excellent footage from the set, from construction through rehearsal to the filming. Some of the performers speak to the camera, as well.

FINAL THOUGHTS:
Rent It. Don't get me wrong, Carlos Saura has made a movie that looks beautiful and features remarkable performances of songs by Spanish and Portuguese artists. As a sampler of what fado music has to offer, Fados is pleasing to look at and pleasing on the ears; it is not, however, all that informative about where the style comes from and what it means, and you may walk away from it having enjoyed the music but not really understanding why. For that reason, you may want to sample Fados before going all-in and buying the DVD. 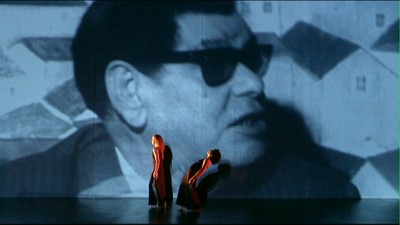