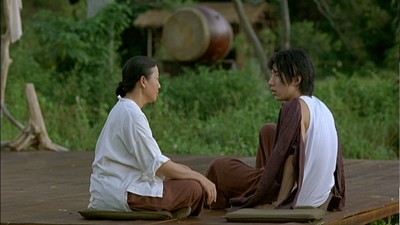 Sid (Jaycee Chan) is the rebellious teenage son of Kwan, a mid-level Hong Kong gangster (Tony Leung Ka Fai). When not pissing off his dad, he plays drums in a rock band--though even this activity is meant to get under the old man's skin. It's at one of the band's shows that Sid comes across Carmen (Hei-Yi Cheng), the moll of his dad's boss, and decides to bed her. Too bad the top dog, Stephen Ma (Kenneth Tsang), catches wind of their steamy rendezvous. He demands that Sid's father remove his son's hands as payback. Though Kwan is a monster and a nutjob, this is too heinous and crazy even for him, and so he sends Sid to hide out in Taiwan with his best man, Chiu (Roy Cheung).

This is the set-up of The Drummer, writer/director Kenneth Bi's 2007 picture, but it's not entirely what it's about. What Sid finds in Taiwan proves more important than what sent him there. On a hike with Chiu, the boy stumbles on a camp where a group of monk-like beat worshipers practice the art of Zen drumming. Attracted both by the intensity of the drum circle, and by the pretty face of drummer girl Hong Dou (Angelica Lee), he decides to join their group and become part of the music. Only, it's not exactly as advertised. The group leaders have him schlepping water, making soup, and just about everything but drumming. You see, to drum, first you must not drum. Also, Hong Dou doesn't much care for him, thanks to a misunderstanding when they first met down in the town.

The Drummer is a little like a music-oriented Karate Kid. Sid must overcome his anger issues and prove himself on the drumline before the girl will fall for him. It's also his key to proving to the doubters back home that he's more than a snot-nosed punk. He and his sister (Josie Ho) both want out of daddy's twisted criminal world, and Sid has unnerving flashbacks to the violence that drove his mother away. She cheated on Kwan with a nightclub drummer, hence Sid's impertinent hobby. It's fairly common territory, yet there is a simplicity to its portrayal that keeps The Drummer from falling under the burden of its clichés. It could be the hypnotic nature of the drumming, but it's pretty easy to accept and get engrossed in what is going on. None of the actors really distinguish themselves--the performances by the non-gangsters are all so low-key that you could almost say it's "acting without acting"--but that's also part of the overall appeal of the drum camp. The group welcomes you.

Kenneth Bi and cinematographer Sam Koa add to The Drummer's overall believability by keeping the visual style as dialed down as the performances. The picture has a realistic look, and Koa makes both the blue-tinged city and the green mountains of Taiwan look beautiful. Even the glitz of Sid's love den is underlit, letting the gold color scheme work its own kind of magic. Whether it's the natural world or its artificial counterpart, the filmmakers let it be what it is. There is no need to gussy it up.

Which makes the gangster scenes all the more jarring. Tony Leung Ka Fai and Kenneth Tsang are cartoon hoods, transplants from an old John Woo movie from Hong Kong cinema's hippest days. Thankfully, they don't factor into the third act of the film in the ways we normally expect from this type of story. Sid's absence causes people back home to re-prioritize, and though everything doesn't necessarily work out for the best, the boy and his family come to some real understanding. Sid's spiritual transformation is also very convincing, and he makes the right choices to avoid going down the same path as his father.

Unfortunately, The Drummer has one ending too many, and the last five minutes of the movie almost destroy all the good that came before. There is an inherent hypocrisy in movies where characters learn martial arts so as not to have to use them in a fight, and Bi very nearly manages to go against that. His final twist puts another test in front of Sid, and he has to prove his transformation is real--which I don't really have a problem with. My issue is with the twist itself. It comes out of left field, and we aren't privy to what tips Sid off. It's an unnecessary attempt to give the audience one last emotional jolt, and it's a hollow ending for a movie that otherwise strives for some real substance. 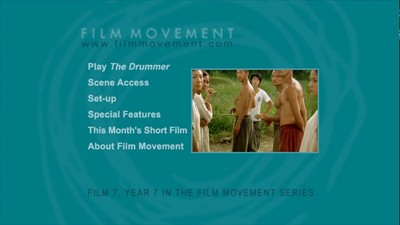 Video:
The DVD for The Drummer has a good-looking 16X9 picture, with warm colors and well-rendered nighttime scenes. The resolution is sharp, with only minor interlacing, and the overall picture quality is excellent. The same can be said about the second feature, the short film Love and War.

Sound:
Both programs are mixed in stereo in their original language, with optional English subtitles as well as Closed Captioning. The audio is very good, with warm tones and a nice balance between the dialogue and the music (both the feature film and the short have a strong musical focus). The Drummer has very real ambiance and good speaker interplay, with background effects lending a particularly authentic air to the nature scenes.

Extras:
Film Movement DVDs come in clear plastic cases with a double-sided cover. The inside front features an essay by director Kenneth Bi explaining a little about his intention with The Drummer. There is also a short making-of featurette on the disc, running 24 minutes. It has interviews with Bi and his cast, and looks closely at the filming of the drumming and the real performance troupe that worked in the movie, the U Theatre Zen Drummers. The group also receives a text biography, along with bios for the director and principal actors, elsewhere in the special features section.

There is a trailer for The Drummer, alongside trailers and info on other Film Movement releases and the series in general. 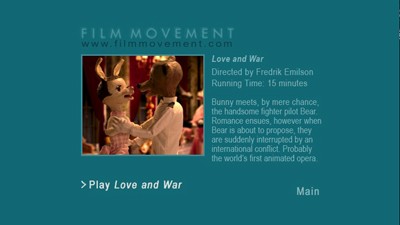 As with all the entries in the Film Movement series, the DVD has a feature-length movie and a short film. This disc's short is an animated Swedish operetta called Love and War. Director Frederik Emilson works with puppets to tell the tale of Bunny and Bear, star-crossed lovers who meet at a time of war. Bear is a fighter pilot, and he must go into battle, where danger and possibly death await him. The story is told entirely through music, from courtship through the fighting and into the bittersweet ending. The puppets have limited movement, but that works well with the operatic storytelling. What is not communicated in the song is communicated instead by gesture. Emilson does well with the romance, and even manages to inject a little humor, and the unique art style makes up for the fact that the puppet battles aren't very exciting. I might have actually liked Love and War better than The Drummer when it comes down to it.

FINAL THOUGHTS:
Recommended. Film Movement offers another compelling double feature. The Drummer is a Chinese film about a gangster's son who finds an alternative to his father's violent lifestyle by joining a troupe of Zen drummers. Though full of familiar elements, Kenneth Bi manages to find some new spiritual nuance in the narrative. Far more creative is the short feature, a Swedish animated film with singing puppets called Love and War. Both offer a fascinating alternate perspective, which is what Film Movement has always been about. 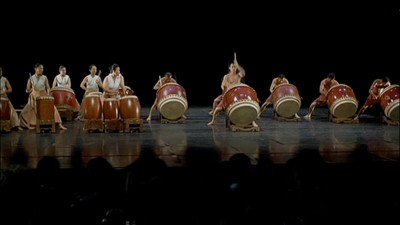