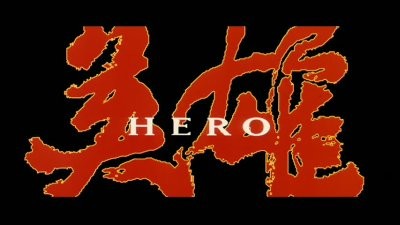 I've rarely felt this conflicted in responding to a DVD release. On one hand, Hero is an outstanding film in every respect. It's beautifully designed and staged, with a rich fable of a plot. On the other hand, this DVD, while branded by Mirimax as a "Special Edition," is simply a re-packaging of the film's earlier release with the addition of a single short extra feature.

A longer 107-minute Chinese cut of Hero exists. It is said to be a slightly more fleshed-out improvement upon the 99-minute US theatrical cut. I don't know where director Zhang Yimou stands on this subject, but this would have been a golden opportunity for Mirimax to revisit the film, and add some decent new features as well. I feel genuinely screwed over, although perhaps my anticipation was foolhardy - this "new" version was released without any fanfare at all. Still, Mirimax is to be chided for calling this repackage a Special Edition, which it most certainly is not. 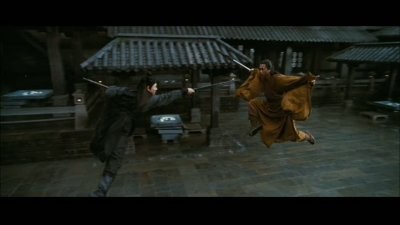 To get back to basics, Hero is a remarkable film. In ancient China, the title character, Nameless (Jet Li), is summoned by the Emperor of Qin province to tell the story of how he single-handedly dispatched three heretofore unbeatable assassins out to murder the Emperor. As Nameless tells the tale, the Emperor notices holes in it and queries Nameless, who admits that there is more to the story. Nameless is actually part of a conspiracy involving said assassins to kill the Emperor. However, as the story continues to evolve, and further layers emerge, we learn the complexity of the warrior code and the many meanings of honor. 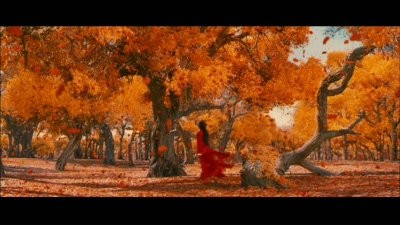 Hero is without a doubt one of the most visually flawless films I've seen. The sets, costumes, and photography are stellar. In fact, every technical aspect of the film is outstanding, including the very involving sound design. The deep dark wood of the buildings, flowing fabric banners, and bright autumnal leaves provide just a few of this film's countless lasting images. The stupendous fight sequences mesh gracefully with the imagery and the acrobatics are lovely, feeling more like extensions of real physical motion rather than impossible stunts done for the sake of the "wow" factor.

Another thing that sets Hero apart is the way it is edited. Unlike more typical martial arts films - and contemporary American action films - you can actually see what's going on in every scene, including the fight sequences. Zhang captures the film lovingly, allowing the work of the crew and cast to sink in, so audiences can see and remember the action - rather than dazing them with rapid cutting that numbingly obscures the photography, art direction, and stunts. 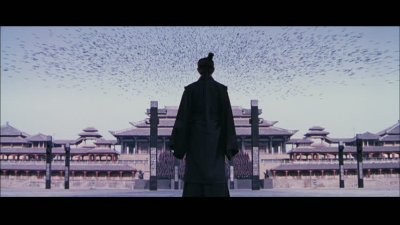 Plotted like a dense medieval fable, Hero also takes time crafting a thoughtful, timeless story of determined, principled action. Jet Li's Nameless patiently and resolutely stakes his position, and allows things to play out as they must, facing each challenge with self-possessed calm. Rather than being broadcast with musical stings and jerky camera movements, the plot's twists are presented with directorial equanimity, and therefore come across all the more profoundly to the attentive viewer. Hero's ultimate strength is its meticulous approach to cinematic storytelling - character, plot, cinematography, design, and choreography - all of it labored over with great patience. The result is entrancing and memorable. 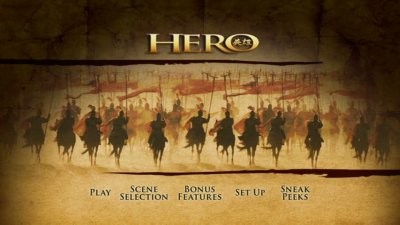 The Video
This is clearly the same transfer from the original 2003 release. The enhanced widescreen image is quite good, although black levels falter at times, looking a bit gray. Frankly, I think this transfer is a bit below the current standard for SD releases. Five or six years ago, I remember this looking stellar - now it looks pedestrian. Still, the wonderful photography by Christopher Doyle is a pleasure to look at, and the transfer, while not ideal, doesn't really detract from the intended look of the film.

The Audio
The original Mandarin track is presented in a very active Dolby Digital 5.1 surround track. It is a truly enveloping sonic experience, with almost constant surrounds. Excellent separation and a broad sound stage make for a brilliantly escapist soundtrack. In addition, dubbed tracks are available in English, French, and Spanish - all in 5.1, too. Potential buyers should be aware that the previous edition's 5.1 DTS track (in the original Mandarin) has been removed from this release. Another complaint related to the soundtrack - the English subtitles are obnoxious, yellow, and a bit pixilated. The inclusion of the original burned-in subtitles would have been nice, or at least subtler encoding.

The Extras
For those who own the original DVD release, the only new item here is a brief featurette called Close-Up of a Fight Scene (9:18). The title is self-explanatory, although the featurette is interesting. Each major fight scene is examined, albeit briefly.

Other than that, the extras are all ported over from the previous edition. They include the making-of featurette Hero Defined (24:00), animated film-to-storyboard comparisons (5:22), and a Conversation with Quentin Tarantino and Jet Li (13:54). There's also a soundtrack promo for the evocative score by Tan Dun.

A conflicted reaction makes for a difficult recommendation. Hero is brilliant, essential cinema for viewers of all tastes. However, the packaging made me really angry, and will certainly disappoint fans. For those who own the previous release, there is no need to get this one. For those who are new to Hero, I'd seek out the earlier - and cheaper - release, which includes a DTS track. Still, in a pinch, this not-so-special edition is recommended.