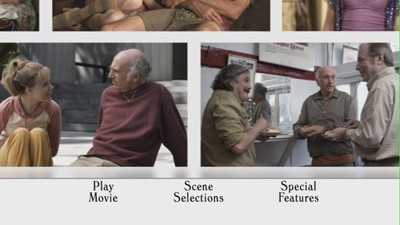 A movie that begins with Larry David talking directly to me pretty much has me at the proverbial "hello." It's the director's game to lose at that point, I'm prepared to hand out the trophy.

The Curb Your Enthusiasm star has stepped into Woody Allen's latest, playing what is essentially the Woody Allen role in Whatever Works. The breaking of the fourth wall that starts the picture is all part of its easy charm, a sly smile in the audience's direction to let them know that they are expected to be a part of this fluff. You're there to hear a story, and a story you will get.

David plays Boris Yellnikoff, a physicist who is not afraid to point out his own genius. The man once had the ideal life: a gig as a professor, possible odds on the Nobel prize, and a wife with money (Law & Order's Carolyn McCormick). Yet, after waking up from nightmares of his own mortality and getting into another fight with his spouse, the cruel chance that governs life can no longer be denied. Though things are good "on paper," that has no practical application. A failed suicide attempt follows and the altogether comic accident that spares Boris also gives him his life philosophy: if human existence is going to be so unpredictable, go with whatever works.

The film picks up years later with Boris, now in his sixties, eking out a meager existence teaching chess to the neighborhood kids and regaling all inferior intellects willing to listen with the truth about the darkness that surrounds him. That is, until the night when Melodie St. Ann Celestine (Evan Rachel Wood, The Wrestler) appears on his doorstep. A runaway from Mississippi, the former beauty queen convinces Boris to let her come inside. The two minutes he offers turns to a month of peaceful co-existence, and ultimately marriage. Though sex is later referred to, their relationship is not so much romantic as it is compatible. In her way, Melodie gets Boris to lighten up, and in his way, he teaches her a thing or two about what it's like to be a New York Jew.

Things only go awry when Melodie's Christian mother (Patricia Clarkson, Elegy) tracks her down, and then her gun-loving father (Ed Begley Jr., Recount). Both intend to take their daughter home, both end up staying in the big city, the chaos of life gripping them, their lives pliable to random chance. As Melodie's eyes start to wander, too, it seems that maybe it's only Boris who is stuck, his self-assurance about how doomed everything is leaving him no room to roam. Then again, if Melodie has taught him anything, it's that he really can roll with whatever comes his way. It's not just "whatever works," but you can make it work, too. (To borrow a phrase from Tim Gunn.)

If all of this sounds familiar, well, it kind of is. For all of this movie's philosophy about life being full of surprises, Woody Allen's movies rarely are anymore. That doesn't stop his efforts from being entertaining, however, and the comfortable space he has created for himself means he can just get on with being Woody Allen and, ironically, not fret. The familiarity also probably stems from the fact that the script for Whatever Works began as a vehicle for Zero Mostel in the late 1970s, and though Woody updates it to fit the politics of our time, its talky nature and silly humor fit the director's classic model. It's a little Manhattan, a little Mighty Aphrodite, and if the old man/younger lover theme seems semi-autobiographical now, the age of the material means it was actually strangely prescient.

Larry David plays a good Woody Allen, probably the best we've seen in recent memory (though I still like Will Ferrell's against-type bow in Melinda and Melinda). He's a tad less caustic but no less appealing than he is on TV, with Woody's talent for erudite phrasing bringing focus to the stereotypical Larry David rant. Evan Rachel Wood is also very good, disappearing far enough into the role of the Southern dumbbell that she's almost unrecognizable. Likewise, Patricia Clarkson goes for broke and has a lot of fun as the girl's mother.

When it comes down to it, Whatever Works should work just fine for fans of either Woody Allen or Larry David, and if you are a fan of both like I am, then this happy convergence is going to hit your funnybone in all the right places. It's a movie that left me smiling when it finished, and I'm still smiling now, and judging by Boris' final soliloquy, I think that was exactly the point. 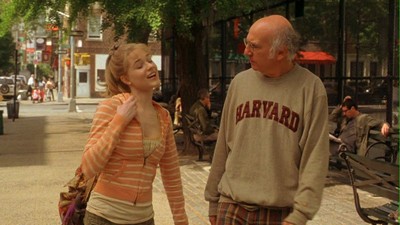 Video/Packaging:
The 1.78:1 anamorphic transfer of Whatever Works doesn't have any problem with compression, though at times the resolution is a smidge soft and the picture does look a little grainy. It's hard to remember if this is what it was like in the theatre and maybe I just didn't notice it. It's not actually that perceptible here, either. You kind of have to be a critic looking really close to even have it come to your attention, I think. More obvious are some of the scenes where the colors run hot or a little washed out. It didn't harm the viewing, but the color timing could have been better.

Sound:
The only option here is for a Dolby 5.1 mix, and it sounds fairly good, though the 5.1 is probably a bit of overkill were 2.0 would have been fine. It's mainly a talking movie, so most of the audio is pretty much centered up front--which is all that is really necessary. 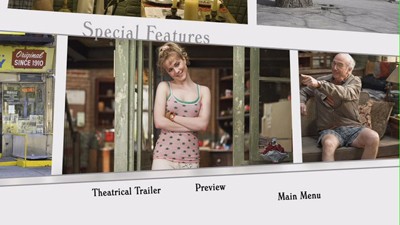 Extras:
The original theatrical trailer for Whatever Works and a trailer for An Education are the only extras. This is as barebones as it gets.

FINAL THOUGHTS:
Recommended. Look, there's no reason to get overly analytical here. Larry David and Woody Allen make a great team, and the talkative comedy Whatever Works provides a load of laughs and is just all around pleasurable to watch. Great supporting performances by Partricia Clarkson and Evan Rachel Wood really stand out, but it's David's show and he has a good time with Woody Allen's words. This is two verbose comedians coming together to gab it up. The DVD has no extras or frills whatsoever, but eh, no big deal. Whatever still works. 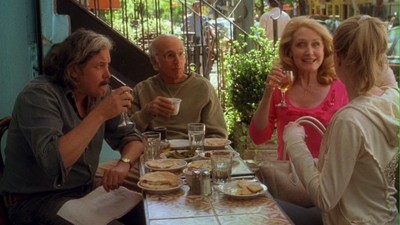