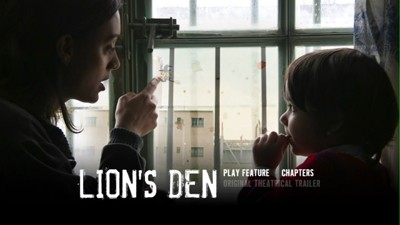 This past year at the Portland International Film Festival, I got to see quite a few films that I had never heard of, some of which were real surprises and that I fear may never be seen on these shores again. Of those, one of my absolute favorites was the Argentinian film Lion's Den (Leonera), a women's prison picture with a unique twist. I anxiously waited to see if it's festival appearances would translate into wider distribution, and though it never arrived in theaters in my area, Strand Releasing has now put Lion's Den out on DVD.

Lion's Den pretty much had me from the word "go." It's been a long time since I've seen as good an opening to a thriller as the first ten minutes of this film. Following a disconcerting animated credits sequence featuring a sing-a-long with South American children--I wondered it they had switched screenings on me--we get a series of quick-cut scenes where the film's heroine, Julia (Martina Gusman), slowly comes out of a state of shock to realize that there have been two bloody murders in her home. The way director Pablo Trapero (alongside three other writers) pulls you into the plot is deftly executed, moving rapidly to knock the audience off balance and put us in Julia's shoes.

Because from there, Lion's Den isn't really a thriller, but a prison drama about a young mother in a situation that has gotten out of her control. Unable to give a feasible account of the evening--which involved her lover and his boyfriend in a knife fight, leaving the boyfriend dead and the lover, Ramiro (Rodrigo Santoro), badly wounded--Julia is locked up pending trial. Since she is a couple of months along in a pregnancy, she is assigned to a maternity ward where convicted mothers can raise their own children until they are four. Depressed and nauseous with morning sickness, Julia takes a while to adjust to life inside, but eventually she becomes part of the community, even taking a lover, Marta (Laura Garcia), and using her outside connections to get goods for the inmates. Several years pass, and all the while Julia keeps fighting for her freedom. When her mother (Elli Medeiros) tricks Julia into taking her young son away, however, everything unravels. Lion's Den is a harsh story filmed in a gritty style and lacking in any overt sensationalism. The script taps into a universal fear--of being caught in a legal system you can't get out of and incarcerated--and adds a specific and unique wrinkle I don't think we've seen in cinema before. The maternity prison is like a daycare center in Hell, a lethal combination of violence, boredom, and dirty diapers. A unique setting is nothing without a great character, however, and Julia is a fully realized human being with a real journey to undergo. The selfish, bleach-blonde girl at the start of the picture is vastly different from the confident, fierce mother that exits the final frame. Outside of one previous acting credit (Trapero's 2006 film Born and Bred), Martina Gusman has almost exclusively been a producer up until now and even has an executive producer credit on Lion's Den. Whatever prompted the switch deserves some kind of tribute or monument, because she's utterly convincing as Julia. So much so, I have cause to wonder if she really was pregnant during shooting. If not, Gusman sported the most impressive prosthetic belly I've ever seen. The performance shows an amazing range that is likely only just scratching the surface of her ability.

The film ends somewhere in the same territory where it began, with final scenes closer to a thriller than the hard-edged drama that passed between. Yet, neither the beginning nor the end feel disjointed from the middle, the transitions are as natural as Julia's changes. Behavioral action drives life, and it can drive a very good movie, as well. I can't stress it enough, Lion's Den is one to look out for. 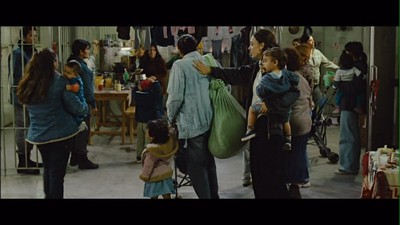 Video:
Lion's Den was shot at 2.35:1, and the anamorphic transfer preserves that aspect ratio. The image quality is a little hit and miss. Resolution is a tad bit soft, but the colors are pleasing, keeping the harsh, grainy look of the picture. Overall, a decent job, though not as perfect as I'd have liked.

English subtitles appear on the screen in yellow and from what I can tell are not removable. It's possible that my disc is different than the full retail version, as it came sans packaging, but I think this is standard operating for Strand and likely this is the final product.

Extras:
The original theatrical trailer is included, as well as other trailers from the studio, and nothing else. Too bad, I'd like to know a little more about the people behind this film.

FINAL THOUGHTS:
Despite the fact that this isn't much of a DVD package, Lion's Den is still Highly Recommended. This prison drama shows how far one mother will go to protect her child, overcoming the harshest of conditions and unfair situations to take care of what is hers. Martina Gusman is a revelation in the lead role, bringing real strength to the part, and keeping what is essentially a melodrama from going overboard so we can stay grounded in the stark neorealism the director strives for. This is one I plan to keep pushing on people, and I hope they will keep pushing it, too. 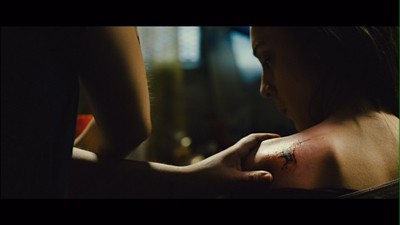