Second Run // Unrated // June 29, 2009 // Region 0 // PAL
List Price: £12.99 [Buy now and save at Co]
Review by Chris Neilson | posted September 28, 2009 | E-mail the Author
Lives caught in motion is the transcendent theme of the recent release from the UK label Second Run entitled Three Films by Marc Isaacs. The transience pervading Isaacs' documentaries is both physical and psychological: physical in that Isaacs's interviewees are literally in transit from one place to another; psychological in that Issacs' camera and questions prompt introspection from his subjects about past experiences and hopes and fears about the future.

Isaacs' first documentary, the twenty-five minute Lift (2001), was filmed in the elevator of a high-rise apartment tower in a low-income English neighborhood composed of elderly Jews on fixed incomes, working-class whites, and a diverse mix of immigrants. Isaacs spent up to ten hours a day for ten weeks stationed in the building's elevator recording the comings and goings of the residents. The residents come to expect Isaacs' presence and, perhaps surprisingly, to feel comfortable sharing intimate thoughts during the brief elevator rides they share with him. Over the course of the many weeks, intimacies about love, desire, and happiness are expressed along with fears about loneliness and impermanence. Small kindnesses also accrue: an anonymous resident puts a chair in the elevator for Isaacs; an elderly Catholic woman affixes iconography to the wall for him; and, a middle-aged immigrant brings him food on multiple occasions. 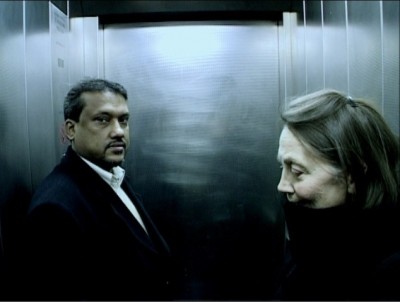 In his follow-up forty-eight minute documentary entitled Travelers (2002), Isaacs succeeds in getting longer and sometimes deeper intimacies from his interviewees by moving from an elevator to a train car. Traveling the same commuter line over several months, Isaacs establishes bonds with another diverse group, this time following them from their regular commutes into their homes and lives. Isaacs subjects are each preoccupied with love to some degree: one is deeply pessimistic after a failed marriage of eighteen years, another is heartsick at a recent separation, another is regretful about a past breakup, another is desperately looking for a deep connection for the first time, another is tenderly caring for an ill spouse of many years, and yet another is a poet-philosopher espousing the primacy of love for the human condition. Through Isaacs' continued contact with his subjects, he affords the viewer the opportunity to see his subjects' views about love evolve in tandem with changes in their personal relationships.

The final film in the collection is the hour-long Calais: The Last Border (2003), a deeply-affecting portrait of the city's transients. Calais is a town in northeastern France so close to England that the cliffs of Dover can be seen across the Channel. It is the first stop for British tourists looking for cheap alcohol and the last stop for migrants seeking to enter England. Isaacs documentary subjects here include xenophobic middle-aged Brits on a day trip, British expatriates on the verge of bankruptcy and desperate measures, and many migrants in dire straits hoping for a better life in England.

There's apparently something extraordinarily disarming about Marc Isaacs that makes so many people of such different backgrounds willing to confide in him whether it be a wish for genocide, a desperate suicide pact, a plan to run away in the night from overwhelming debt, or a despondent confession of utter despair. Though I still can't explain how he does it, I'm in awe of his ability to draw his subjects out, and eager to see more of his work.

Presentation
Three Films by Marc Isaacs has been released from the UK-based boutique DVD label Second Run on a single dual-layered DVD which is PAL-encoded but not region restricted.

Video & Audio:
The three documentaries are presented in their original aspect ratio of 1.33:1. Recorded on standard video, the documentaries do suffer some slight aliasing, banding, and color desaturation, but I detect no problems related to the transfer, and overall find the picture quality to be excellent given the nature of the films.

The 2.0 DD audio is also in keeping with the nature of the film. Some audio is soft or unclear, but overall sound quality exceeds what one would expect from documentary films made under these circumstances.

The one disappointment here is the lack of subtitles. Ironically, most of the immigrants are easily understandable; however, the accents of the working-class white Brits are often nearly impenetrable.

Extras:
The extras on this release consist of a booklet with essays by producer Nick Fraser and writer Graham Greene, and an eighteen-minute interview with Marc Isaac recorded especially for this release. 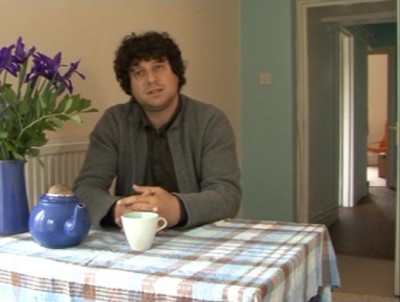 Final Thoughts:
Three Films by Marc Isaacs is yet another remarkable release from Second Run, a label that has distinguished itself for daring choices in independent documentaries and art house films from around the world.