It's Always Sunny in Philadelphia: A Very Sunny Christmas 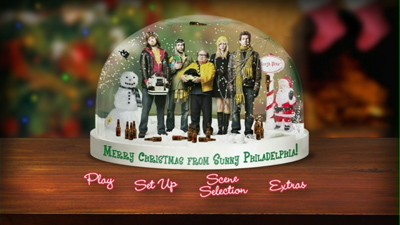 I think it takes a truly cynical person to make a decent Christmas show. You have to have a little wickedness, an understanding of the worst of people. The myth that any joyous holiday comes without its share of contradictions and pain has to be one you can't believe.

It was actually last Christmas that I got hipped to how funny the FX comedy It's Always Sunny in Philadelphia is. Late to the party, I shotgunned as many of the seasons--they were in the midst of their fourth--as I could get my hands on. I became an instant fan of the gang at Paddy's Pub, a comedic team of the classic model: no matter how reprehensible or off the mark their behavior, in their view, it's the rest of the world that is off-kilter. Created by stars Rob McElhenney, Glenn Howerton, and Charlie Day as a vehicle for their talents, the series is one of the funniest shows on television. Its ensemble, which is rounded out by Kaitlin Olson and Danny DeVito, appears to be on an endless quest to see how far they can take their characters, using their own self-serving goals as a way to comment on the ridiculousness of the world we live in. The human condition? What a joke!

That's just the kind of creative mindset that's perfect for taking on Christmas: a holiday that dresses up selfishness as generosity, that causes as much disappointment and sadness as it does fulfillment and joy. Its blind-faith fans would have us accept that the Noel is a unifying day that brings out the inherent goodness in all of us; I'd call that the highest bunk. It's a day where we get to feel swell about being rotten. In other words, just another day down at Paddy's Pub. It's Always Sunny In Philadelphia: A Very Sunny Christmas is business as usual for the gang, but now with a little peace on earth and good will toward men curdling the milk of human kindness.

Clocking in at 43 minutes, A Very Sunny Christmas is basically a double-length episode. It's set up like most of the shows, where the team is divided to pursue two initially separate but ultimately converging paths. In this case, Charlie and Mac (Day and McElhenney) both go searching for the true meaning of Christmas after they discover the childhood traditions they held most dear are abhorrent lies, and Sweet Dee and Dennis (Olson and Howerton) decide to teach their stepdad Frank (DeVito) a lesson by staging their own version of Dickens' A Christmas Carol. They cast Frank as Scrooge because all their lives he has bought himself the presents he knows they most want--in this case, an expensive purse and a high-end sports car--and taunted Dee and Dennis with them. Both sets of stories get some hilarious flashbacks, showing the gang as children and the warped events that warped their young minds. Charlie and Mac make it their mission to repair some past damage, though as with any of their plans, the good intentions are all wrong. Charlie's encounter with a mall Santa midway through the show is one of the funniest things I have ever seen on the show, and there is also a fantastic claymation interlude, a tribute to the Rankin-Bass Christmas specials a lot of us grew up on.

Regular Sunny director Fred Savage (yes, Kevin Arnold from The Wonder Years) also helms A Very Sunny Christmas, and he clearly enjoys the added budget and the expanded running time. The script is by Charlie Day and Rob McElhenney, and though they regularly push the boundaries of broadcast television (FX is more lax than your regular networks), they have added room to swear and even show a little male nudity in this straight-to-DVD release. To their credit, though, they don't go overboard and try to make the episode more risqué just for the hell of it. The writing is too smart for that. The formula works as is, just stick to the basics. These five are all jerks, and we love them for it--almost as much as they love themselves.

I plan to watch It's Always Sunny In Philadelphia: A Very Sunny Christmas again closer to the yuletide, and I'll probably watch it again next year. I could very easily see this as a nice palette cleanser between the more heartwarming It's a Wonderful Life and A Christmas Story, other viewing traditions for me. (Though, both are not without their darker elements, which is also why they stay classics. Same with Dickens. My original theory stands!) Hell, I could catch this show in regular Sunny rotation and be cool with it, it doesn't have to be Christmas, it's another great installment of a consistently excellent series. It's also a perfect jumping-on point for the curious. As a stand-alone, it's accessible enough to be pleasing. 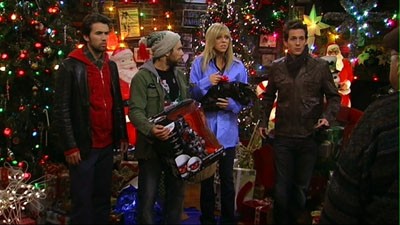 Video:
It's Always Sunny In Philadelphia: A Very Sunny Christmas is a widescreen 1.78:1 presentation, with crisp resolution and a clean image. It's a new show, and the quality is reflective of that.

Sound:
The soundtrack is mixed in Dolby digital stereo and sounds very good. Just being 2.0, there are obviously no big effects, but none are required, either. Dialogue is clear and distinct, and the mixing of the other elements (music, sound effects, etc.) is well balanced.

There are subtitles in English, Spanish, and French, as well as English Closed Captioning. 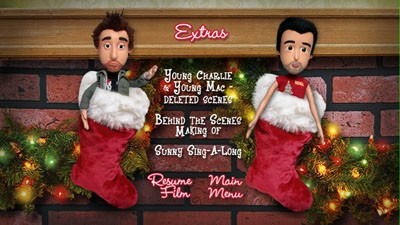 Extras:
The disc comes with three bonus features:
* Deleted Scenes with Young Charlie & Young Mac: three extra flashbacks, each about a minute long. The second, which demonstrates Young Mac's understanding of the female anatomy, is hilarious.
* "Behind-the-Scenes Making Of" Featurette: Just over seven minutes of shenanigans on the set, including a look at the claymation recording and testing out the snow blower. Kaitlin Olson ends up stealing this one with her on-camera ad-libs.
* Sunny Sing-A-Long: A short parody of Christmas special caroling.

It's Always Sunny In Philadelphia: A Very Sunny Christmas also comes with an advertisement for Sunny merchandise and includes a coupon code for a discount at the FX Network online store.

FINAL THOUGHTS:
Highly Recommended. Fans and newbies alike will find much to laugh at in It's Always Sunny In Philadelphia: A Very Sunny Christmas. This straight-to-DVD special is basically a double-length episode with the gloves taken off. The gang tries to rediscover the meaning of the holidays and it's outrageous and quite often howlingly funny. A new favorite! 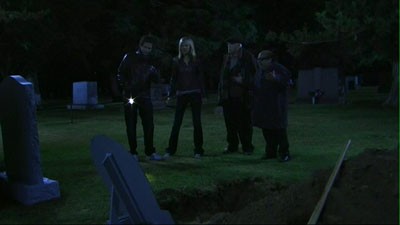