Glee, Vol. One: Road to Sectionals 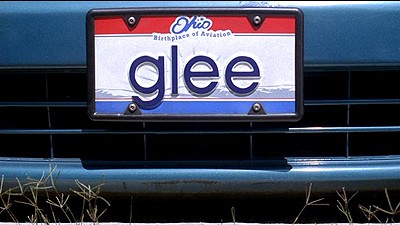 
The Show
Glee is one of those shows that either speaks to you or it doesn't. There is no "I'll watch it if it's on." It's all or nothing. But surprisingly, the audience it grips is hardly narrowly-defined, as the only requirement is an acceptance of musical numbers. And it's not the frequently deal-breaking kind of musical numbers were everyone suddenly breaks out in song and dance. It's the kind of musical numbers you have to have when the show is set in a high-school glee club.

The glee club the show follows is a rag-tag group of underdogs in Ohio, wrangled together by Spanish teacher Will Schuester (Broadway vet Matt Morrison), inspired by his own idealism and memories of his own earlier glee-club success. As with any good underdog story, these kids have hidden talents, and they just need someone to believe in them. Of course, it wouldn't be an underdog story if there wasn't a top dog to stand in their way, provided here by the Cheerios, the uber-popular cheerleading squad led by evil coach Sue Sylvester (Jane Lynch.)

At its core, it's a relatively simple story of high-school social-strata struggle, as the outsider glee kids (all pre-packaged with neat labels like "the gay kid," "the stutterer," and "the wheelchair guy") build their self-worth by literally discovering their voices in the face of indifference or straight-out abuse from their classmates. But it's the stories of each of the show's many characters that makes it unique, led by the trio of Rachel (Lea Michele), Finn (Cory Monteith) and Will. In trying to build the glee club, and thus becoming the show's main protagonist, Will battles Sue and the administration she's bullied into submission, and finds himself in getting close with guidance counselor Emma (Jayma Mays), the polar opposite of his selfish, conniving wife, Terri (Jessalyn Gilsig.) 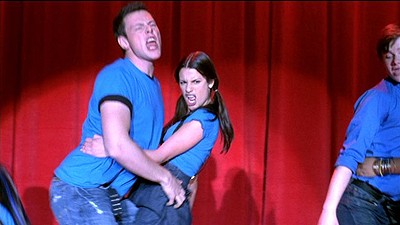 His best hope for singers lays in Rachel and Finn, two more opposites who also find themselves becoming attracted. Type-A personality Rachel was bred to perform on the stage, while Finn only cares about performing on the football field (and with his blond cheerleader girlfriend Quinn (Dianna Agron.) But together, they make beautiful music, and give the show an emotional core couple that's easy to root for, though them being together isn't intrinsic to the show. That's a good thing, since there's a lot keeping them apart, and there are plenty of other characters deserving of screen time, while the story arc that takes the kids to the sectional glee competition requires focus as well.

With so much going on and so many characters to develop, it would have been easy for the show to stumble in juggling it all (it certainly has been for Heroes.) Of course, having basically the whole cast in one building helps, though the series stayed on point despite working through at least five major plots (even when one, involving the baby-crazy Terri and the lengths she goes to, begged to be dropped like a hot potato.) The show also managed to maintain a fine balance in tone, as the overall lighthearted, though darkly comic feel gave way to several moments of true emotion and one shockingly raw scene that was one of the best acting moments on TV in 2009 (partially earning Morrison a Golden Globe nomination.) There's no masking the fact that these kids live in a rather vicious world that could easily eat them up and spit them out, and even amongst the team there's backstabbing and cruelty, but there's a humanity and hope beneath it all.

The strength of the cast in both their acting and musical performances is a big part of why the show can keep so many balls in the air, as Morrison and Mays have fantastic chemistry, Lynch is brilliantly disturbing as her over-the-top coach, and the kids pass for legitimate, though very talented high-schoolers. It's hard to pick a stand-out among the rest of the crew, but it's equally as hard to find a weak link either, as even the "background" members of the team eventually carve out roles for themselves. The guest cast is impressive as well, drawing stars with musical backgrounds, including Kristin Chenoweth, Eve, Victor Garber and Josh Groban.

While the acting and storylines are uniformly good, the thing that makes this show stand out from the rest of the pack are the songs, and the work done to adapt pop music and showtunes to the style of show choir has resulted in some incredible numbers, including the show's signature song, "Don't Stop Believing," the duet between Chenoweth and Morrison on "Alone," Michele's take on Rhianna's "Take a Bow," and the joyful first-arc finale, "My Life Would Suck Without You." Naturally, anything with Michele (a Broadway vet herself) or Morrison at the lead sounds good, but when the cast is working together as an ensemble, as seen on their version of Queen's "Somebody to Love" or the surprising Avril Lavigne cover "Keep Holding On," it makes for a magical experience that lives up to the show's title. That said, not everything is top-shelf, and it seems like when it doesn't work, it really stands out negatively, like almost any venture into the world of hip-hop and several of the rather forced mash-ups.

This set covers the show's first 13 episodes, taking the story up to and through their first competitive performance, before the series took a lengthy hiatus heading into the final nine episodes. A large number of loose ends that developed in the early going are actually tied up by the end of the final disc, making for a neat little mini-series of sorts, with a finale that should be a fine going-away present to hold just about any fan waiting out the months between episodes. There are still some questions to be answered, one rather large and pressing one in particular, so it's not self-contained, but it'll be enough to satisfy the curious. 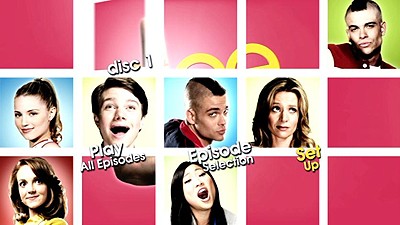 The DVDs
Wrapped in a slipcover that repeats the cover art, a clear single-width keepcase holds the four DVDs in two dual-sided trays. The discs feature nice animated anamorphic widescreen menus designed to mimic the checkerboard promo art design of the set's cover. The discs offer the option to watch all the episodes, select shows, adjust languages or check out extras (on the fourth disc.) There are no audio options, but subtitles are available in English SDH, Spanish, French and Portuguese. There's no closed captioning.

The Quality
The anamorphic widescreen transfers on these discs look great, offering up the show's vivid colors appropriately, along with a nice level of fine detail (check out the fibers on Rachel's sweaters for an example.) With no dirt, damage or noticeable compression artifacts, the only issue is the level of film grain, which can be obvious in scenes with large areas of flat color.

The Dolby Digital 5.1 tracks are very nice, and shine most, obviously, during the musical segments, utilizing the side and rear speakers to boost the songs, which sound beautiful. The rest of the scenes put the dialogue center-stage, leaving the surrounds for atmospheric effects.

The Extras
Surprisingly, this isn't just a collection of promo clips seen previously online (though that's in here too.) It starts with Principal Figgins, head of the aforementioned bullied administration, hosting a five-minute orientation film for eighth-graders entering McKinley High. It's simply ridiculous, with the kind of awful structure amateur films tend to hold, and makes Figgins out to be an insane idiot (that he isn't in the show,) but it's funny nonetheless.

A three-minute music video is up next, for "Somebody to Love," that does a nice job of featuring all of the main cast, characterizing them perfectly without a word spoken. I don't know if this was intended to be a promo for the series, as I've never seen it before, but it would have been perfect for that purpose. It's followed by two full-length character audition pieces (approximately four minutes) from the pilot, with Rachel singing "On My Own" and Mercedes on "Respect," edited around the clips seen in the show. It's nice to see these songs in complete versions (though it's just a minute for Mercedes, as they aren't on either CD, and are excellent performances.

A 12-minute Fox Movie Channel special covers the casting of the series, through interviews with the creators and the executives that put the show on the air, and clips from the auditions with the eventual cast. Getting to hear the background on how the actors were selected is one of those elements you want on a DVD of an ensemble series. Oddly though, it only really covers the characters of Rachel, Finn and Kurt. Why not Will or Artie (played by a former boy-band member?)

The rest of the material has been seen online, starting with the 2:40 "Deconstructing Glee with Ryan Murphy," which lets the creator talk about what the show is and how it was developed. His thoughts are backed by behind-the-scenes footage of the younger cast members rehearsing. It's short, but another chance to hear from Murphy. Also short, at around three minutes, is "Dance Boot Camp," built around an interview with choreographer Zach Woodlee, and the cast's memories of learning the dances from him, and it offers a look at dance rehearsal footage.

"Jane Lynch A to Glee" is a 52-second quick-hit on Lynch and her role on the show. It's paired with "Meet Jane Lynch," a slightly longer look at Lynch and Sue. Up next are three "Things You Don't Know About" clips about Mays, Monteith, Riley and Colfer, with odd facts about the actors. They are followed by 17-minutes of "Video Diaries," from eight cast members, with footage from FlipCams they carried during the upfront presentations for the network. It's very rough, as they are holding their own cameras and just having fun, but it's a rare chance to see these celebs acting like real people.

There are a few of these clips missing here (like the things you don't know about Lea Michele), but it's good to have them here, as they'll likely eventually disappear from online at some point. 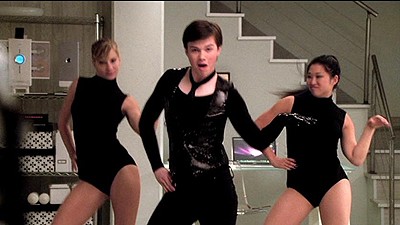 The Bottom Line
If you don't like young, enthusiastic, emotional people singing their hearts out, just keep moving. But if you can get past that, and want to check out a show that captures the pain and promise of the high-school experience, set to a terrific soundtrack, this is one of the best options you have. The DVDs look and sound great, and offer a modicum of extras, but not nearly the haul you'd want for such a great show. That will probably come at a later date, when the rumored complete first season set is released. Until then, this is a good way to kill the downtime or catch-up if you missed the first 13 episodes.