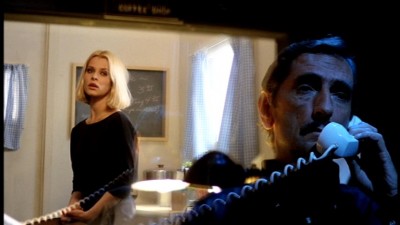 Wim Wenders' Paris, Texas is a film of countless pleasures. Every moment generates a sense that anything is possible - that feeling we all hope for from the movies, but is so rarely delivered. From the wide open spaces of the American Southwest to the Los Angeles suburbs at the foot of the San Gabriel Mountains, the film tracks the physical and emotional journey of a damaged man who struggles to put the pieces of his life back in their proper place. In the lead role, Harry Dean Stanton delivers a performance of unmitigated perfection - a weathered image of a man who self-destructed but lived to tell about it. As Wenders takes us through deserts, mountains, and cities, he shows us some of the subtle ways in which the American landscape defines the character and fate of American people.

A lone figure wanders across a beautiful but desolate wasteland in South Texas. Out of water, he stumbles into a tiny settlement not big enough to be a town - and collapses. The doctor who revives him calls a number in the man's pocket, belonging to Walter Henderson (Dean Stockwell). Walt rushes from his home in LA to collect the man - his long-lost brother Travis (Stanton). Travis doesn't talk to Walt until they are well into their drive back to LA, and even then doesn't explain his whereabouts for the four years he's been missing. All that time, he was presumed dead by Walt, his wife Anne (Aurore Clement), and Travis's son Hunter (Hunter Carson), who has lived with Walt and Anne since Travis's disappearance. Back in LA, Travis struggles to make sense of his situation, and to get to know his son, now nearly eight years old. Finally Travis decides to track down Hunter's mother, Jane (Nastassja Kinski), and takes his son on a road trip back to Texas to find her.

The screenplay, a delicate work by L.M. Kit Carson and Sam Shepherd, provides a probing framework for powerful performances and the striking photography by frequent Wenders collaborator, Robby Müller. I think it's fair to say that Müller's work on Paris, Texas not only influenced a generation of photographers, but has trickled down to every facet of photographic media, including music videos and fashion magazines. This is the look of the "modern" American West, where rusted automobiles, dilapidated buildings, and human beings themselves are dominated and reclaimed by the forces of nature. The landscape, despite the best efforts of people to stake their claim to it, always wins.

Travis Henderson, however, is an exception. He has gone through hell. He surrendered himself to the land, wandering through it for four years - but he survived. And at the end of his journey, when Walt finds him in South Texas, he has been given an opportunity. Travis is determined to undo the mess he left behind. Somehow, his experience in the desert has made him stronger, better, or wiser.

Paris, Texas has a clear three-act narrative structure, yet Wenders takes his time with the story, allowing images to sink in and actors to remain silent and still. Stanton's hollow face and sad staring eyes carry most of the movie, despite outstanding support from Stockwell, Clement, Carson, and Kinski. The film's final pair of scenes between Kinski and Stanton consists of extended monologues, and is a tour de force for these two actors. As unlikely a couple as they are, the relationship evoked in these scenes is as powerful and memorable as any screen romance ever depicted. Familiar as we may be with children as symbols of their parents' love, Wenders expresses this at a deep, cliché-free level that is refreshing and affecting.

No part of Paris, Texas feels underdeveloped or lacking - the script, performances, photography by Müller, music by Ry Cooder, production design by Kate Altman, and sound mixing is all of a piece and part of a coherent vision. Paris, Texas is a mood piece, a character-driven narrative, a meditation, and a true romance. It's unforgettable.

The Video
The Criterion Collection presents Paris, Texas in an enhanced 1.78:1 transfer that looks very film-like. Müller's camerawork is slightly grainy, which fits with the dusty Western settings. This transfer, supervised by Wenders, does not overcorrect the film's look, merely restoring the image to the way it looked in 1984. Colors are bold: blue skies, red rock, green neon lights, and Travis's red cap pop from the earth-toned backgrounds.

The Audio
The 5.1 Dolby Digital surround track is effective and fairly expansive, especially for a 25-year-old film. The music by Ry Cooder is minimal but dominant when present in the mix. Surround effects are spatially appropriate even though their dynamic range is not as great as more recent films. Still, this is a very solid soundtrack that is fluid and immersive; you won't hear anything flawed or unpleasant.

The Extras
Criterion gives us a very engaging group of bonus features, as is often the case. Disc 1, containing the feature, includes a Commentary by Wim Wenders. His discussion of the film is slow, but interesting and methodically delivered. Somehow he seems to pace his comments to the way the film is cut. On the first disc, you'll also find the Trailer (2:15).

Disc 2 contains the bulk of the bonus content. First, under the menu heading Interviews, we have an interview with Wim Wenders (28:58) from German television in 2001. There's a lot of interesting stuff here about Wenders' experiences in and attitude toward the United States that led up to the production of Paris, Texas. The Road to Paris, Texas (42:41) is a documentary from 1989 that includes interviews with Wenders, Müller, Cooder, Stanton, and others - including Samuel Fuller and Patricia Highsmith! - discussing the film. Next is a pair of interviews with Claire Denis (20:27) and Allison Anders (25:14), conducted specially for this DVD; Denis served as Wenders' first assistant director on Paris, Texas, and Anders was a production assistant. Cinema Cinemas (12:12) is a segment from a French television program of that title that documents the making of the film's score.

Next up, under the heading Deleted Scenes and Super 8, we have a selection of Deleted Scenes (23:24) with optional Commentary by Wenders. This deleted footage is presented in an enhanced transfer. Super 8 Footage (7:00) is the uncut version of the home movies we see in the middle of the film; it is accompanied by an optional audio track comprising one of Travis's monologues from later in the film.

Two items are including under the Galleries heading. The first is a selection of Wenders' photographs from the book Written in the West. The second is a gallery of stills by the film's unit photographer Robin Holland.

Paris, Texas is a long and thoughtful movie that kept me on the edge of my seat. The brilliant performances and evocative photography go hand-in-hand with Wenders' unmatched ability to create an atmosphere of unpredictability and quiet wonder. The Criterion Collection has presented another impeccable package around this tender, beautiful film. DVD Talk Collector's Series.