Simpsons: The Complete Twentieth Season, The 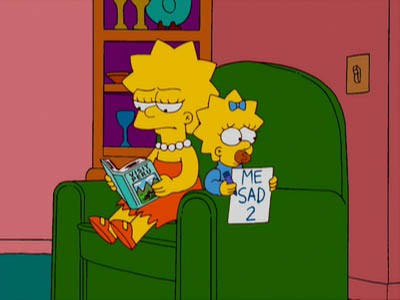 I'm breaking up with you. I know, I know, you've heard it all before. About a year ago, in fact, right after you started painting yourself up like a tart and showing all your goods with your needless new high-def opening, I said that's it, we're through. I had tried to get away before. We had a first decade that was near perfection, but over the last ten years, we have grown further and further apart. What I thought was funny, you no longer thought was funny. I still wanted heartfelt, and you didn't care about heartfelt, you were too busy trying to get along in a world where Family Guy is considered a draw. Still, that movie you made showed me there was still some magic left, that maybe we had a little further to go together. But then you changed and you said you didn't care who knew, and by changing that classic opening sequence, you said the Simpsons that I had started my adult life with was no more. You beat me to our mid-life crisis. You were the first to buy the fancy car. Nothing wrong with the car, it runs fine and looks good; you just look like a dope sitting in it.

But here I am again. Your studio has decided to jump ahead, leapfrogging over seven years and going from The Complete Twelfth Season to The Complete Twentieth Season (Fall 2008 through Spring 2009) to show off your new technology and capitalize on the big celebration that just aired on Fox primetime. It's as if they don't care about those other years, and I'm not entirely against the concept. I've all but forgotten what the lost seasons entail, mainly remember episodes that were really bad, like that one where Marge chased Alec Baldwin around on the ocean, rather than laughing fondly at good ones. The problem is, do you guys care at all about this season either? You didn't put any extras on these discs. It's a rush job. Cursory. The Simpsons has always been the top of the heap in terms of marketing, you've sold a lot of goods, but this is just cheap.

Still, still, I try not to judge. I don't know how you feel. I only know how I feel. And I came to this with open eyes. Maybe in the context of DVD, where I could sit and watch the shows in order at my leisure and without distracting commercials or an image of American Dad running across the bottom of the screen to make sure I remember that Fox's Animation Domination only really dominates suckage, maybe this new context would reveal I had been too hasty. After all, I occasionally catch episodes from those missing years in syndication, and they seem new and not so bad. 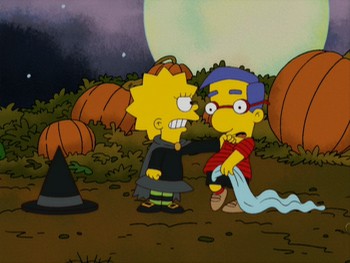 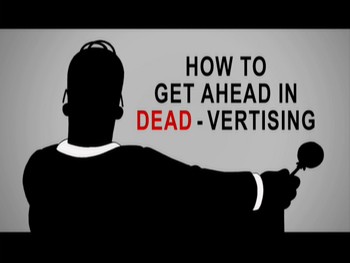 You aren't completely without your capacity to charm, I'll give you that. There are still moments of brilliance peppered throughout these 21 episodes. Lisa's smiley-faced visions when she goes on anti-anxiety drugs in "The Good, The Sad and the Drugly" (episode 17) was inspired visual lunacy. An anonymous kid defending himself against his mother's insistence that he likes "America's Next Top Model" made me laugh out loud and proved you still have some keen observational skills (episode 18, "Father Knows Worst"). That episode also has a brilliant dream sequence with a pushy ghost of Oscar Wilde. Bart running around with Denis Leary's cell phone in episode 2, the cleverly titled "Lost Verizon," was quality pranksterism (plus, the film production of Everybody Poops!). I had never seen the fifth episode in this set, "Dangerous Curves," and was pleasantly delighted to find it was a riff on Two for the Road, my favorite Audrey Hepburn movie. Sure, you weren't particularly good at capturing the mood of the old Stanley Donen film, you just borrowed some narrative tricks, but points for trying.

Then again, "Dangerous Curves" was also a flashback to the early years of Marge and Homer, a device that used to be a pleasant surprise but is now getting stale, particularly as the episodes continue to pile on and contradict one another. Oscar Wilde tried to tell Homer in "Father Knows Worst" about knowing the price of everything and the value of nothing: what is this self-parody worth anymore? Are we meant to forget that you already put Bart on Focusin back in season 11 and think that Lisa getting happy pills is an original idea? Or episode 6, "Home and Lisa Exchange Cross Words," even with its neat Lisa-eye-view of a crossword puzzle world, is the umpteenth time Homer disappointed his daughter when it was the most important to her that he be there. "Gone Maggie Gone" (episode 13) pulls the old gag of sidelining Marge and leaving the family alone to themselves, and it uses a secret society to parody The DaVinci Code--which is great if you don't remember the Stonecutters from Season 6. And let's not even talk about Bart and Milhouse fighting over a girl again in "The Good, the Bad and the Drugly."

Let's face it, you've run out of plots. The ploy of never having anyone age hasn't worked out. Sure, when a sitcom like Friends runs more than five years, the characters stop being characters and become their own types, a bundling of catchphrases and pratfalls rather than being real people, so you at least spent some time trying to get around that problem and had more than a decade of pulling it off. But it's over. Homer, Marge, Bart, Lisa, Maggie, and their supporting cast can't surprise us anymore. Especially since so many of them sound more and more like Hank Azaria being Hank Azaria. (Seriously, how many bits does that guy do per episode?) At this point, you're just looping yourself. And to compensate you're borrowing the silliness and unfunny non sequiturs from Family Guy as some kind of capitulation to the Seth MacFarland school of gag construction. How else do you explain asides like the collection of bounty hunters in the lead episode, "Sex, Pies and Idiot Scrapes," or Marge as Godzilla and Homer as King Kong in episode 15, "Wedding for Disaster"? They aren't funny, they add nothing to the overall cartoon. They're just sad. (Oh, yeah, and regarding "Wedding for Disaster," this is not even Marge and Homer's first second marriage.)

I just can't do it anymore. Sure, you're prettier than ever. I mean, really, you're looking good. Fit. The high-def and digital stuff maybe makes some of your line work look a little jagged, but you're shiny and your movements are lithe and flowing. The way the animation of "It's the Grand Pumpkin, Milhouse" mimics old Peanuts cartoons in this year's annual Treehouse of Horror is stupendous, and we all love the Mad Men parody that is the opening for another of that show's segments. It was much deserving of its viral status. Hell, I'll give you that whole episode. Homer's election day nightmare that served as the opening credits was up there with the best political sketches on SNL in 2008.

So, you're good for a night, and maybe the resulting buzz that lasts for the next seven days until you're next episode airs, but what then, Simpsons? I'll only feel foolish for being suckered in by you again. And guess what? This is where your DVD gambit fails. I don't have the week to catch my breath. I only have the duration of the closing credits. The show is finished, you fall asleep, and I need to grab my clothes and get out the door!

What I'm saying, The Simpsons, is it's not me, it's you. The Complete Twentieth Season is proof you've changed, and not for the better. You may travel fast and you may think you are fooling those who are younger than I into thinking you are hipper and more with it than you are, and you may have some old farts who don't want to admit you're old because it means they're old too, but the truth is, you aren't fooling anyone. It's time to face it: we're through. You just don't know how to make me laugh anymore. 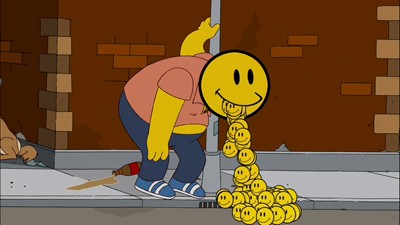 Video:
21 episodes on four discs, with 9 episodes being in full frame (1.33:1), and the final 12 being in widescreen (1.78:1). "Take My Life, Please" is the first show made in high-def, the one where the new opening is used for the first time, and the shows are all widescreen after that. The discs look good, with great colors and excellent resolution--though, as you will see in the screengrabs, there is a pretty big difference between the standard episodes early on and the later ones during the second half of the season.

Sound:
There are multiple language tracks, with the main one being the 5.1 Dolby mix of the original English soundtrack. I didn't notice much by way of effects in this. It was all pretty much down the middle, but it still sounds good and so it's fine.

Spanish, Portuguese, and French dubs are in Dolby Surround, and subtitles are available in English, Spanish, and Portuguese, but not French. 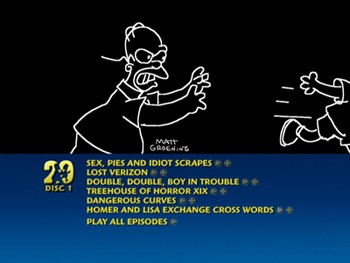 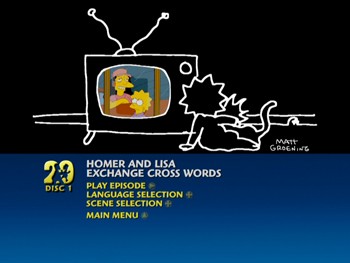 Extras:
So, here's the kicker. Since The Simpsons: The Complete Twentieth Season is a rush job, they've skimped on the usual extras that have made this one of the consistently best DVD series in terms of added value. No commentaries, no deleted scenes, not even a foreign language reel or an introduction by Matt Groening. We've gone from overkill to just about zero. "The 20th Anniversary Special Sneak Peek by Morgan Spurlock" (3:31) doesn't count, I'm sorry. It's an uninformative commercial for a show that aired before this boxed set even came out. Nice job cross-promoting, Fox.

The packaging holds the four discs in a lavishly decorated accordion book, which goes inside a case made out of thin plastic. The art on the accordion is pretty fantastic, with one side being close-ups of the main characters and the other the massive group shot of all the characters from all twenty seasons. Also really cool are the DVD menus, which show us sketches from Matt Groening being drawn on the screen.

FINAL THOUGHTS:
Hey, I don't like it any more than you. I'd love to tell you The Simpsons: The Complete Twentieth Season is, if not as good as the show ever was, at least a collection of episodes that make up for their lack of originality with the funny. I just can't. I've struggled with this, I don't want to be honest, but I can't get around it. The Simpsons is in need of being sent to the great television archive in the sky. It's not totally painful, so I still think you can Rent It and see for yourself if I am wrong, but consider yourself warned. 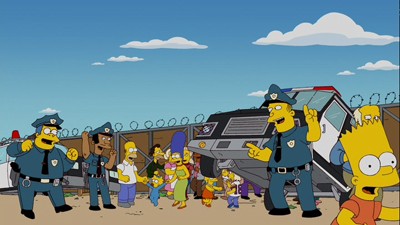