Will Ferrell: You're Welcome, America. A Final Night with George W. Bush 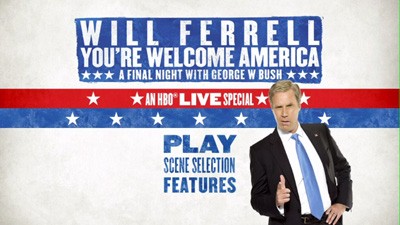 When it was announced early last year that comedian Will Ferrell was going to be doing a one-man Broadway show as a send-off to George W. Bush, it sounded like a pretty good idea. The actor had played the 43rd U.S. President on SNL, and it became the impression to beat. By all reports, the resulting performance piece, Will Ferrell: You're Welcome, America - A Final Night with George W. Bush, was a success, earning good reviews and some Tony nominations. HBO taped one of the nights and aired it as a live special; it's that video document that is released on DVD.

You can hear the big "but" coming, can't you? When I told my friend, a devout Anchorman fan, that I had been assigned the DVD of Will Ferrell: You're Welcome, America - A Final Night with George W. Bush, she didn't seem too excited. "I'm worried they're going to take it too easy on him," she said--and dammit if she wasn't right.

This isn't very high concept. Will Ferrell spends 90 minutes doing his W. impression, running through the President's personal history, from birth to "don't let the door hit you in the ass on the way out," skewing the events to fit the frat boy persona that Ferrell's SNL skits helped foster. He tells a few tall tales, and then he lays on some unbelievable truths that have their truthiness underlined by big "TRUE" graphics, just to remind us of the sad fact that not all of this buffoonery is a joke.

Unfortunately, sad facts are rarely funny, and it pains me to admit, it's the same with this special. Yes, Ferrell gets out a good one liner here and there ("I had a heart attack in my butthole") and some of the absurd scenarios he spins ("Or like this one time, we shot up a sleeping hobo full of Novocain, then we'd yell, 'Pie on the windowsill!' And they'd wake up all numb and poor and we'd laugh.") could have been turned into solid segments in one of his handful of decent movies. The overall concept gets old pretty quick, however. Bush the mumble-mouthed dunderhead is the kind of character that works in the space of a five-minute skit, but it grows stale when you try to stretch it out to 18 skits in a row. At best, You're Welcome, America is another SNL-inspired movie that was best left in the post 12:45 a.m. slot, just after the second musical number.

For as much as has been said about the softball tactics of the news media during Bush's Presidency, can we also talk about how often the Hollywood satirists seem to get cold feet when portraying the man on film? While The Daily Show and individual comedians haven't been afraid to go for the jugular and give America some incisive commentary on a particularly harrowing eight years of skullduggery, providing that much-needed catharsis I mentioned at the outset, the folks doing the longer work seem to want to let the guy off the hook and paint him as a decent yet dim fellow who got in over his head. Does anyone remember Dennis Quaid's touchy-feely dork in American Dreamz? Even Oliver Stone's W. takes it easy on Shrub, with the normally rancorous Stone feeling sorry for his subject in the end. It's like going to target practice but then worrying about whether or not you're going to hurt the tin cans. Are they just scared they're going to make his dad cry again? Boo f'ing hoo.

Yes, it does feel good to laugh at Will Ferrell's George W. Bush talking about styles of hand jobs, but when You're Welcome, America spends the majority of its time making one of the most harmful men to ever sit in the Oval Office appear harmless, something is amiss. Ferrell occasionally zeroes in on a serious point, kicking Bush for Hurricane Katrina or My Pet Goat, but these brief moments of clarity sit uneasily next to everything else. They come off as a dishonest bid at poignancy, calculated moves to appease critics and make the mostly affluent audience that could shell out what were likely high ticket prices feel good about themselves. The worst comes when Ferrell gives us a sallow W. pondering the lives that have been lost because he went into Iraq and asking for a moment of silence. It's more than we're ever going to get from the real deal, and it brings home with alarming clarity how this little puff piece is not enough. Sure, there is something great about the free speech we enjoy that such a performance is even allowed to happen, but rather than joking that George W. Bush would demand we be appreciative of all the crap he made us eat for eight years, how about someone really demand that he tell us he's sorry instead? 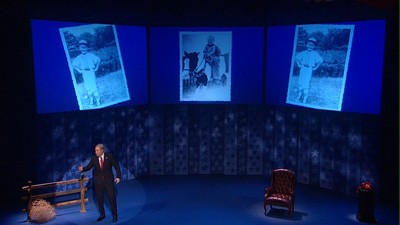 Video:
The 1.78:1 anamorphic transfer on the Will Ferrell: You're Welcome, America - A Final Night with George W. Bush DVD is reflective of the original TV broadcast. Directed by Randall Gladsten, it's not exactly a cinematic achievement--and, in fact, there are numerous instances where the camera appears to be in the wrong place and miss a visual cue entirely--and the resolution and color quality here is pretty good for a live television show.

Sound:
A 2.0 stereo mix has excellent clarity and it's always easy to hear what is being said. There is a little ambient noise, some audience reactions and a little music played during costume changes, but it's nothing that really requires any special audio effects. It's perfectly fine, in this case, to bat right down the middle.

Extras:
Will Ferrell: You're Welcome, America - A Final Night with George W. Bush is packaged in a clear plastic case with a double-sided cover; it also has an outer slipcase that, for once, is not just a repeat of the interior cover, but a die-cut design with a star that lands squarely over Will Ferrell's face. A paper insert gives instructions on how to download the digital copy that comes with your purchase.

Extras on the disc include a fairly lame true-or-false game about George Bush, a short promotional piece called "Road to Broadway" (7 minutes, 45 seconds), and a somewhat funny "Bush on Bush Interview" (13 mins.), featuring the suit-and-tie Ferrell version of Bush interviewing Ferrell's cowboy Bush talking back and forth. This is actually funnier than the main feature.

FINAL THOUGHTS:
Will Ferrell delivers a good enough performance and there are enough chuckles to warrant a Rent It, but Will Ferrell: You're Welcome, America - A Final Night with George W. Bush is otherwise a dull-edged political skewer. Anyone looking for incisive political commentary is likely to be disappointed, as is anyone who just wants to see Will Ferrell be a clown. This is the kind of stunt that should appear dangerous, but is milquetoast-safe instead. It's not just middle-of-the-road, but it's middle-of-the-road on a one-lane highway. And probably closed to traffic, to boot. 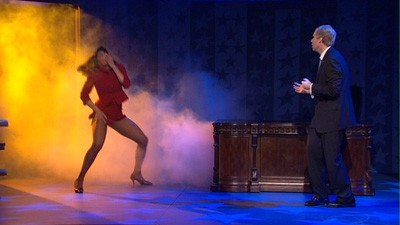