Another exhaustive, entertaining long-form documentary from Philip Nugus and Jonathan Martin. Athena has released Hitler's Bodyguard, a ten-hour, 13-episode documentary that looks at the men who guarded Hitler through over 40 assassination plots, as well as providing a detailed run-down of the German leader's various security organizations, looks into his armored vehicles and transports, and comprehensive information on his secure residences and meeting strongholds. As a bonus, a handy printed viewer's guide in included, giving the viewer a quick reference for keeping German names and organizations straight - something you won't have at hand if you only catch this Military Channel staple on cable. Fans of WWII docs will no doubt want Hitler's Bodyguard in their collection. 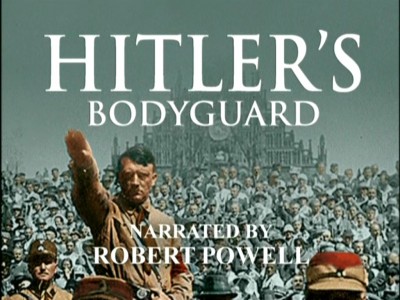 Hitler's Bodyguard begins each show with the same question: how was it that the single most hated man in the world during the first half of the 20th century successfully avoided over 40 assassination attempts on his life? Chronicling in some detail the rise of Hitler from a rabble-rousing political agitator to the eventual Chancellor of Germany and then its absolute dictator, Hitler's Bodyguard makes a strong case for Hitler being aware, almost from the very beginnings of his political career, that his extreme views would require that he employee and maintain an ever-increasing number of bodyguards and elite armed troops devoted to his personal safety (as well as dedicated to spreading terror throughout Germany), lest he be struck down by the equally-burgeoning group of people that would have liked to see him dead. Beginning with the chaos of the various illegally-armed political factions that literally battled in the streets of Germany's Weimar Republic after their disastrous defeat in WWI, the doc establishes how Hitler's political philosophy was born out of the vicious brutality of these street conflicts, and how that brutality never left Hitler's thinking...particularly when it came to protecting himself from enemies both from without and within Germany.

Hitler's first bodyguard unit, established in 1921, was the Sturmabteilung ("storm detachment"), or SA, from which eventually would spring a special elite corps, the Stosstrupphitler, or "Hitler Shock Troop," that provided close, personal protection of the future Fuhrer. Among those elite guards was Bruno Gesche, who joined the Nazi Party in 1922, and who would go on to become Hitler's most trusted personal bodyguard. When the Party was revamped in 1925, a new bodyguard group, the Schutzstaffel ("protective echelon") or SS, was created, with fellow street thug Heinrich Himmler now in command. The SS was first conceived as Hitler's personal protection squad (it would eventually become the most feared of all the internal security units within Germany), but as the unit grew (by 1931, there were over 10,000 SS members), a further elite squad was drawn from this pool: the 8-man Begleitkommando ("escort command") squad, providing close escort for Hitler (Bruno Gesche would eventually lead this group). The SS would eventually number over a million men (including the combat division, the Waffen-SS), with duties including domestic spying, torture, and law enforcement. As Hitler's influence and power grew in Germany, it became necessary to have a security team that would monitor his headquarters and residences. The Leibstnadarte SS Adolf Hitler, the "palace guard," was formed in 1933 and led by tough commander Sepp Dietrich (another loyal bodyguard who would have uncommon access to Hitler). By the year's end, the unit numbered over 1,000 men, all of whom had to meet the strictest measures of Aryan and masculine purity (all had to be over 6 feet tall, and the documentary states that even one tooth filling was grounds for rejection). Eventually, the Leibstnadarte SS Adolf Hitler would become Hitler's personal army, with members swearing allegiance to the Fuhrer - not Germany. Yet another security group, the Fuhrerschutzkommando ("Fuhrer Protection Command"), was assembled by Himmler for the protection of Hitler in his south German providence. Made up of former Bavarian police detectives, the Fuhrerschutzkommando eventually became the Reichssicherheitsdienst, or RSD, a unit of the SS that oversaw all security for Hitler within German borders, as well as his safety at military headquarters in occupied territories. Within the SS, the political intelligence-gathering Gestapo, (Geheime Staatspolizei or "secret state police") was gathered under the Reichssicherheitshauptamt, or RSHA, ("Reich Security Central Office"), which also incorporated the Sicherheitsdienst or SD ("Security Service"), another internal intelligence-gathering arm of the SS. 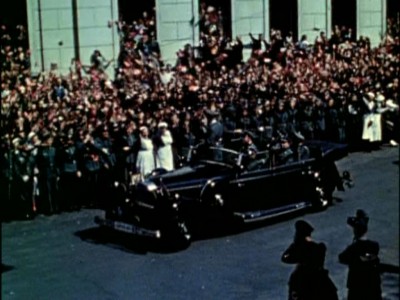 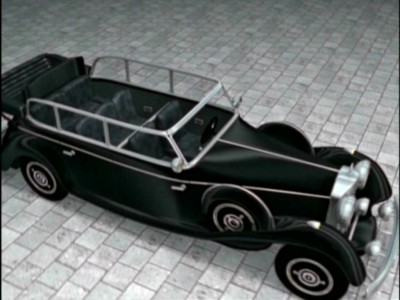 The fact that I could write the above paragraph just from my viewing notes gives you an indication of not only the thoroughness and depth of just one aspect of Hitler's Bodyguard (the discussion of his "security" details and organizations), but also its clarity and simplicity of presentation with a complex subject. I've seen countless documentaries on Hitler and the Nazis, with all of them discussing the SA and the SS and the Gestapo, but none of those docs ever made it as clear as Hitler's Bodyguard as to how those organizations actually developed, and what their exact roles were in Hitler's Germany. Other elements pertaining to Hitler's and the Reich's security before and during the war, such as detailed discussions of his various residences and their defensive capabilities, or the various cars and motorized vehicles that Hitler preferred, with their specs and qualifications, are equally and thoroughly scrutinized (I found the discussion, complete with CGI and exploded diagrams, of Hitler's choice of supercharged Mercedes, fascinating). As with the various security forces, extended looks at Hitler's residences like the Wolf's Lair and the Berghof were also quite informative, as other documentaries tend to just name these places without going into detail as to their fortifications, let alone their psychological importance to Hitler and the Reich (the discussion here of the Berghof isn't just a detailed look at a house; it gets to the center of who Hitler thought he was as a German, as a dictator, and eventually, as an embattled military failure).

While many of the details of the various assassination plots depicted in Hitler's Bodyguard will be familiar to hard-core WWII documentary buffs (and kudos to Martin and Nugus for questioning the validity of Albert Speer's spurious claim to trying to assassinate Hitler), perhaps the most striking thesis put forth in Hitler's Bodyguard was the notion that Hitler craved chaos above all else to ensure his survival. Indeed, in Hitler's own words, he felt that luck had saved him from his two most serious assassination plots: his various security details only uncovered the plots after the acts. Encouraging personal rivalries and professional back-biting to keep all the various organizations on their toes, Hitler's commitment to random action (switching itineraries at the last moment; changing methods of transportation on a whim) seems to have contributed more to his personal safety than all the hundreds of thousands of specially trained men that were assigned one and only one specific duty: keep the Fuhrer alive. That's a fascinating theory I haven't seen in other WWII documentaries on Hitler. 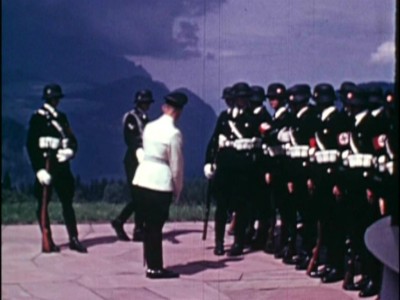 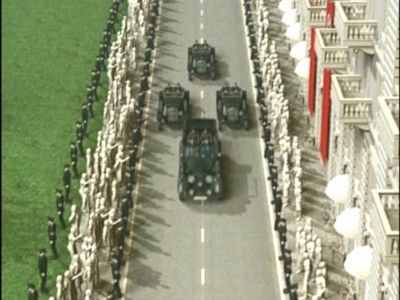 Here are the 13 episodes of the mammoth documentary, Hitler's Bodyguard, as described on the discs' slimcases:

Episode 3: Kill the New Chancellor!
During Hitler's first year in office - as he steered Germany abruptly towards tyranny - he faced no fewer than a dozen attempts on his life.

Episode 4: Night of the Long Knives
In one bloody, well-planned purge, Hitler eliminated his political rivals and ended the looming threat from Ernst Rohm's well-armed Sturmabteilung.

Episode 5: Jewish and Émigré Attempts to Kill Hitler
As the Nazis amped up their anti-Semitic and expansionist activities, Jewish groups, Soviet Communists, and Otto Strasser's Black Front all targeted Hitler.

Episode 6: Kill Hitler Before War Starts
By 1938, people inside and outside Germany - including some of Hitler's senior military personnel - planned preemptive strikes against the Fuhrer.

Episode 7: Bombs and Paranoia
Convinced that a failed bomb plot had roots in England, a Gestapo counterintelligence officer engineered an elaborate sting to snatch British agents. 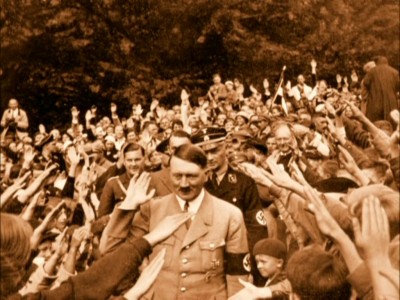 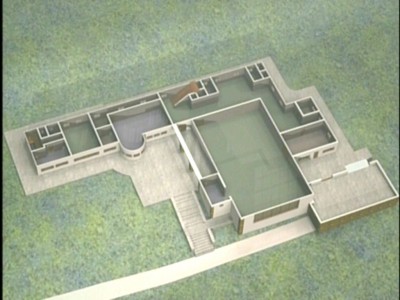 Episode 9: Flights into Danger
One of the first politicians to use campaign flights, Hitler eventually exposed himself to assassination attempts while touring his conquered lands by air.

Episode 11: Attempts to Kill Hitler at the Wolf's Lair
Heavily camouflaged and fortified, Hitler's military headquarters in Poland saw several assassination attempts - including the one that came closest to succeeding.

Episode 12: Nearly Assassinated at the Berghof
Hitler's Alpine retreat in Bavaria is offered opportunities for a pistol-packing German officer, a sniper, a long-range bombing raid, and even an aerial assault by the Allies.

Episode 13: Poison Gas Plot in the Bunker
One member of Hitler's inner circle later claimed to have contemplated flooding the Fuhrer's Berlin bunker with nerve gas as the Allies closed in. 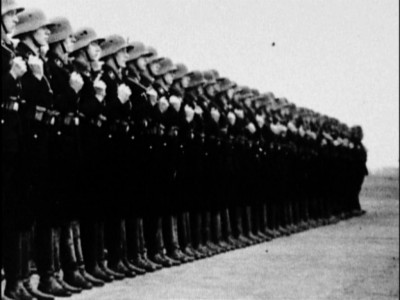 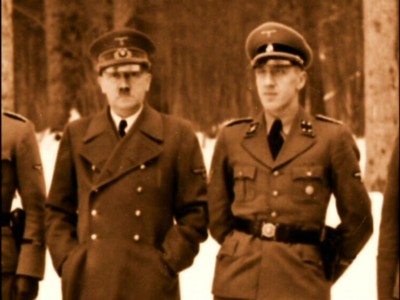 The Audio:
The Dolby Digital English 2.0 stereo audio track does show occasional right/left separation effects, but overall, the clean, clear track displays the dialogue well, with no hiss. Recording levels are refreshingly strong. English subtitles are included - a plus with the plethora of German names.

The Extras:
A small-scaled, printed viewer's guide, with illustrations, is included here. Numbering 20 pages, it gives refresher details for each episode, along with "Questions to Consider" to spur further debate; a bibliography for further reading; and a thumbnail guide to the men and security forces that served Hitler (a handy reference during viewing). A glossy and smart addition here.

Final Thoughts:
One of the most thorough documentaries on Hitler I've seen, with an admirable willingness to finely detail a little-discussed but surprisingly important aspect of Hitler and his rise to power: his security forces. If you liked Nugus' and Martin's earlier Churchill's Bodyguard, Hitler's Bodyguard surpasses that excellent documentary. I highly, highly recommend Hitler's Bodyguard.