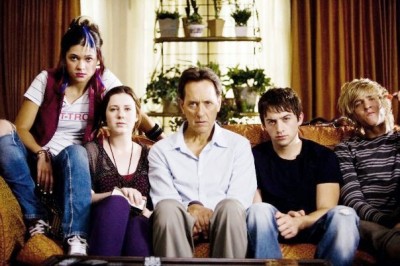 The karaoke scene. It's become an epidemic. I've seen an inordinate amount of comedies over the last few years employ a karaoke bar as a comedic device, typically involving a fuddy-duddy character finding screechy vocal salvation at the hand of a memorable '80's hit. If there's anything that immediately signals lazy screenwriting, it's staging slapstick at a karaoke bar. "Love Hurts" features such a scene. Actually, a few of them. However, it's the least of the offenses contained within this dreadful comedy, which runs through a checklist of clichés to make it to a contractually obligated 90-minute running time. It's a long 90 minutes.

After 20 years of marriage, Amanda (Carrie-Anne Moss) is leaving her husband, Ben (Richard E. Grant). A man of tenacious routine, the break has sent Ben into a tailspin of tears and booze, watching as his wife moves on to other men. Helping Ben out of his funk is son Justin (Johnny Pacar), who uses his teen instincts to push his father into hipper clothes, better hairstyles, and looser women (Including Jenna Elfman and Janeane Garofalo). Enjoying the sexual ride, Ben is nevertheless unable to shake Amanda out of his system, soon dropping the swinging single guy sham to find a way to reclaim his true love.

Richard E. Grant is a fantastic author, a wonderful actor, and a breezy raconteur, but he's always had difficulty judging screenplay quality. I can certainly see the appeal of something like "Love Hurts" to Grant, offering the British actor a shot a thoroughly American romantic comedy to expand his thespian horizons. Criminally, Grant didn't write this picture, leaving the filmmaking duties to former actress Barra Grant, who lacks a sense of adventure or originality.

Predictability isn't a crime, but Barra is paralyzed by the prospect of doing something spontaneous with "Love Hurts." It's the sort of movie where the last frame can be easily predicted just by looking at the first, leaving any hope for stimulating cinema in the hands of the filmmaker, who should at least attempt to deviate from the norm, if only for select moments of welcome surprise. Barra does quite the opposite, offering the aforementioned karaoke scenes, a moment with Ben and marijuana-laced fudge, and married life sentimentality that involves an attic box of memories. It's bloodless material, sluggishly captured by Barra, who's trapped in directorial survival mode, terrified to color outside of the lines.

To make matters worse, Barra includes a subplot following Justin as he attempts to woo a Russian ballet dancer. It moves the teen character from a hipster Yoda role to the star of the show, and the change in the dramatic weather is insufferable. Barra offers the detour as another example of heartbreak to nudge Ben and Amanda back together, but it's a sterile route, pinning toothless sentiment to the lapels of untested actors.

While swimming upstream with this screenplay, Grant does hit an amusing note or two of panic, and he enjoys the rare gift to make any scene work due to his commitment and panache. Still, Barra offers no support, and while placid, "Love Hurts" is unbearably banal, and worse, wasteful.