Fox // Unrated // February 2, 2010
List Price: $29.98 [Buy now and save at Amazon]
Review by Stuart Galbraith IV | posted March 4, 2010 | E-mail the Author
Probably the best of this great sitcom's seven years on the air, The Mary Tyler Moore Show - The Complete Sixth Season (1975-76) features many of the show's funniest scripts, best performances, and most memorable moments. The packaging highlights its most celebrated episode, "Chuckles Bites the Dust," but in fact an unusually large percentage of its 24 shows are just as good, and there's hardly a dog in the bunch. Taking its cue from The Dick Van Dyke Show, Mary & Co. decided to quit while they were ahead the following season, but watching this collection of episodes you'd have thought the series could have maintained this high level of writing and performing and gone on forever.

Fox's three-disc set is serviceable, with okay transfers but no extra features. 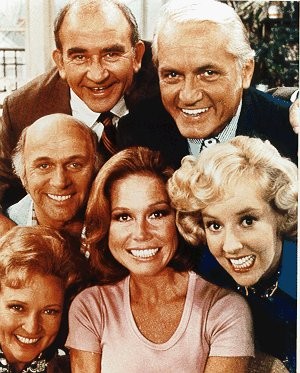 Like Dick Van Dyke, Mary Tyler Moore (the show's real name) was set-up so that its leading character and stories could alternate about equally between work and at home. Mary Richards (Mary Tyler Moore), an associate producer of news programs at Minneapolis's WJM-TV had for the past five seasons been renting a studio apartment in a big suburban house owned by pretentious, conceited Phyllis Lindstrom (Cloris Leachman), where Mary lived in the unit just below her best friend, self-deprecating New Yorker Rhoda Morgenstern (Valerie Harper). But by the start of Season Six Rhoda and Phyllis were long gone; the characters proved so popular they were spun-off into their own MTM-produced sitcoms, Rhoda and Phyllis, shows ironically more popular ratings-wise than Mary Tyler Moore was at the time.

Her friends gone and in a rut herself, Mary decides it's time for a change, and near the beginning of the season moves into a 9th floor apartment in a modern high-rise (the Riverside Plaza), a space actually quite similar to the Hartley's digs on another MTM series, The Bob Newhart Show.

This shift away from home, the absence of Rhoda and Phyllis, and the tighter focus on Mary's relationships with her colleagues really gave the series big boost creative-wise. That's because as popular as Rhoda and Phyllis became, they tended to overwhelm episodes in which they appeared, and their interaction with Mary's co-workers was necessarily limited. They were great characters, but in a lot of ways Mary Tyler Moore was better off without them.

Here, the show's writers really get to explore Mary's platonic yet intimate friendships with Lou, Murray, and Ted. For instance, in the superb season-opener, "Edie Gets Married," Mary is at Lou's side when his ex-wife decides to remarry and invites him to her wedding. It was a divorce from which Lou never really recovered yet he bravely shows up because his ex-wife and daughter want him there, and his grim determination to get through it moves Mary to tears. It's a funny yet also heartbreaking episode - Mary Tyler Moore at its finest.

Along similar lines, "Murray in Love" finds the normally breezy writer developing a serious romantic attachment toward Mary, this despite his relatively happy marriage. He doesn't know how to cope with his feelings, and in a very hilarious scene reveals all to Lou. Later, when Mary and Murray finally talk about it, the episode ends on an extremely touching, bittersweet note.

But there's lots of laughs too, in shows like "Mary's Father," in which Mary comes to believe Terrance Brian (Ed Flanders) is leaving the priesthood because of his feelings for her. It's a really funny episode, and Flanders is so good you wonder if MTM wasn't considering a spin-off for him, too.

Of course, the one everyone remembers is "Chuckles the Clown," the show where WJM's longtime children's show host (often referred to in past episodes) dies in a freak accident and everyone jokes about his death - except Mary, who's appalled by everyone's callousness. It's the kind of show that's actually not all that funny, but it has a wonderfully poetic quality only the very best sitcom episodes every achieve (The Honeymooners' "$99,000 Answer" and The Dick Van Dyke Show's "That's My Boy" are two others that immediately come to mind). Other memorable shows include "Ted's Wedding," "What Do You Want to Do When You Produce?" and "Once I Had a Secret Love."

The Mary Tyler Moore Show - The Complete Sixth Season presents 24 full-frame shows on three single-sided, dual-layered discs. The transfers are okay, significantly better than the MTM-produced Bob Newhart Show, also released by Fox, and those sub-licensed Shout! Factory, but they fall short of pristine. The 1.0 Dolby Digital mono is adequate, and optional English and Spanish subtitles are included. There are no Extra Features, a shame since most of the writers and directors are still around, and almost all of the cast, who memorably reunited on a nostalgic episode of Oprah a few years back.

Television comedy gets no better than this, though one wishes Fox's The Mary Tyler Moore Show - The Complete Sixth Season was treated accordingly. The transfers could be better and the dearth of extras is a disappointment. But the show's the thing, and these are top of the line, therefore A DVD Talk Collector Series Title.