Lionsgate Home Entertainment // Unrated // February 16, 2010 // Region 0
List Price: $39.99 [Buy now and save at Amazon]
Review by Stuart Galbraith IV | posted February 10, 2010 | E-mail the Author
A high water mark of British film comedy, The Ladykillers (1955) finds the genre at the crossroads: it was one of the last Ealing comedies, the penultimate film of its kind for star Alec Guinness, who'd soon move on to other things. Guinness based his performance on older character-comedian Alastair Sim, while co-star Peter Sellers, in his first important film, would later turn to Guinness's work here for inspiration when creating the title role of Dr. Strangelove. The film features rising comedy stars Frankie Howerd and Kevin Connor, and Sellers and frequent foil Herbert Lom are teamed, sort of, for the first time. The film is both funny and suspenseful, often at once, and everyone in the cast a delight.

The Lions Gate/Studio Canal Blu-ray is generally excellent. Hardcore videophiles have decried their handling of titles formerly licensed by Criterion and others but, so far, these complaints are largely unwarranted. This disc is loaded with the same glut of extra features as any Criterion release while its transfer, though problematic (see below), is an improvement over the supplements-free Anchor Bay DVD version. 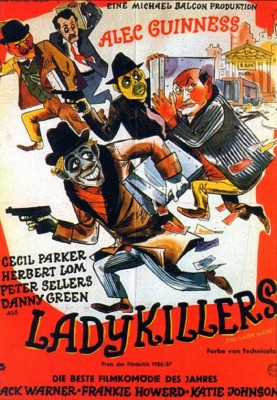 Mrs. Wilberforce (Katie Johnson) is a sweet little old lady, a widow living with her three parrots in a house adjacent to Kings Cross Station in London. A "Professor" Marcus (Guinness) inquires about renting rooms upstairs, and she eagerly agrees to his request that his amateur string quintet be allowed to use the second-floor sitting room for rehearsals. In fact, Marcus and his associates - "Major" Courtney (Cecil Parker), Cockney Harry Robinson (Sellers), hulking ex-fighter "One Round" Lawson (Danny Green), and edgy Louis Harvey (Herbert Lom) - are a gang of villains plotting a sophisticated payroll robbery from a security van at the nearby station, a seemingly foolproof plan hatched by Marcus, a key part of which involves trading on Mrs. Wilberforce's very innocence.

Keeping up appearances the gang carries musical instruments and whenever she's out of the room Marcus plays a recording of the third movement to Boccherini's String Quintet in E, Op. 13 No. 5. The daring robbery is a success, but Mrs. Wilberforce becomes an unanticipated liability.

The foundation of the film's humor is its droll recognition of well-meaning little old ladies as maddeningly high maintenance busybodies. (Comedian Albert Brooks similarly tapped this rarely attempted goldmine of comedy, in his 1996 film Mother.) Mrs. Wilberforce, though never anything but sweet and proper, drives the crooks crazy with her endless interruptions: complimenting them on their "performances," offering them afternoon tea, asking for help giving one bird its medicine. Marcus assumed the frail septuagenarian would be easy to manipulate but the very opposite proves true. Try as they might, the villains are no match for the old lady's gentle but firm authority, even after they decide they've got to kill her.

As was Ealing's trademark, the humor relies on understated characterizations and eccentricities rather than broad farce or slapstick in the typical Hollywood manner. There is, for instance, Mrs. Wilberforce's storybook-like house, made lopsided by the rumbling of locomotives in the tunnel under its foundation; everything in the set design is, like the rest of the film, just a wee bit off - the stairs, the walls, the doorways. There's some funny business with the plumbing: the old lady whacks the kitchen pipes with a huge mallet, the pipes making funny noises like Alec Guinness's laboratory in The Man in the White Suit (1951), also directed by Alexander Mackendrick.

The dialogue is effectively funny precisely because everything is so understated. When one of Mrs. Wilberforce's parrots, "General Gordon," gets loose (its squawking voiced by Sellers, uncredited), Harry slyly agrees to help: "I'm very good with birds," he tells her. But Mr. Harvey is merely irritated: "I'm not chasing any parrot. I don't care if he's a field marshal!"

Comically over-emphatically sinister, cadaverous with teeth resembling dentures one size too big, Guinness's Professor Marcus is especially funny because he's consistent throughout. No matter how badly his cover is blown, he calmly keeps trying to con the old lady right up until the end; his calm patience, in contrast to Lom's growing exasperation, is quite hilarious. Indeed, the gang's varied reactions to her are done to perfection: greedy but extremely nervous Major Courtney is nonplussed; One-Round Lawson, the gang's dumb muscle, becomes fond of her; uncultured Harry humors her while looking to get out.

Another reason the film works so well is Katie Johnson's performance. Though in films since at least the early-1930s, Johnson is like a real little old lady plucked off the street; her acting is invisible. Typical of Ealing's comedies, it's peppered with disarming little moments. In one scene Mrs. Wilberforce wistfully describes how Boccherini's music reminds her of her 21st birthday party, when the string quartet's performance was interrupted by news that "the old Queen had passed away." It's a lovely moment, like something out of James Joyce.

The Anchor Bay standard DVD release from September 2002 (part of its Alec Guinness Collection) presented The Ladykillers in a 1.66:1, 16:9 transfer, while Studio Canal's is 1080p 1.37:1. Which aspect ratio is correct? I've yet to see a definitive answer, but I suspect this was shot with 1.66:1 cropping in mind, but also with the understanding that many older cinemas, particularly in Britain, would likely be exhibiting the film full-frame regardless. Unlike the vast majority of open-matte/cropped widescreen Hollywood releases, which by 1955 were framing for widescreen with acres of empty space above the actors' heads, The Ladykillers is relatively tight throughout, resulting in an image that looks quite good if not spectacular in high-def.

Originally printed by Technicolor, The Ladykillers is saturated with rich hues the atmospheric lighting and cinematography accentuate. The Anchor Bay release was a bit dark while this is too light, at least some of the time, but a lot of negative damage and other imperfections have been corrected, as a "Cleaning Up 'The Ladykillers'" featurette illustrates. The disc is region A/B encoded, with DTS-HD 2.0 audio offered in English, Spanish, and French, with optional French and Spanish subtitles listed on the packaging, but which also include Danish, Dutch, Finnish, German, Japanese, Norwegian, and Swedish, including menu screens in those languages.

This "StudioCanal Collection" release (amusingly, Lions Gate and Studio Canal are equally inconsistent about their names, alternately Lionsgate/Lions Gate and StudioCanal/Studio Canal/Canal +) aims for Criterion-level extras and by and large succeeds. Director Terry Gilliam provides an insightful introduction, though if you're new to the film you might want to watch it after rather than before. Screenwriters Allan Scott (Allan Shiach), Terence Davies, James Mangold, and Ronald Harwood are also interviewed about the film, offering interestingly varied perspectives.

Probably the best supplement is the superb if too-short 2002 documentary Forever Ealing, which is loaded with great clips and interviews about the studio with actors John McCallum and Googie Withers, John Mills, Derek Bond, and Richard Attenborough, and directors as varied as Martin Scorsese and John Landis. Ealing expert Phil Kemp provides an excellent audio commentary, a trailer (in high-def, the other supplements are not) is also included, and film critic David Parkinson contributes an interesting essay for the set's full-color booklet, making the case that the entire story save for the last scene unfolds entirely in Mrs. Wilberforce's imagination.

The Ladykillers' delicious black humor holds up well and the film's ranking among the all-time best British films is deserved. While this StudioCanal Collection release isn't perfect, it gets its series off to a good start. As for the film itself, the generally good transfer, and all the worthwhile extra features, this is a DVD Talk Collector Series title.