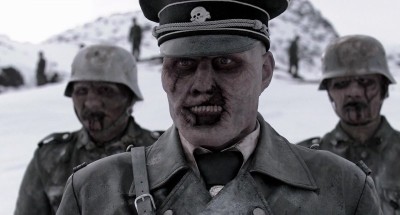 Now that Dead Snow has been made, it's surprising to think that a movie about Nazi zombies hadn't already been done. It's a top-notch gimmick that comes to life here with a combination of jolts, gore, and, unfortunately, derivative filmmaking. In large part an homage to the Evil Dead series (which it directly references a number of times), Dead Snow is not particularly innovative in terms of atmosphere or technique. It has some fun with its premise, but only manages to skim the surface of an idea rich with possibilities.

The plot, such as it is, follows a trail blazed by innumerable films: A group of friends are vacationing in a secluded cabin for the weekend. On their first night, a traveler (whose presence in that remote part of Norway is unexplained) stops at the house. Sensing the group's ignorance and youth, he informs them that during World War II the Nazis had established an outpost in the area. Eventually chased down by the locals, the unit froze to death in the mountains. The visitor then leaves them to think about the "evil presence" the Nazis left behind. The next day, Vegard (Lasse Valdal) goes off on his snowmobile to find his girlfriend Sara, who was expected to meet them at the cabin on foot. While he's away, the group is attacked in the cabin by a roving horde of Nazi zombies. The group splits up and spends the rest of the movie fending off their undead attackers, while Vegard discovers their lair. From here, thing move in a relatively predictable way, with the gory stakes piling up higher and higher, like ever so much loose intestine.

Other than a few well-placed shocks, not much unexpected happens in Dead Snow - from either a plot or scare perspective. The story and characters are merely perfunctory, and while that's to be expected of the genre, Dead Snow fails to enliven the proceedings with the ample visual and technical opportunities afforded by the lovely white mise en scène of the wintry Norwegian countryside. The look is nice, but nothing is done with it. Camera set-ups and movement are monotonous and rote. Production design is sparse and unimaginative. Also, I expected some humor from a film driven by such a tongue-in-cheek concept, but there was none. I don't think I laughed once and don't believe there were any intended "jokes" other than the clear references to the Evil Dead films, which were much funnier than this one. "Laughable" is not the same a funny, though; that term applies to the bizarre sequence in which a lovely young woman has sex on the seat of a frigid outhouse with a chubby man who has just shat there.

Still, the spectacle of Nazi zombies feasting on the entrails of their victims had to be committed to film at some point, and Dead Snow competently performs that crucial service to world cinema. The costumes and make-up effects for our troupe of villains work well. But the special effects dealing with gore were clearly the focus of the crew; both practical and digital effects take center stage as the blood begins to burst, jet, and flow. There's nothing particularly surprising about the blood and guts in Dead Snow, but they are disgusting, and a cleverer film could have made something much more effective and memorable of its Nazi zombie premise without spending half its limited budget on gross-out effects that go nowhere. Dead Snow is decent, and should please fans of the gore-and-viscera brand of horror, but it's also an example of a cool idea wasted by filmmakers who just aren't really that interested in it.

The Video
The enhanced 1.85:1 image looks good. The film has a high-contrast look, with white snowy mountains and deep black nights. The transfer is strong, with good fidelity and color balance throughout, and no defects to speak of.

The Audio
The Norweigan-language 5.1 Dolby Digital soundtrack is okay, but has some glaring problems. For one thing, it's loud. I had my amplifier at half its usual volume. Maybe I sound like the crazy old man next door here, but the music (which is mostly bad Scandinavian rock) is way too loud on the mix. Generally speaking, sound effects are too loud, too. I understand the role of sound in horror films, but this movie practically beats you to death with its cacophonous scare tactics.

The Extras
The DVD contains a second disc for all the bonus content. We start off with Behind Dead Snow (18:36), a behind-the-scenes piece that uses a lot of on-set video footage and interviews. Special Make-Up Effects of Dead Snow (6:29) is a self-explanatory look at the many false heads and entrails used in the movie. We also get the Original Theatrical Trailer and the Teaser Trailer (I'm listing these in menu order). Madness in the North! (48:55) is a pretty thorough making-of doc that focuses on the film's shoot in the far north of Norway. Madness in the West! (17:52) follows the cast and crew to the Sundance Film Festival; it's shot on home video and has an intimate feel. There is a very short selection of Outtakes (2:04) and a brief look at the movie's VFX (3:19). Burning the Cabin (1:00) covers the scene the crew shot last. Finally, The Sounds of Dead Snow (5:41) covers the creation of sound effects without revealing why the DVD mix is so jarring.

Dead Snow leans heavily on a clever premise that never develops beyond the level of a fun (but not very funny, as it turns out) gimmick. The movie is gory, intermittently thrilling, and enjoyable to a point. Mostly, it's a missed opportunity. Rent it.