Princess and the Frog, The 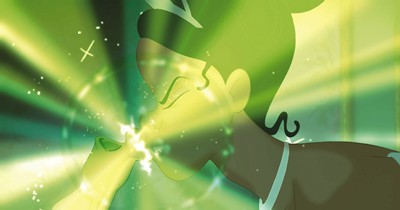 For the first five minutes or so of Disney's The Princess and the Frog, I thought their heralded return to traditional hand-drawn animation was going to be more frog than princess, more warts than beauty. The obvious digital effects in the backgrounds, the rubbery movements of Tiana's parents, and a treacly declaration of intent, letting us know that this kiddie picture would come with a heavy moral about working hard for what you want, all made me think I was in for a leaden collection of clichés scrubbed up with new technology and political correctness. Never to fear, though, once we breeze through the late-starting credits, The Princess and the Frog begins a steady upward climb that may not take it all the way to the top of the studio's considerable heap, but it does nestle the cartoon firmly in the middle, ending the first century of the new decade on the same high note Disney rode in on. (2001's Tarzan is the only non-Pixar Disney film to match this new one's quality in the '00s.)

The movie starts in pre-WWI New Orleans, where we meet the very young friends Charlotte and Tiana (voiced by Breanna Brooks and Elizabeth M. Dampier, respectively). Tiana's mother (Oprah Winfrey) is a seamstress who makes spoiled Charlotte her Princess dresses. Each new storybook she reads the child inspires a new look. Today's selection: The Princess and the Frog. The girls' reactions to the tale reveal a little about who they are. Charlotte would kiss a frog for money, Tiana would not. It's gross, and besides, her daddy (Terrence Howard) has raised her to believe community and hard work is more important than easy success. His dream is to open a restaurant and name it after his daughter.

Jump ahead, straight into the jazz age, and daddy has been killed in the war, leaving Tiana (now voiced by Dreamgirls' Anika Noni Rose) to work two waitressing jobs in hopes of raising enough money to buy the restaurant herself. She's got enough for the down payment on an old sugar cane factory, and on the same day she's to sign the papers, Charlotte (Jennifer Cody) is also throwing a party for a rich foreign prince named Naveen (Bruno Campos). Only Naveen was waylaid by a voodoo huckster named Dr. Facilier (Keith David), a.k.a. the Shadow Man, a hoodoo in deep hock to some bad spirits. He pulls a switcheroo, planting Naveen's embittered valet Lawrence (Peter Bartlett) in the Prince's place and turning the handsome young lad into a frog. Mistaking Tiana for a princess, Naveen asks her for a kiss, but the misplaced smooch turns her into an amphibian, as well. For both of them to become human again, they have to find a real princess to kiss Naveen, and hopefully they can do so while staying out of the Shadow Man's clutches and before Charlotte marries the wrong guy. 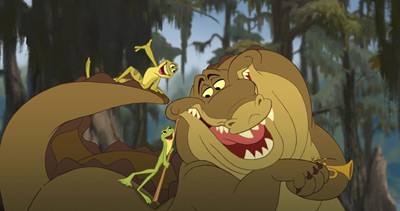 The Princess and the Frog was directed by Ron Clements and John Musker, the same team who helmed The Little Mermaid and Aladdin. As with those films, The Princess and the Frog deftly balances romance, humor, and adventure, working in musical numbers and comical asides while making it all part of the central story. They even introduce talking creatures who provide comic relief, something they are particularly skilled at but that some of their contemporaries have a hard time with. When Tiana and Naveen first escape Dr. Facilier, they make a run for the swamp. There they meet a jazz-loving alligator named Louis (Michael-Leon Wooley) and a Cajun firefly named Ray (Jim Cummings). While in some more recent Disney films these kinds of characters come off as being only there to serve the merchandising, in The Princess and the Frog, they arrive in ways that make sense to the story, making for some of the film's best sequences. The gator attack that leads to them meeting Louis is a thrilling chase, as is the encounter with frog-hunting hillbillies just after Ray joins the group. The luminescent bug serves in the crazy-spirit-guide role, the one who appears mad but simply has a unique way of looking at the world.

There are many wonderful, visually stimulating sequences in The Princess and the Frog. Though the Randy Newman songs penned for the movie aren't all that memorable, their staging often is. When Tiana sings "Almost There" as an expression of her realizing her dream, the imagery morphs to match Jazz-age illustration, while the day-glo, spooky "Friends on the Other Side" brings Dr. Facilier's dark magic to life in a number reminiscent of Oogie Boogie's scene in Nightmare Before Christmas. Facilier is a cool character, looking like a menacing ancestor of Prince, his long limbs making him a slinky, imposing presence. His demonic cohorts appear as twisted shadows, and the animators use the Doc's own shadow as a secondary character, first revealing his true nature but then serving as his diabolical dance partner in crime. He's creepy without being overly scary, his greatest threat being the mystery of the unexplained. Another standout character is Charlotte, who is more than a selfish brat, but a comic tornado with real heart. Her scenes were supervised by Nik Ranieri, who was also in charge of Jafar in Aladdin and Lumiere in Beauty and the Beast, and the artist really goes all out capturing her uncontainable energy. It just proves it doesn't matter what color your skin, when it comes to stealing the show, it's always best to be the funny sidekick. 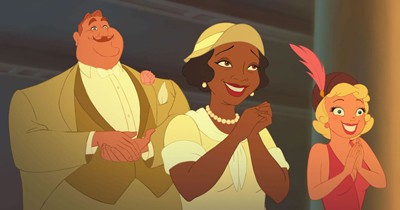 Yes, Tiana is Disney's first African American "princess." Though the film doesn't confront matters of race head-on, the fact that Charlotte is white and Tiana is black and that the white girl's daddy (John Goodman) is the richest man in town and the black girl's died in combat adds an interesting class element to the story. There is clearly a divide between the two, and how Tiana is perceived and how hard it is for her to achieve her goals are a constant topic. Part of the overriding message of The Princess and the Frog is that one must look past outward appearances and even past one's own perception of self in order to see that deeds matter. Both Tiana and Charlotte may look the part of the princess at different times, but it's a title only one of them truly earns. There's a lot here that will be empowering to little girls of any background, and the delivery of the message is rarely didactic. Like I mentioned, any preachiness rests largely with Tiana's parents. Given the narrative burden those characters are loaded down with, I suppose it shouldn't be any surprise that the stiffest line delivery comes from Howard and Winfrey and that their scenes are also the least convincingly animated.

As a whole, The Princess and the Frog is smartly crafted, and the animation is consistently lovely. Its only failing, and what keeps it from achieving true greatness, is a feeling that we have been down this road before. Some of its pieces feel like they have been lifted from other movies, and some of the story variations are superficial at best. Still, it's a good kind of familiar, and probably the right choice for the studio's return to more traditional 2-D cartooning. Thought it would be nice to see them go out on the kind of invigorating storytelling limbs their Pixar compatriots regularly traverse, just having the main Disney crew back for the kind of animated features they've always done best is enough for now. More please!