Private Lives of Pippa Lee, The 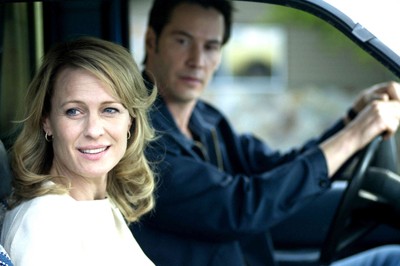 Sometimes a film tells you what it purports to be about at the outset. In the opening scene of Rebecca Miller's fourth film, The Private Lives of Pippa Lee, a semi-creepy writer (Mike Binder) derails toasting Pippa's husband, legendary publisher Herb Lee (Alan Arkin), to toast Pippa instead, noting that in all the years he has known her, Pippa has remained a mystery. Who is Pippa Lee?

Well, as it turns out, Pippa is glad you asked. The middle-aged woman, as played by an exquisite Robin Wright Penn, has just been waiting for someone to give her an excuse to pour over the past. So begins the twisted-up whirlwind structure of her film, jumping back and forth between the here and now and the there and then. In the present, Pippa and Herb have moved into a retirement community in an effort to simplify, a move that has tripped a couple of personal landmines for the May-December couple. It has set off Herb's feelings of obsolescence, and it has caused Pippa to start sleepwalking. Faced with mortality and change, her reminiscences encompass her childhood with her pill-popping mother (Maria Bello) and her eventual teenage rebellion. The early free-spirit version of Pippa is played by Gossip Girl's Blake Lively, a fairly believable choice. Even if she and Wright Penn sound nothing alike, the later montage where we see Lively aging into Wright Penn actually works. There is also a blankness to this early version of the character that Lively is well suited for, first being manipulated by her aunt's lesbian girlfriend (Julianne Moore), and then by a series of boyfriends, leading up to Herb, who becomes her educator, benefactor, and eventual husband. 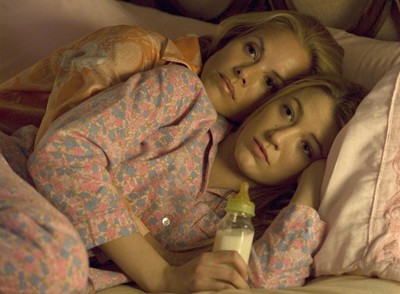 The Private Lives of Pippa Lee is a tale of middle-aged existential angst. Rebecca Miller, whose previous film was the excellent The Ballad of Jack and Rose, is adapting her own novel here, a mistake she made on her second feature, Personal Velocity. Like that movie, the very good stuff falls under the grind of her literary instincts and attachment to the source material. There is much to the latter half of Pippa Lee that probably reads well in prose, but that seems a bit contrived in action. A more merciless adapter might not have treated the narrative with such precious hands. For about an hour of its short 98-minutes, the script is very good. Pippa sifts through the pieces of her life looking for a solution to her developing psychosis, and she finds a kind of kindred spirit in the troubled son of her neighbor. Chris is played by Keanu Reeves, and he has moved in with his elderly parents after some personal troubles have left him divorced, jobless, and homeless. Prone to flannel shirts and being kind to animals, he's that kind of wandering, jerky fixer-upper that is common to romantic movies. He is the male variation on the Magical Pixie Girl, and in softer concoctions is the sort of dude prone to making furniture in his spare time. It's why I like to call him "the Aidan," after John Corbett's barfalicious character on the "Sex and the City" TV show. He's sensitive, yet also prickly. Pardon me while I don't swoon.

Chris has a tattoo of a glowing Jesus covering his torso, and it's one of the many heavy-handed literary symbols that don't quite work in The Private Lives of Pippa Lee. Things fall apart for Pippa at the end of Act Two, and her redemptive, emotional sexual release staring up at Keanu's nippled messiah comes off as more laughable than anything. In fact, part of the problem with the final act is that it seems like Miller is trying to unleash a sense of humor that hasn't really been there prior. The jokes come in between several convenient plot twists that nearly destroy the movie. Luckily for Miller, the first hour of the movie is strong enough and her lead actress is good enough that she doesn't blow it completely. The Private Lives of Pippa Lee is a movie I still liked, even if I was disappointed by it.

The main reason to see Pippa Lee is Robin Wright Penn. The actress has no false notes here, even when the material lets her down. She brings real soul to the role of a woman who has forsaken her sense of self in order to be everyone else's caretaker. I actually wish there was more time spent on the younger Pippa when she was old enough to be Wright Penn and not Blake Lively, like if maybe Herb hadn't been someone she had met until later. Truth is, the movie would have been more accurately titled had Miller called it The Private Life rather than Lives, as the secrets of Pippa's youth don't really seem to constitute more than one existence. Nor does Pippa really engage in much covert living now. What we see is what we get, and Wright Penn manages to make that very engaging, but the script suggests that the real richness is to come in Pippa's tomorrows and has nothing to do with her yesterdays.

Declan Quinn shot The Private Lives of Pippa Lee, and the cinematographer has previously worked with such stylized directors as Mira Nair, Neil Jordan, and Jonathan Demme. He and Miller concoct a lovely visual aesthetic for Pippa balancing the sterility of the retirement community against the nature that surrounds it and Pippa's dreamy visions. In one driving scene, they use rear projection in a way that looks fabulous, and when the driving is done, use the same truck windows to blend into a flashback of Pippa's mother. I wish they had done something more to give the other flashbacks a unique period flavor. They come close in the scenes with Moore, which are washed-out and a little sickly, and they also create a kaleidoscopic montage when the teenage Pippa disappears into a wonderland of pills and sex. It's here where Miller's more literary tendencies work well for her, allowing her to find a way to visually express herself that has the same impact as good prose but using all the tools of cinema. (Compare also the season's other literary adaptation, Tom Ford's A Single Man.) These flashes of brilliance suggest what maybe Pippa Lee should have been throughout, something more instinctual and robust rather than the conventional drama it devolves into.