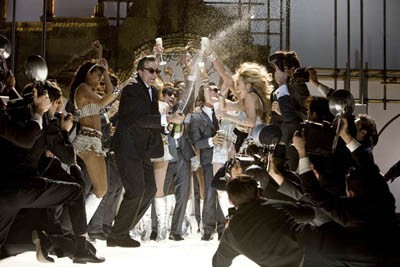 Apparently the title song from the Broadway musical Nine was cut from the film version. Perhaps it would explain why this movie is called Nine, I don't know. It doesn't make sense. Is there 9 of anything in this? It's an adaptation of Federico Fellini's 1963 movie 8 1/2, and there was no story significance to the title of that film, except for a metatextual relation between the number of movies Fellini had made and the fictional movie director's creative struggles within the narrative. I guess it's hubris on the part of the Broadway writers and the people making this version: we can finish it off for the Maestro. I wish I had paid attention if Fellini actually gets a credit in the movie, because they don't give him one on the IMDB page for Nine. That really pisses me off.

Particularly since these gutsy no-accounts don't really bring anything to the table. 8 1/2 starred the great Marcello Mastroianni as Guido Anselmi, a filmmaker whose success was starting to cripple him. The film tracks his schemes to stay ahead of his producers, to keep them from finding out that he hasn't written his script, while also trying to balance his mistress, his wife, and his star. Reexamining his creative process leads to reexamining his love life. It's all connected. 8 1/2 is a freewheeling expression of Fellini's imaginative Id, self-doubt turned into cinematic art.

Nine pretty much sticks to the same story. Daniel Day-Lewis proves a formidable stand-in for Mastroianni, playing Guido Contini, a neurotic, faltering film director due to start shooting in ten days. His regular star, an international sensation named Claudia (Nicole Kidman), is set to feature in Italia, a story of Italy itself, and they are building the sets at the Cinecitta movie studio. Only problem is Guido doesn't have a script, and so he ditches out of a press conference and goes and hides in a country spa. He is eventually joined by his mistress Carla (Penélope Cruz), his wife Luisa (Marion Cotillard), and a hot-to-trot American reporter named Stephanie (Kate Hudson). His producer and crew follows him, too, including the sage of the wardrobe, Lilli (Dame Judi Dench), who gives him advice, and the ghost of his mother (Sophia Loren), proof that Guido's love for women goes way back. There is also the specter of the prostitute the child Guido paid to show him his first pair of mammary glands. The Saraghina sequence is one of the most famous in all of Fellini's films; for Nine, they cast the Black Eyed Peas-singer Fergie in the role. If ever Hollywood needed a lead pipe taken to the back of its metaphorical head, it was during that casting session. Thank the heavens that Michael Buble wasn't available to play Guido.

I'll cop to the rather obvious prejudice I had against this project. I could never wrap my head around the idea of a remake of 8 1/2, much less a musical version. Legally Blonde this is not. But I liked how Rob Marshall handled Chicago and clips I had seen online, including a rather convincing "rehearsal footage" montage (the closing credits, essentially), had caused me to come around. The sets looked phenomenal, and the costumes are superb. My mistake. Marshall has made an aesthetically pleasing and well-acted movie, but it's one that is boring through and through. There is no spark to Nine. The creative fire that Guido is searching for eludes the director, which is too bad. Fellini and his Guido found it in 8 1/2, leading to an orgasmic release at the conclusion; Nine leaves quietly, teasing us that the magic it could never muster is going to happen now that the movie is over, that Guido has it all figured out. Care to share, my friend? 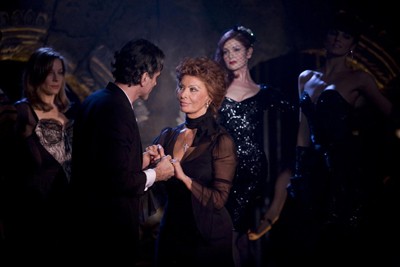 It's not that the performers don't do their best to sell the songs to the cheap seats. As I mentioned, Daniel Day-Lewis is fantastic as Guido, pulling off the smarm and the charm of Mastroianni's original performance, but yet putting his own stamp on it so that it is more than imitation. The other stand-outs are Penélope Cruz as the mistress and Marion Cotillard as the wife. They trade off providing Nine with sexiness and depth, the women who suffer the consequences of Guido's self-absorption and wandering eye. Cruz brings the va-va-voom that Hudson and Kidman fail to conjure despite valiant efforts. Cotillard's goodbye to her husband is heartbreaking, and she looks like Audrey Hepburn with her gorgeous neck and pinned-up hair. She even manages to keep the so-so song cut into the scene from stamping out the emotion. Call it method acting, if you will, but I think we really do see her crushing Daniel Day-Lewis' heart up there on stage.

The fact that the song gets in the way of the big emotional climax actually gets to the heart of what is fundamentally wrong with Nine: the music adds absolutely nothing to Fellini's original story. The show was written by Arthur Kopit, Maury Yeston, and Mario Fratti, and they have essentially assigned at least one song to each of the women in Guido's life. You could argue that the tunes are meant to shed some light on what is really going on with these ladies, except it's an argument that doesn't make any sense. The musical fantasy is all staged on the backlot of Guido's imagination, which Marshall and his team style as an enormous performance space. So, the songs are really only Guido's interpretation of each woman, and outside of his leading actress' revolt against his vision of her as a muse, they really only serve as shallow confirmation of how the director is using these ladies to serve his own ends. You did some nice singing there, girls, but when are you going to tell us something we don't know. If you're going to turn a revered film into a musical, shouldn't the music at least serve a purpose?

Nine seems like a lot of labor going nowhere, alas. Because of the performances of Day-Lewis, Cruz, and Cotillard, and because of the tremendous set designs and costumes, I can't call the film a total wash, but it's close. Guido Contini may be working out how to keep his next movie from being a flop, but the irony is, he's already in one. 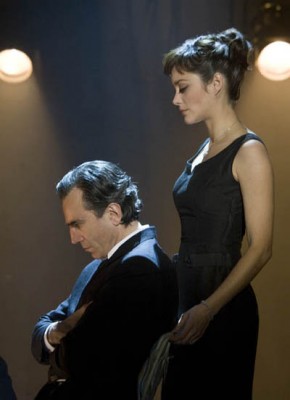